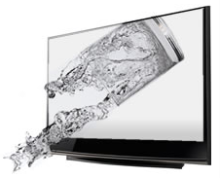 3D Televisions will be on the market in the next few months and the question remains “Do you think 3D Televisions will be as big as 1080p HD was to 480p or Color was to Black and White television? Many companies are riding on the 3D bandwagon and hoping that people want to see their television shows and movies “pop out” of their television when they watch the content. I too enjoy the 3D aspect but have some issues with the fact that the technology either requires shutter glasses (Sony) or Polarized glasses (JVC) both of which can cause eye strain and headaches in people using them.

Games, Movies and Sports are the real winners behind 3D television where you could watch a thrown ball seem to fly out of the TV into your living room or video game weapons seem to reach out and be more realistic. Clearly movies in theaters have already jumped on the 3D bandwagon with Monsters Vs Aliens, UP and several other films released this year in 3D and 2D simultaneously.

I personally don’t know if I want to be having to sit and wear glasses when watching televisions, I think it would be better if there were a way for a TV to have 2 screens and projectors that could allow for 3D perception without the need for wearing glasses. Or better yet some sort of projection system that can create the images out of light like R2 D2 does in Star Wars when projecting Princess Leia to Luke Skywalker.

Clearly 3D will eventually be the future but I don’t think it will be anything but a novelty item for the next few years as people still struggle to keep up with technology and adopt Blu Ray and 1080p televisions en masse. Lets face it, the broadcast networks will need a ton of more bandwith to leverage 3D programming, and the local networks just barely cut over to HD broadcasting.

But this is just my view, what are your thoughts about 3D televisions? Will they be a huge hit or a flop next year and in 2011?