My tests will include providing thermals for an idle unit, then running Cinebench and then running AIDA64 for 15 to get this a little toasty, to see what it can handle.  Check it out.

First off, here are my system specs

After 15 minutes of sitting idle in windows, here is how the temps are looking. 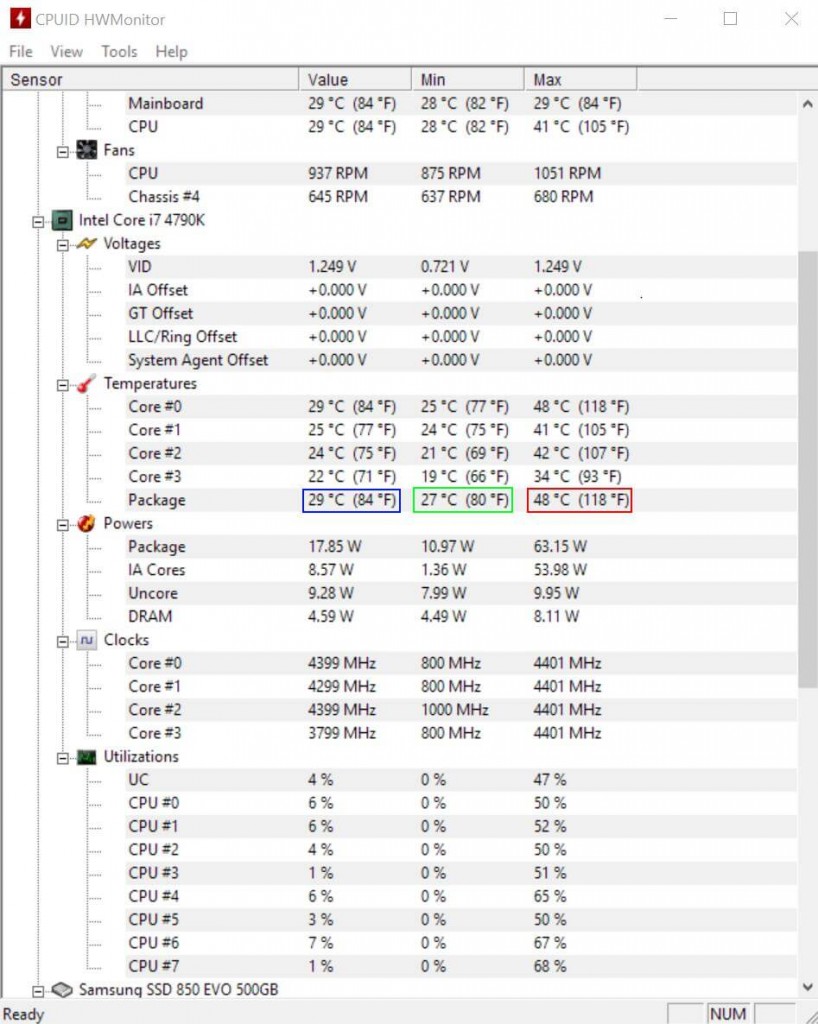 Using CPUID’s Hardware Monitor, we can see the lowest temp the Arctic Freezer 240 hit was 27°C, that’s pretty good, the current temperature was 29°C and the highest temp it hit was 48°C, that’s after windows loaded and started loading the apps.  As soon as my system got into Windows, I started HWMonitor and just let it sit there for 15 minutes. 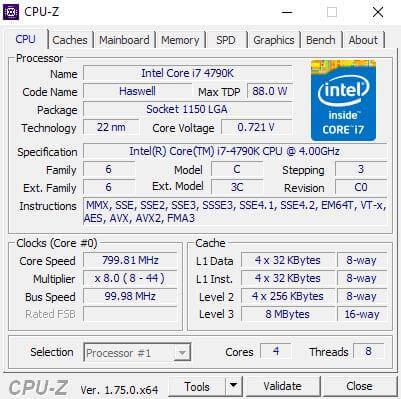 Now don’t freak out seeing my Core speed at 799.81Mhz, this was set in Power Options. 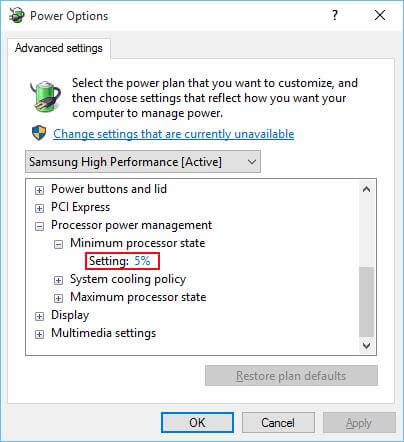 If you want this set, go into the Power options in the Control Panel, click “Change plan settings” then again click “Change advanced power settings” and scroll down to “Processor power management”. Click to expand “Processor Power Management” and click to expand “Minimum Processor state” and you can set the percentage to whatever you would like, I set mine to 5%. When complete, click Apply and OK and you are good to go.

Don’t worry, this will not affect performance at all, the speed ramps up in a fraction of a second.

Also, the temps will be dependent on programs running in the background, in my tests I had (aside from what starts up with Windows 10 by default) PlexTurbo, Radeon Settings, Samsung Magician, Logitec Gaming Software 8.78.129 and AVG Anti-Virus, this is a real system after all, not just a benchsystem.

OK, to start with the first benchmark, we will use Cinebench R15.  Cinebench evaluates the CPU’s performance capabilities using the processors processing power to render a photorealistic 3D scene.  As the program runs, you can see each core (physical and hyper-threaded) load individual frames.  The CPU portion of the test only performs the tests using the CPU. 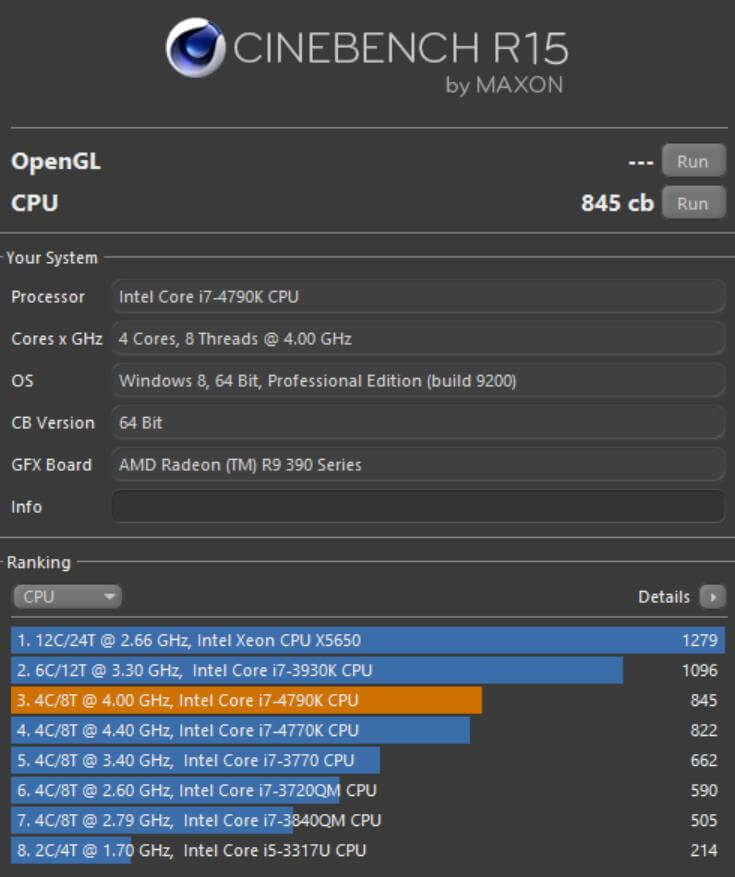 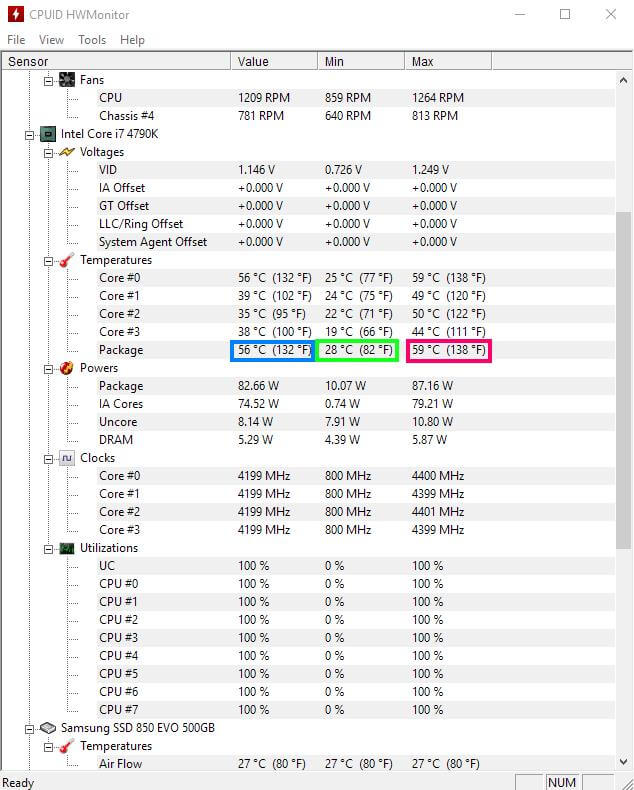 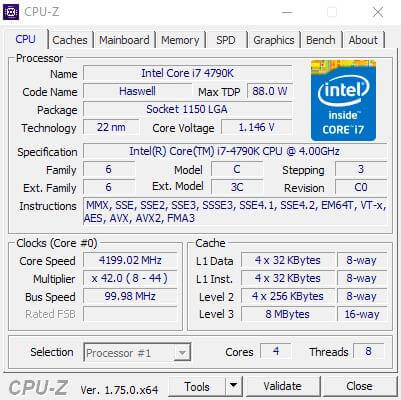 The temperature when the test was done was at 56°C and the max this processor hit was 59°C.  A 15.38% difference from idle temps, but it is to be expected.  Cinebench is a nice program for measuring performance, but let’s build up some heat and do some stressing.

To stress, we will be using FinalWire’s AIDA64 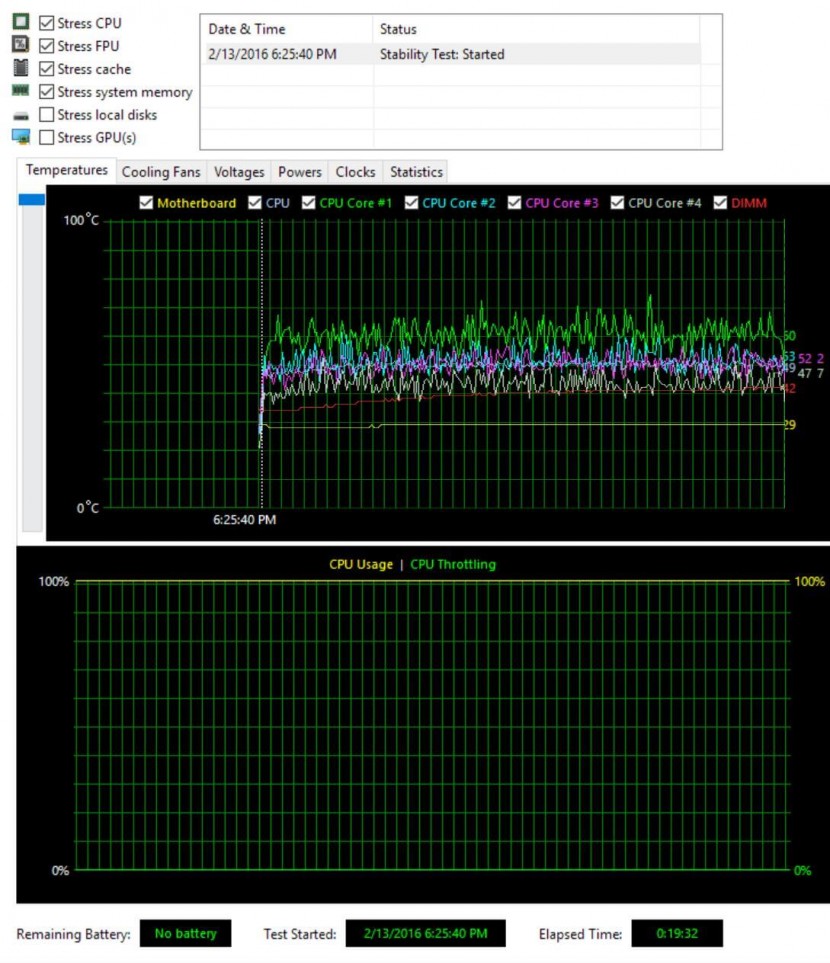 I try to run the test on the machine for at least 15 minutes to get a good heat buildup, though this test ran 19 minutes and 32 seconds and you can see it reached a max temp of 60°C, 1° higher than from the Cinebench benchmark.  You can see that the CPU was running at 100% the entire time from the bottom half of the screenshot above.

How about some comparisons, 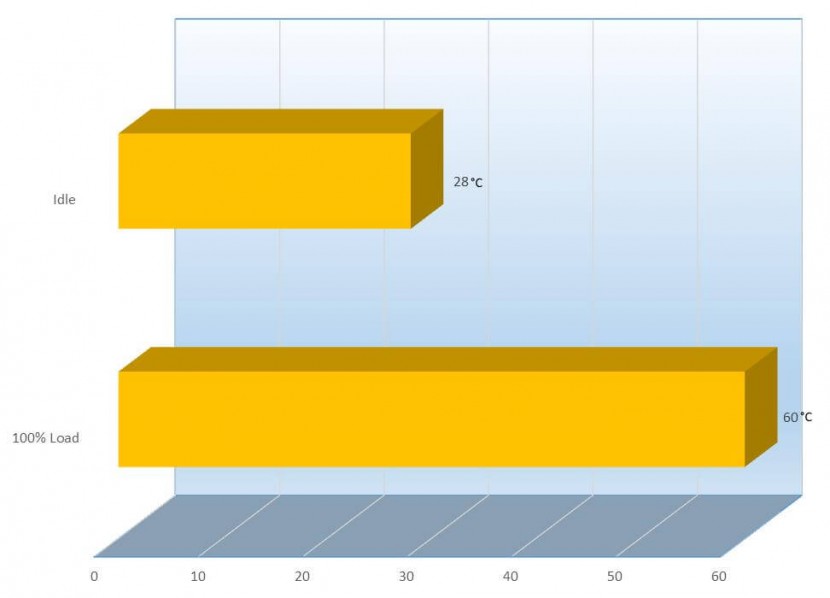 A 75.86% difference between idle and full load, that’s pretty nice.  Each core had its own temperature but I listed only the hottest because that is what will count.

What’s a test without overclocking, well no worries, here it is.  I overclocked this system to 4.6GHz, I will show you the BIOS settings here for the 4.6GHz OC. 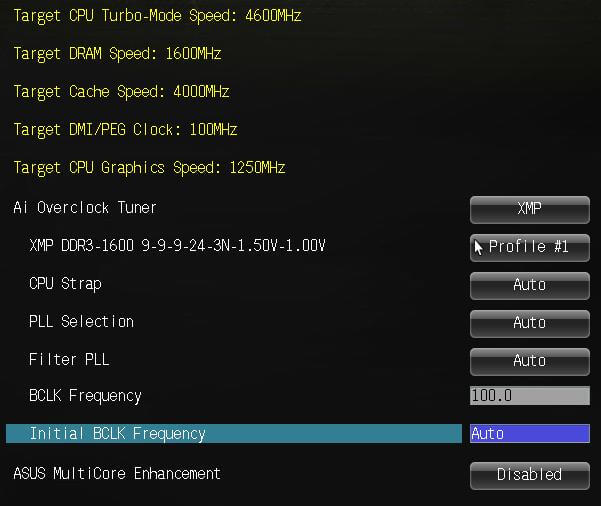 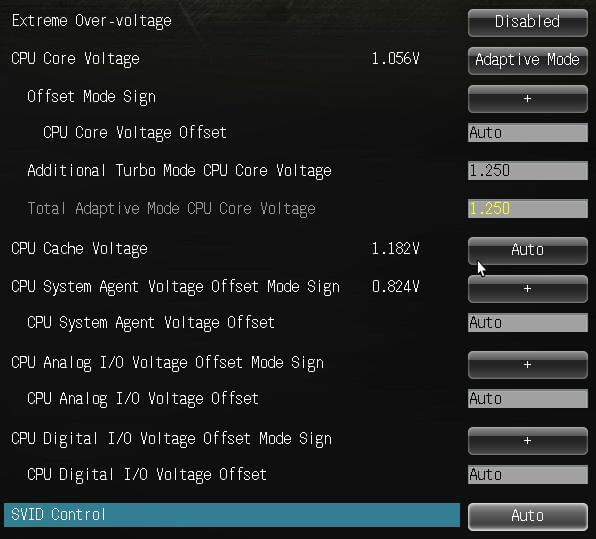 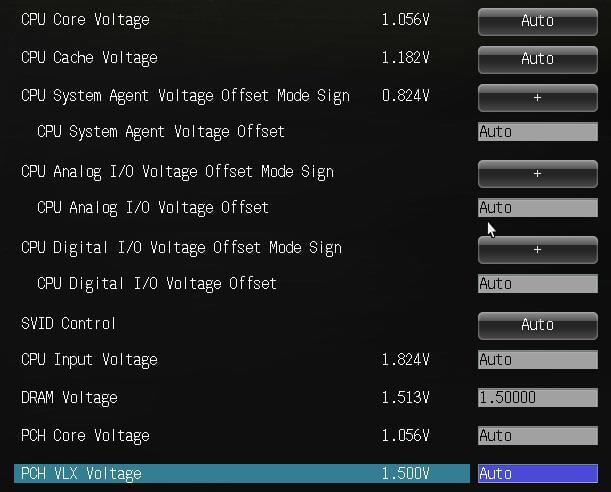 For those of you interested, here are my overclocks, nothing major at all, I know you and I can go higher but this is to give you an example of what it does.

Let’s check out the idle temps 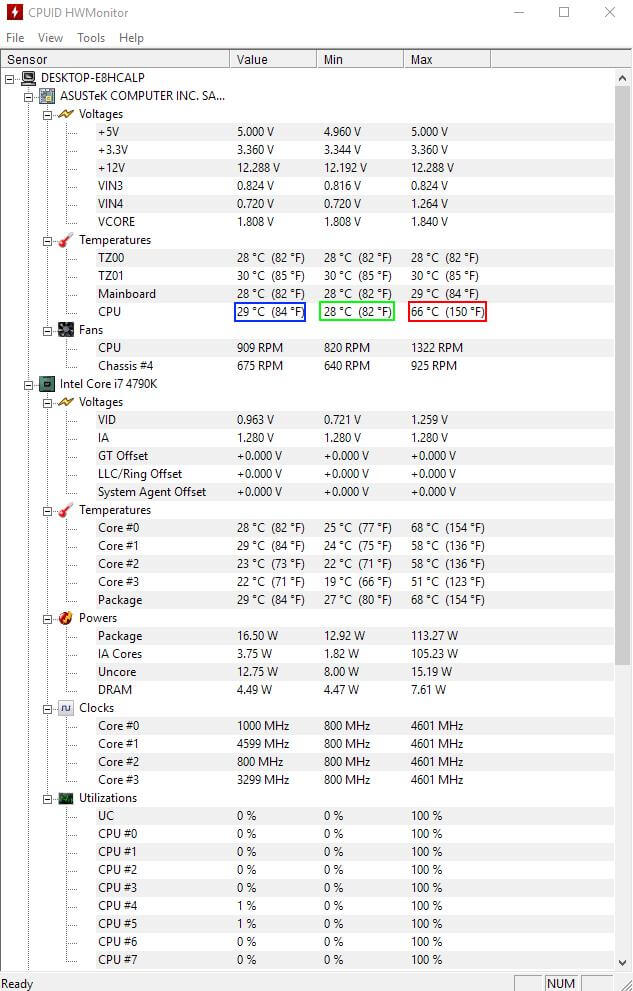 Even though it will be the same as before because of the power profile change, I will list CPU-Z results. 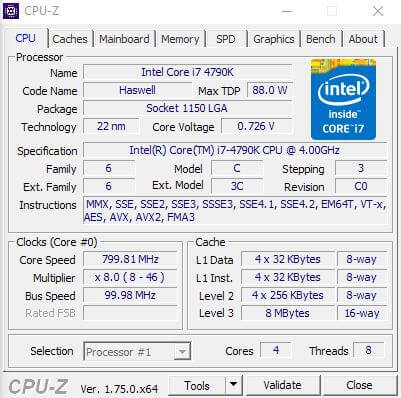 To start things is Cinebench 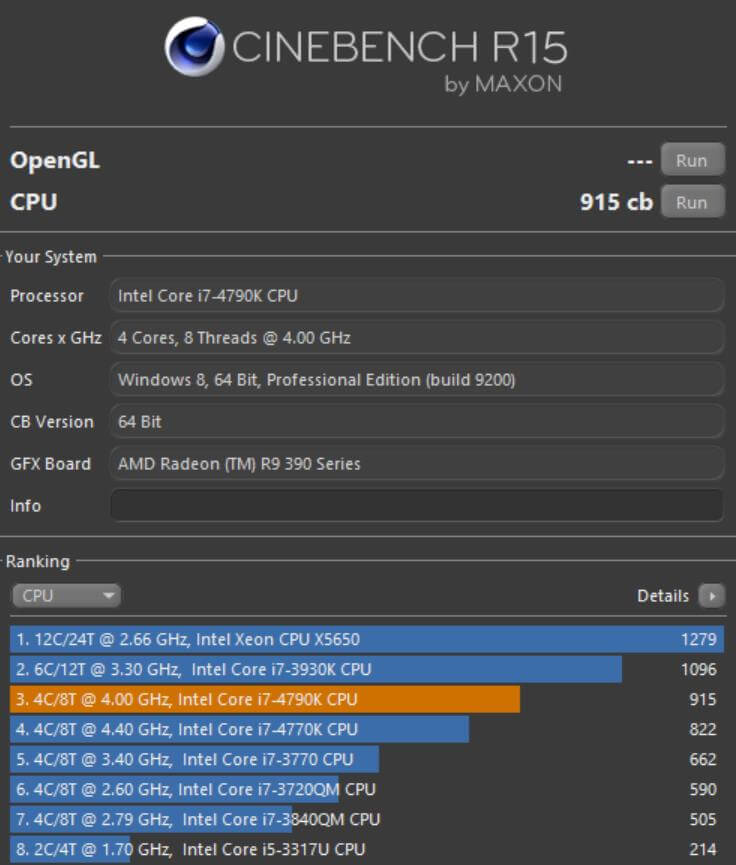 A small bump in the overclock brings us to a score of 915, up from the stock speeds score of 845, a 7.95% increase in performance. 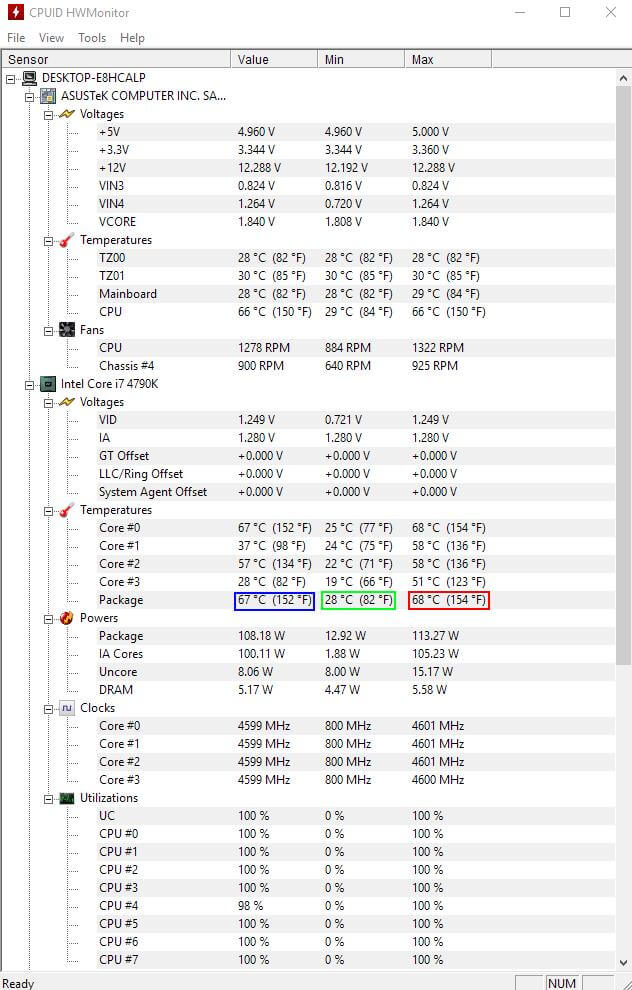 Now for the real test, check out what AIDA64 shows. 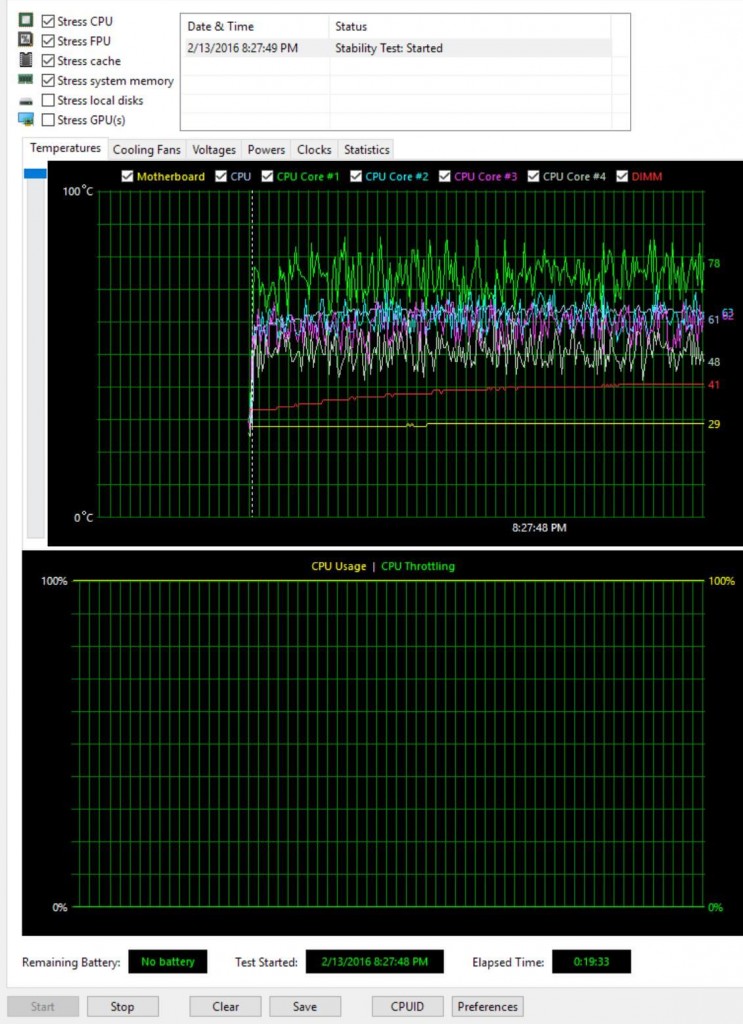 On stock AIDA64 reach 68°C and overclocked 78°C on the hottest core, a 10°C difference 13.70% higher but still manageable. It looks like the Arctic Freezer 240 Liquid Cooler can hold its own.

So let’s throw the comparisons on the graph to see how well it does. 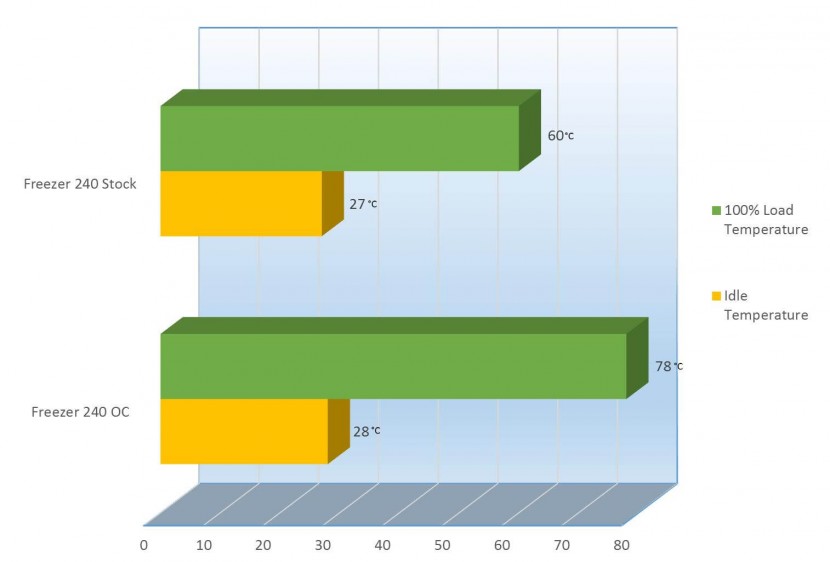 Another good comparison is how well this stacks up to a good air cooling CPU cooler, for this I will refer to my Rajintek Tisis CPU heatsink.

First off, I will compare the stock cooling, I won’t show the pictures here of the above HWMonitor tests, you can see them above, but I will show you the HWMonitor results of the Rajintek Tisis. 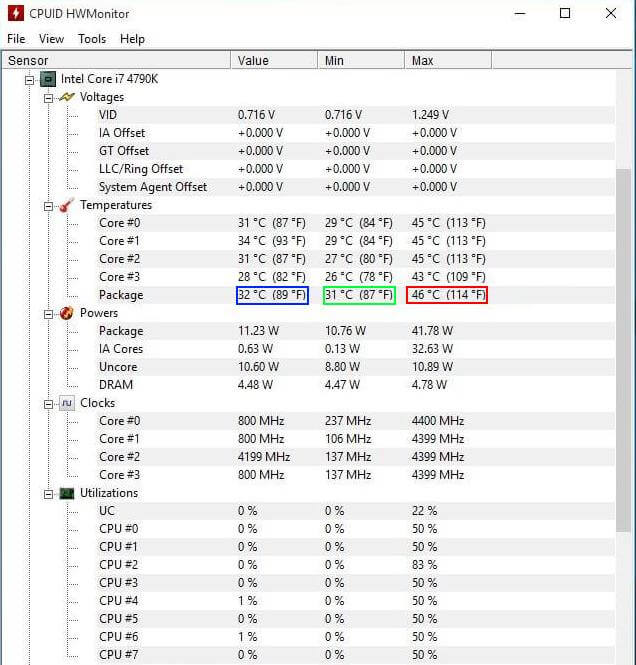 So very decent temps and I do love air cooling heatsink but the idle temp here is 31°C versus the Arctic Freezer 240’s 27°C, a 13.79% increase on the air cooling but this is idle.

Here is the Tisis with the overclocked Core i7 4790K again at 4.6GHz with the same settings at idle.

As you can see above, the lowest idle temp was on the Rajintek Tisis was 34°C versus the Arctic Freezer 240’s 28°C, the Tisis was 19.35% hotter.  Oddly enough though the highest temperature on the Tisis at idle was 49°C and the Freezer 240 was 66°C, in this case the Freezer 240 was 29.57 hotter, I can’t explain it but you haven’t see the real tests, let’s see what happens in Cinebench.  I will compare all 4 temps here. 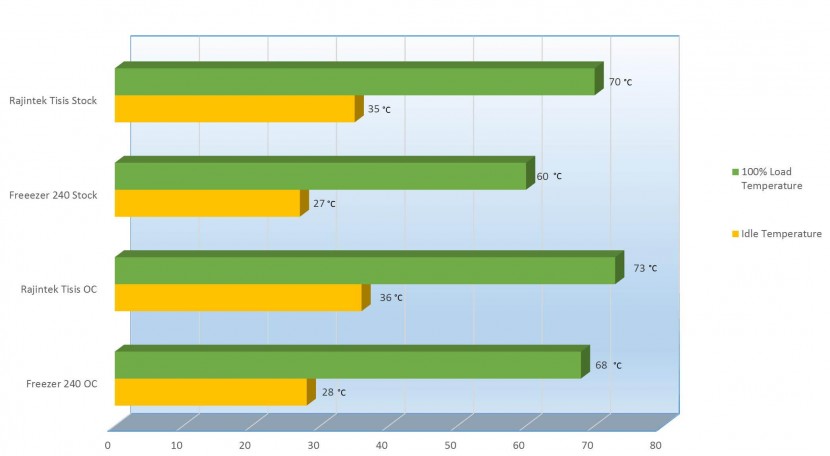 This is a relatively quick test, let’s see what AIDA64 reveals. 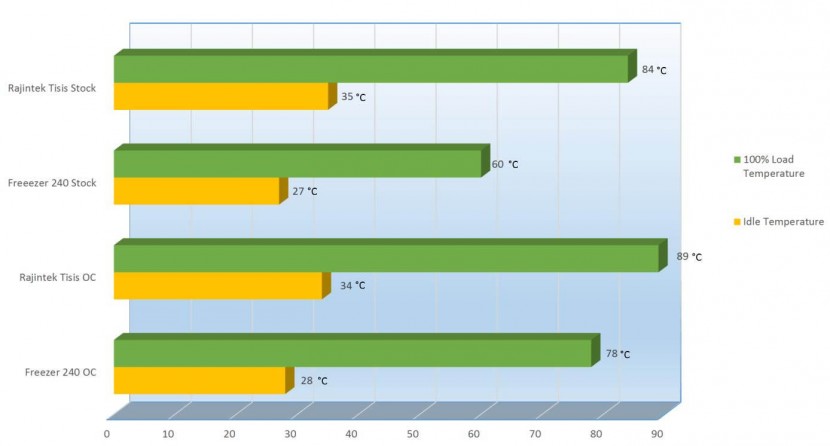 We can see here that when stressed for longer than maybe a minute or two, the heat built up too quickly on the Tisis overclock bringing it up to 89°C but with the liquid cooling it kept it at a chilly 78°C.  Percentage wise, the Arctic Freezer 240 beat out the Rajintek Tisis by 13.17% and again, you have room to go higher.

Now, I know you might think (or hope) that this was the end, but it is not.  When I installed this cooling unit, I placed it on the front of the case, because this Fractal Design Define S could take it, maybe your case can too but this case can also take it on the top, so I will show you how to install it on the top and then also perform comparative testing comparing the difference in cooling from the top and the front, both stock and overclocked.