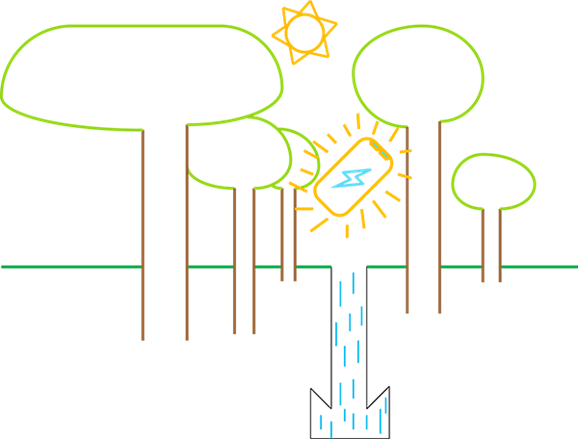 Power banks are to be used for one simple reason, it’s portable power for when you don’t have access to a more stable source of power. So portable chargers can basically be used anywhere and at any time which is why it’s one of the most useful charging electronics on the market because you never have to worry about your smartphone or other devices running out of power while you’re out and about.

With that said, not all power banks are made equally. Most power banks cannot withstand falls, and water, much like our smartphones. It’s vital for a power bank to be built up to a certain standard especially when you’re going into an area that requires the tech that you have to be built for the environment. In this case, I’m talking about the wilderness; where there’s a number of things that can harm your power bank.

Luckily there are a lot of rugged power banks that are built for a rugged environment. Which means that they can withstand water, shock from falls, and dust. Portable power is useful in your everyday life and it doesn’t really matter what kind you get for normal purposes. However, when it comes to hiking, camping, or biking with those actions being done in a more dangerous and secluded environment; you’re not only going to need a power bank but a strong enough one too. 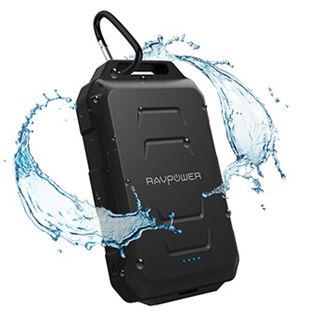 This RAVPower Rugged power bank has got to be one of the best built and designed power banks for the wild world.

The power capacity of the RAVPower Banks isn’t the best for long durations in the wilderness because even though the initial power capacity is 10,000mAh it still has to go through a conversion during charging; which can result in about 4,000mAh being lost during charging. It’s for a single hiking day trip.

The Design and Build Quality

It’s surprisingly lightweight and a small power bank with just a length of 4.6 inches and a thickness of 7.6 ounces. This is surprising considering that rugged power banks, with their reinforcements, usually tend to add more weight. One of the most reliable aspects of the RAVPower Rugged power bank is that it uses a Lanyard hole at the top and that’s where you can place a rope or a carabiner through and connect the power bank to a backpack.

On the build side, the Enclosure rating of this power bank is IP66 and that means it can withstand powerful water jets of water and dust when the charging ports are covered by their flaps. With that said, the power bank cannot withstand immersion into water and doing so would damage the portable charger. It can also take falls onto a hard ground. 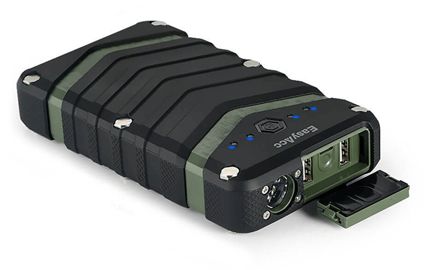 This is EasyAcc rugged power bank has a power capacity of 20,000mAh and it’s going to be much better for those outing of adventuring. Since this way, you’ll be able to charge most smartphones about 6 times over, and if you have any other small electronics that you take with you while you’re in the outdoors, those should be able to charge multiple times over. So the longevity of the power bank can last for days and it’s quite good for camping.

One of the main flaws of this power bank is that it doesn’t have any lanyard holes on it where you can hook a carabiner onto it. As a result, the portability with the power bank can be quite tedious because you then either have to hold it or place it in your bag when you’re on the move.

Of course, when it comes to building quality, all of the power banks on this list are going to be a shock, water, and dust resistant. It’s just a matter of how resistant they are. In this case, the degree of withstanding water and dust sits at an Enclosure rating of IP67 and that means the power bank is not only dust and waterproof; it means that it can withstand immersion in water for 30 minutes continuously under 1 meter of water. 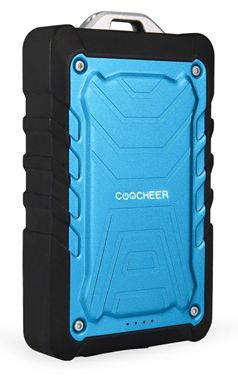 Not exactly the highest power capacity that you’ll need when going into the wild but this Coocheer power bank does well enough with its power capacity of 7,500mAh but don’t expect it to last for a week. Most likely just a day and a half will be its limit. There are two charging ports and similarly to the other power banks on this list, one has a charging speed of 2.1 Amps and the other one has a 1 Amp speed.

The CooCheer power bank looks like it’s built like a tank and well, it kind of is and it kind of isn’t. It can take falls no problems because it has a large and thick rubber lining that goes around it, as well as an Aluminum shield on the front. However, the waterproofing is quite limited to just sprays and medium pressure water jets which places the Enclosure level at an IP65 enclosure rating. With that said, if you’re venturing into a dry climate, then this power bank would serve you well because of its strong resistant from shock damage.

It’s rather bulky but a small power bank as well. Thankfully it has a lanyard hole that you can use a carabiner with to attach to your backpack.

Specs of the Coocheer Power Bank: 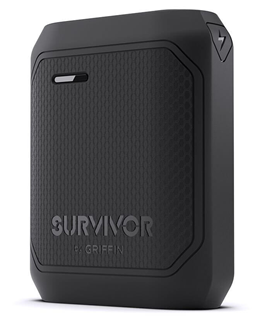 It’s built to take falls up to 6 feet no matter what you’re dropping the power bank on. Once the charging ports are covered the Griffin Survivor power bank has an Enclosure rating of IP66 which means that it take powerful jets of water and it’s also dust-tight then.

For a 10,000mAh rugged power bank, the Griffin power bank is quite small because it only has a length of 4.9 inches and a width of 3 inches. So it’s small. With that said, that’s all that its portability is good for. This is because there aren’t any lanyard holes that would make using this power bank easier. 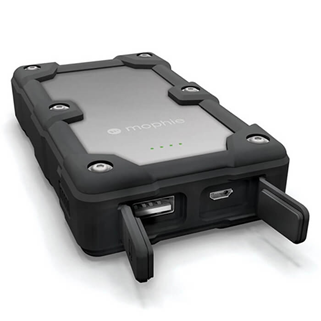 This Mophie PowerStation Pro is last on this list not because it’s bad, otherwise, it wouldn’t even be on the list anyways. No, it’s on this list because it still holds all the features that a rugged power bank should just at a lower point. This is because it has a power capacity of 6,000mAh and has a single charging port to match.

So the powering capabilities aren’t really meant for the long-term but can be useful for a single day.

It’s built very well and I’m talking about how it can take falls very well. It has a very large outer shell that can protect the power bank from both high and shortfalls. On the dust and water protection, the Mophie power station has an Enclosure rating of IP65, which means that it can water that is projected from a nozzle and is also dust-tight. With that said, this isn’t the type of power bank that will be protected if you have a large amount of water splash around, and it will not survive if it’s submerged in water. 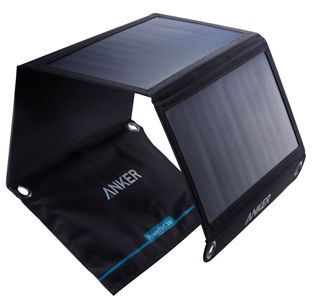 There are also solar chargers that can be very useful to use in the outdoors because that’s where you’ll be able to get the most sun exposure. However, it’s important to know that solar chargers are not solar power banks, and they’re not even power banks, to begin with, because they don’t hold a power capacity. What they do have are large and multiple solar panels that are able to more efficiently capture light and turn that into energy you can use to charge your devices.

The solar charger is the Anker PowerPort Solar and it’s quite amazing at what it can do. Even though using sunlight to power the charger would provide the most efficient results for charging, PowerPort solar can still work from lights like lamps. There are two charging ports, and each of them is capable of Output a charging speed of 5V/2.4A and the Max Output is 3 Amps all at once.

Specs of the Anker PowerPort Solar: