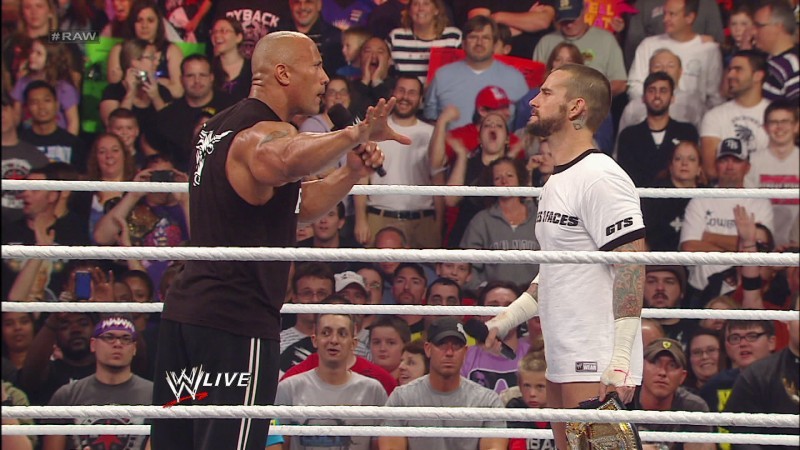 Lately, I have taken an unexpected twist in television entertainment and set up WWE’s Monday Night Raw to record on my DVR. Ever since I started to watch the show, I have gotten comments from friends and family saying “You know that’s fake, right?” or “WWE is just a male soap opera.” The people making these claims are comparing WWE (World Wrestling Entertainment) to MMA (Mixed Martial Arts), which is technically like comparing apples and oranges, but not on the surface.

I’m not arguing that WWE is 100% legitimate and unplanned (which is what they want it to look like when you watch it on TV), but I’m also not arguing that it’s 100% fake and planned. Honestly, when looking at the question is WWE fake? You have to keep in mind that WWE is designed to be entertaining and fun to watch for the people who like to see the drama between the superstars instead of the pure blood and sweat in MMA fights. MMA, on the other hand, is considered a sport just like boxing, golf, or baseball. Therefore, it’s really hard to compare the two against each other; it would be like comparing NASCAR and Fast & Furious.

I’m really only familiar with Monday Night Raw, but drama exists in Smackdown and other WWE programming as well. In the case of Monday Night Raw, each show takes up a 3 hour slot on the USA Network. After commercials, the meat of the show is probably 2 or 2.5 hours long, which is why I record it and fast-forward through the commercials. I don’t have time to sit down for three hours on a Monday and waste away my brain to WWE. However, I can do that on weekends after I’ve recorded the episode for the week.

Before any action happens on Raw, there is always drama and smack talk between two or more WWE superstars (what they call the wrestlers). This is not the average behind-the-dugout smack talk that you would find in legitimate sports games on ESPN. The drama that occurs before the main fights on Raw takes place front and center in the ring with each superstar holding a WWE microphone. The smack talk is probably planned out and rehearsed backstage just like any good action movie, but that doesn’t necessarily make it unentertaining.

Personally, I often find myself fast-forwarding through a lot of the drama because it’s very monotonous if you keep up with the show each week. However, people that are really into the show can watch it live on Monday nights and tweet to @WWE or use WWE hashtags to see their tweets pop up on the show. For them, this is probably very exciting to be able to interact with the “WWE Universe” live, but since I record the show and watch it later, I can’t participate in the Twitter madness.

The Fighting: Real, but Most Likely Planned 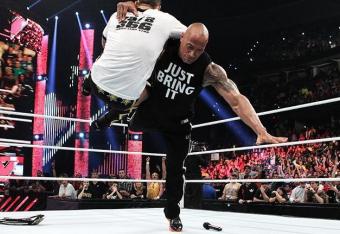 When people compare WWE to MMA, they are most likely comparing the actual fights. In MMA, fights are very brutal with blood normally on both fighters by the time it’s over. In WWE, the fights focus more on slamming or using “moves” rather than punching and kicking like in MMA or boxing.

I can’t say that the fights are totally unplanned, I’m sure everyone on the WWE staff knows the outcome before the episode of Raw even starts, but it does take skill to do what these WWE superstars do. For example, when 218-pound CM Punk is picked up by 260-pound Dwayne “The Rock” Johnson and slammed to the ground, there’s no way they can “fake” that with special effects. Many WWE superstars perform moves like choke slams that require picking the recipient completely off of their feet and slamming them onto the mat (seen on picture to the right). I don’t know about you, but I sure can’t pick up a 218-pound man over my head.

The one thing I have noticed with the more novice WWE fighters is their inability to fake punches and kicks. The slams are definitely real, but a lot of the punching and kicking that goes on in WWE is light or nonexistent, but intended to look fatal. If you watch some of the rookie superstars, you will notice that they don’t even punch their opponents, yet the opponent will fall down. Even from across the living room when Raw is playing back full-speed, I can tell that the punch was 2-5 inches away from the opponent’s body. I’m sure if it were to be played back in slow motion, it would be pretty embarrassing for the person throwing the “punch.”

So is WWE Fake?

The simple answer is yes, WWE Is For Entertainment Only.

Even though the drama is fabricated (who knows, maybe The Rock and John Cena are friends outside of WWE) and the punches/kicks are faked, I still find the entire show entertaining. If you think of it as entertainment, it will be exciting for you. If you try to compare it to MMA or professional boxing, WWE will look like children pretend fighting. Like I mentioned earlier, comparing MMA and WWE is like comparing NASCAR and action movies like Fast & Furious. Although NASCAR is 100% unplanned and very, very real, Fast & Furious (which is created using green screens, they hardly even drive the cars) still has a large fanbase.

In addition to being entertainment stars on WWE, a lot of the wrestlers do things other places. Many of them are movie stars elsewhere (such as The Rock) and some have gone down different routes (for example, John Cena has released a rap music album), but all-in-all, these wrestlers you see on WWE are here to entertain, not to be MMA athletes.

For more information on what exactly is real or fake in WWE matches, see Huffington Post’s breakdown.