This past week DragonBlogger.com crossed 30,000+ approved comments, yes all Disqus comments finally synced which is why the number finally pushed over 30,000 or else it really would have been reached in December.  The site has grown tremendously over the years and becomes bigger, with more articles, comments and weight on the database it is always good to leverage tools like WP-Optimize to cleanup your database tables, Revision Control to keep the number of post revision copies in check, at one point I had over 1,000+ post revisions from all my various writer drafts, posts and such that needed to be cleaned up.

When looking back at the most popular articles it is no surprise that all of the top articles were giveaway ones, where commenting was an entry method.  This allowed many articles to reach over 400+ and one to reach nearly 700 comments.  In fact, the top 10 articles based on comments were all giveaway articles.

Giveaways tend to be short lived as far as purpose and use, a giveaway article has a live span based on the length of the giveaway and then becomes a relic in most cases.  Many of my giveaways are product reviews + giveaway combined so when the giveaway ends the review part is still relevant to readers who can find the article online.  I don’t always follow this but sometimes I do. 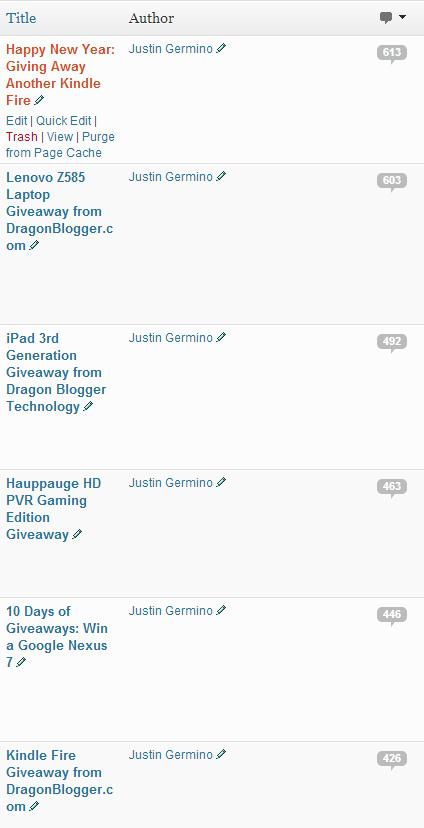 Over the past 4 years I have adapted through various commenting systems, WordPress Default with CommentLuv, Livefyre and lately Disqus.  I found benefits and limitations to all commenting systems I have used so far so can really tell you that find and figure out what you like best and stick with it for a while until you don’t like it anymore.  Each commenting system has a purpose and depending what you are looking for the system you choose can help you get those features.

I still love CommentLuv even though I don’t use it, the idea of letting readers showcase their latest blog post was appealing, rewarding them with a DoFollow link after they became a loyal commenter was a cool incentive and they are incentivized to do more sharing of your article by having to like, plus one or tweet the article to have more articles to choose from in the drop down list.  The GASP, KeywordLuv, ReplyMe features are all just icing on the cake and bonuses to a great plugin.

Livefyre and CommentLuv both are external commenting systems designed around single sign on and authenticate user and they can comment on any peer site using same commenting without having to enter username/site/email over and over again.  They also offer social media integrations by helping you track the number of shares (reactions) on social media and even can read in conversations made to the article in social media back into the comments section of the blog (Livefyre is better at this).  Real time commenting where comments flow in and can be replied to in real time without refreshing a page make live chats on a blog via comments possible which are not with default WordPress commenting system.

Unfortunately there is a trade off, when the comments are not hosted on your site you can suffer from sync issues where the comments aren’t synced back to your WordPress database, users can sometimes have issues signing in to leave a comment, browser support and sometimes script load of the external commenting can be slower.  In the end I found Disqus to be the most flexible, though Livefyre comments 3 when it is finally released publicly may pull the tide back for me.

Facebook commenting is also a system many bloggers are putting in either with Facebook commenting or by itself.  I do think if you are highly active on Facebook and have a lot of fans this can grab more attention but the critical problem of not being notified when a comment is made on your post and limited moderation abilities negate it’s usefulness.  I have had only 1 user in the past 3 months complain they couldn’t get to my comments while using Disqus, they were running Firefox on the Mac and It worked when they used Opera on the Mac.  I had many users complaining they couldn’t sign into Livefyre when I used that commenting system so the complaints and issues seem to be much less with Disqus.  I will say Livefyre was more reliable syncing comments to my WordPress blog until I implemented some fixes like Alternate_WP_CRON and a crontab entry for the Disqus which will be showcased in a later article.

Years later, I still get flak from fellow bloggers about not using CommentLuv anymore but I just found the spam I received was too high and moderation time too much to keep the system in place.  I may end up switching back at some point when the feature set finally hits an amount I have to try again, but it won’t be until I put the site on a new and leaner theme if I do.