How to build a PC inside of the Cougar Panzer

In this section, we go over building a full PC inside of the Cougar Panzer case.

Here is a list of the parts I used in this build:

So far so good in the build.  Now we run into installing the board and more.

In that video, I show you how to align the board to the I/O shelf and how to screw in the motherboard to the stand-off’s.  The stand-offs are used so that the bottom of the motherboard does not touch the case, the board touching the case will result in your board getting shorted out or worse.  My particular motherboard is an E-ATX board, and if I used 3 or 4 video cards, I might have had to use the additional 6Pin PCI-E connection and I would have run into an issue since it is on the board at a 90°C.

In this video, I also show you that there is a potential issue if your board is an E-ATX board or CEB and the 24Pin power supply connection and/or SATA connections are at a 90° angle.  I was able to install the bottom 5 SATA connections, but if I had more drives,… I would have run into an issue.  I did have to bend the right side of the case a bit so that I could plug in my power supply in the ATX 24Pin connection. 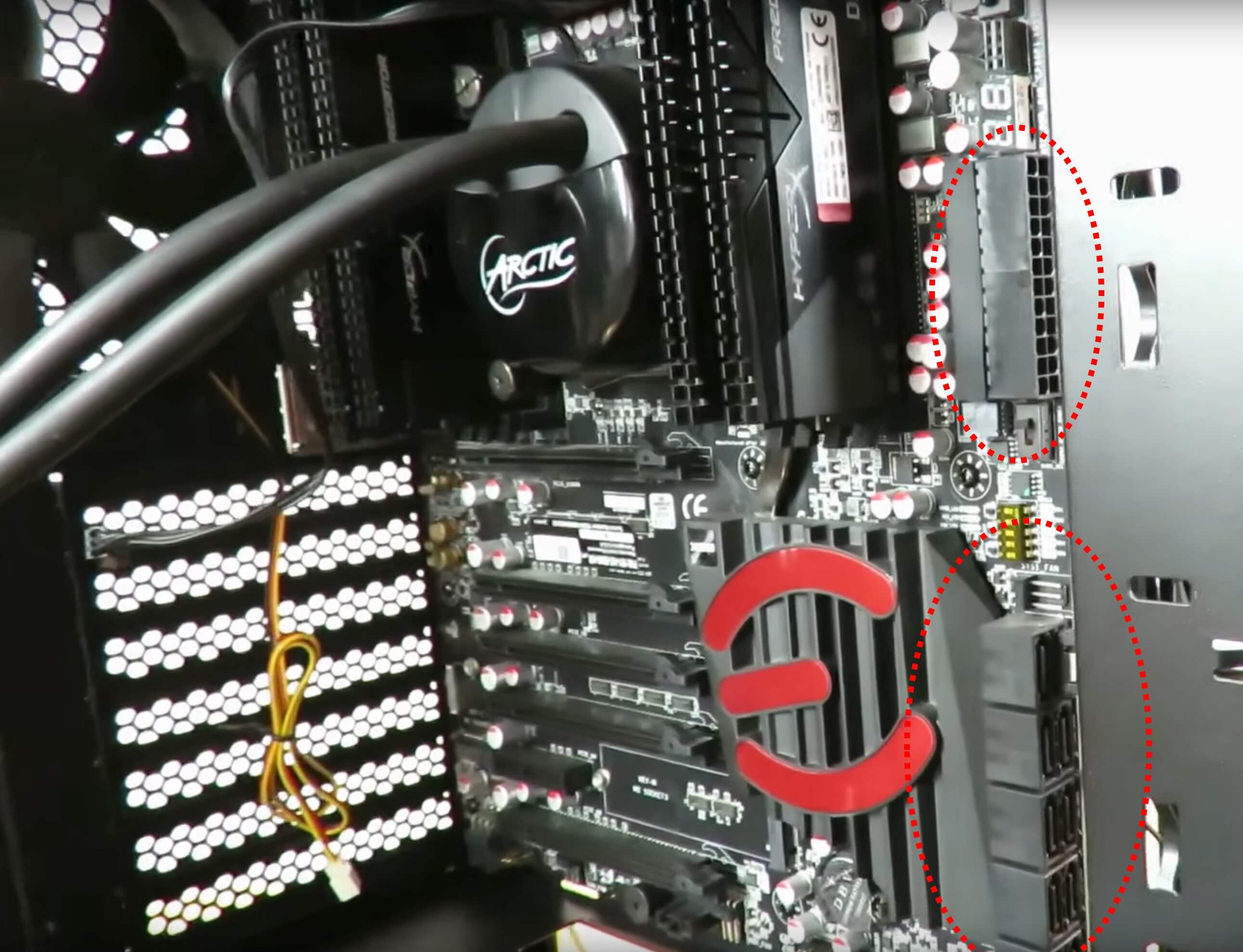 I move on to install the liquid cooling unit’s radiator and its 4 fans onto the front of the case.  I had to install it onto the front of the case, rather than the top of the case due to the tall memory I was using bumps into the fans on the radiator.  If you have a lower profile liquid cooling unit or lower profile RAM, you will not run into this issue.  I finish off the video, removing the slot side cover.

Let’s move onto the final video on the build.

Like most cases today, the power supply slides into the bottom of the case, but a little different than most.  When you install your power supply, you would slide it in, then hold it in place with the power supply bracket, rather than pushing into the case then sliding it back like most other cases.  Don’t worry, I show you in the video how that works.

That was the easy/quick part, building the PC, now one of the most time consuming parts is the cabling but I will show you how I did it as well.  Let’s move onto the cabling.

In that video, I showed you how to plug in the 24Pin ATX connection.  Remember I mentioned that I had to bend the case a little to get it to work on my particular board, if you have an ATX sized motherboard, chances are you will not run into this issue.  After that, I show you how to install the 2 x 8Pin CPU power, most boards only have either 1 x 8 Pin or 1 x 4Pin CPU power, but this motherboard has 2 for better overclocking providing more power to the CPU if needed.  A quick and easy one, I show you how to connect the rear 120mm fan onto a 4 Pin header on the motherboard then the fans for the liquid cooling units.

Then we get to my memory, I forgot to plug in the additional connections for my power supply, so I had to pull the power supply out and plug all the rest of the cables in that I would use.

I had to also flip over the 2nd mechanical hard drive, the bottom one so that the power cables could plug in easier.  On this power supply the power connections are a little too close, so I did this so that we can reduce the amount of cabling needed.  I ended up flipping the configuration of the SSD’s around a bit, I moved the Samsung SSD from the front of the case above the power supply to behind the case to make cabling easier as well.  Then we connect all of the motherboard headers as well, the reset button, power button, HDD and Power LED lights and the USB 2.0, USB 3.0 and Audio connections as well.  Now let’s jump to the 2nd video in the cabling series.

In this video, we finish off installing the USB 2.0 and Audio headers and we started connecting the SSD’s and HDD’s data cables to the motherboard and also the power connections to the drives as well.  After everything is connected, then we make it look nice by using some Zip ties. 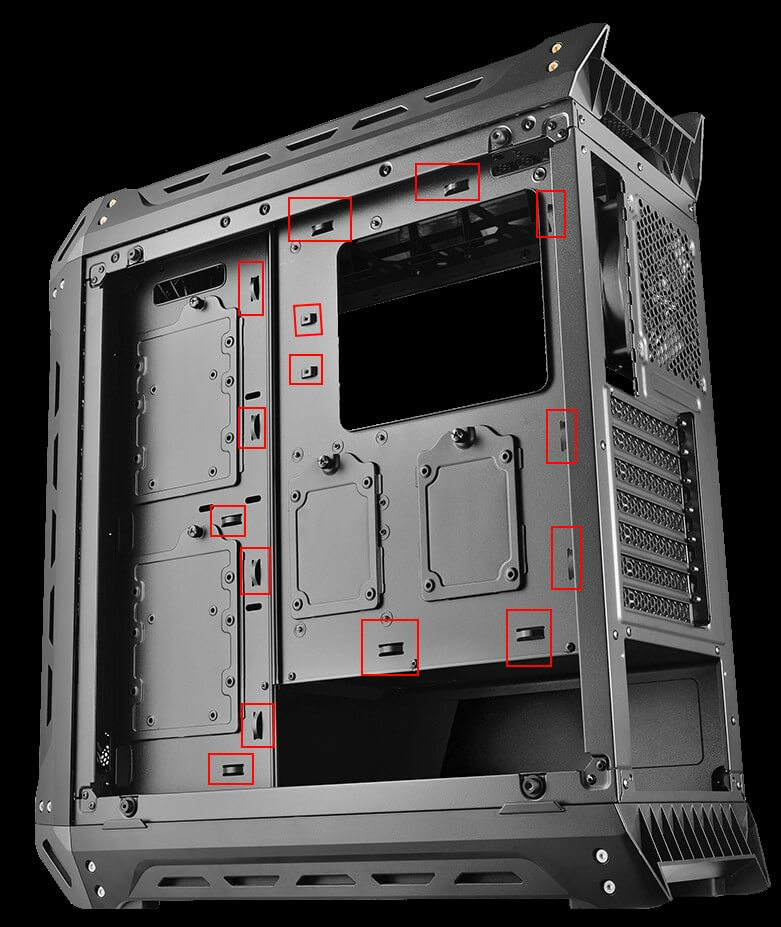 The case has groves to allow you to zip tie the cables to the back of the case to make things look nicer when routing cables, I marked them in the picture above.  While cleaning up the cabling, I also routed the PCI-E cables to the video cards.

I went off of camera because of how long it can take, but here is the final product. 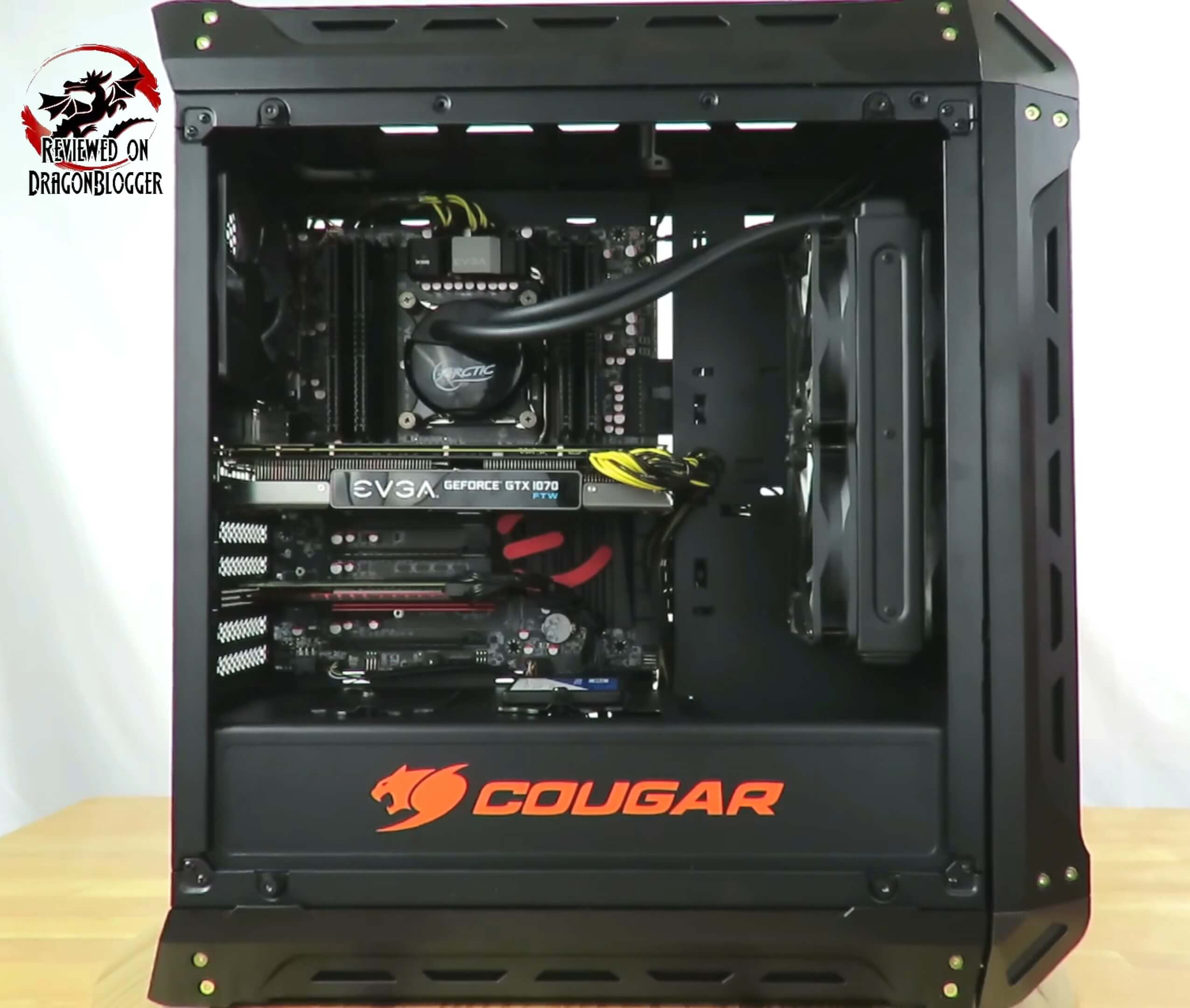 And here is how the case looks like on the back. 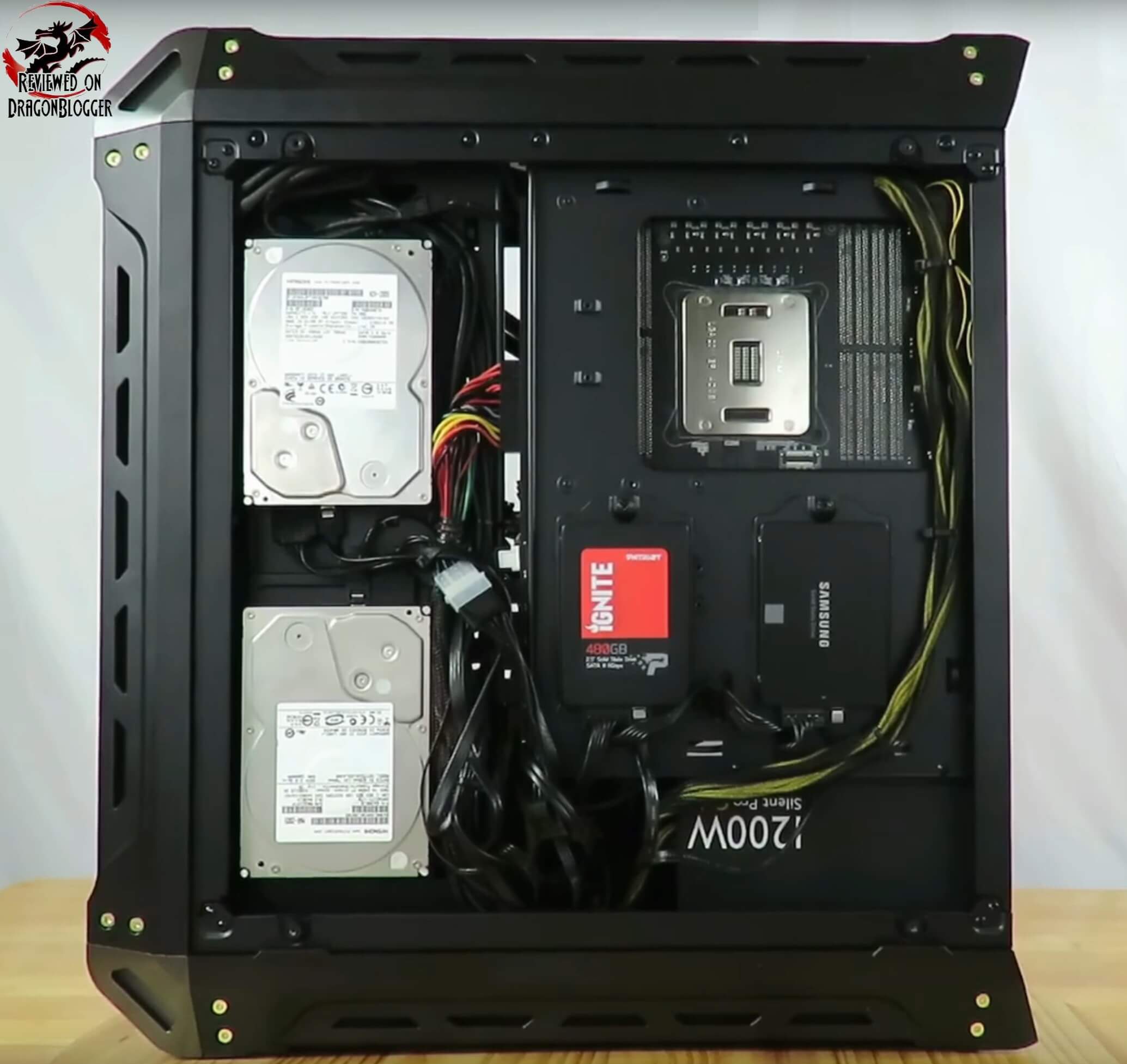 With all of these fans and hard drives, how loud is the Cougar Panzer?  I recorded video so that you can check it out.

Let’s bring it all together and see what my final thoughts are on this case, and I ask you to please chime in as well.