A few months ago I received a coupon card in the mail from Google to test AdWords campaign and I was given a $100 credit for signing up.Â  I decided to take Google Adwords through its initial paces and see what it does for my traffic.Â Â  I want to let everyone know that other than logging into AdWords and building campaigns and doing some keyword research, I have not done any reading or tuning with AdWords.Â  I am not an AdWords master and there are better ways to sculpt campaigns to make them more successful, this was just a basic trial run that I did for my DragonBlogger.com site. 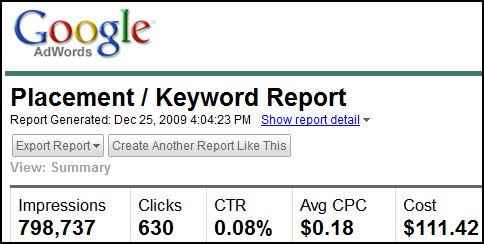 This campaign netted me almost 800,000 impressions for my advertisements but less than a tenth of a percent click through.Â  Though this was still 18 cents CPC and totaled about 630 clicks in the span of about three months.Â  I ran several campaigns and my most successful was the one promoting my NBC Heroes Reviews, then I ran a campaign specifically promoting my review of SponsoredTweets hoping to get some conversions and referrals, (I have no evidence I earned a single referral from an AdWord click through), and one for my Dragon Blogger Technology and Entertainment portal homepage.Â  Though I can see from Analytics that my site has received traffic from Google Ad Clicks, it showed only 228 visits from “Googleads” which means that most of the traffic isn’t reflected in analytics, or is coming from other sources which I haven’t been able to figure out yet.

I myself don’t think that the $100 would have been well spent based on such little traffic to just get that few visits and readers to my blog, now if I had a product to actually sell and 1% of those visits turned into sales, and your product sold for $20 you would have paid $100 in advertising and have netted about$120 in sales.Â  In this case I probably would have continued it and tweaked the keywords to capitalize value, but in my opinion AdWords works best if you are promoting a product or affiliate and doesn’t appear to be ideal to bring in regular readers to a blog.

I could be wrong, but my RSS subscribers, comments and blog visits all remain relatively unchanged since prior to running my AdWords campaign, and Analytics still shows the same 71% of my traffic coming from organic Google Searches.