I have considered numerous times over the past year on getting some sort of personal protection device for my wife. These include either some type of Mace pepper spray or a Taser. The reasons for this are completely logical, my wife for her business has to work to the late hours of the evening, and she often leaves her business and walks to her car alone after 10pm at night. Also for our production company we often visits venue’s and rock bands at clubs and bars until 2am, and leave these places to encounter drunks and rowdy sorts in the parking lots. I had a choice to get a weapons permit and carry it, but I don’t want to be responsible for killing someone honestly, so I think a Taser is the most logical choice.

I browsed PlanetMace.com’s website and found what would be the ideal personal protection device: The M18 Advanced Taser. This device shoots probes up to 15 feet that can penetrate and work right through any type of clothing including body vests and bullet proof vests. It comes with 2 cartridges and a carrying strap. Walking around with this device I would feel confident that my wife would be able to properly incapacitate her attacker, then use her cell phone to call for assistance or get to her car and drive away.

Here is picture of the M18 Advanced: 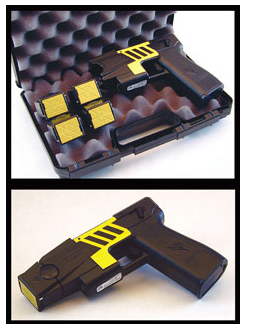 I myself would walk around and carry it, I would recommend anyone having one. My mother used to ride the subways in New York to work at very early morning hours and late afternoons, this was before Mayor Giuliani took office when New York was a much more dangerous place. I would have wished Taser’s existed back in the early 90’s so that she could carry one. I knew a friend who was robbed in NY for his walkman back in 1992, and had he had one back then he might have avoided such an incident.

You never can be too careful, Mace Spray is useful for close range, but I would prefer a Taser personally, one that fires probes, or even a close range one. That shock can penetrate clothing as well, and if someone comes up on you, you are better able to defend yourself with a personal range device than a ranged weapon.

Think about it, if you find yourself or your family spends some time after hours, why not have a personal security device just for piece of mind.