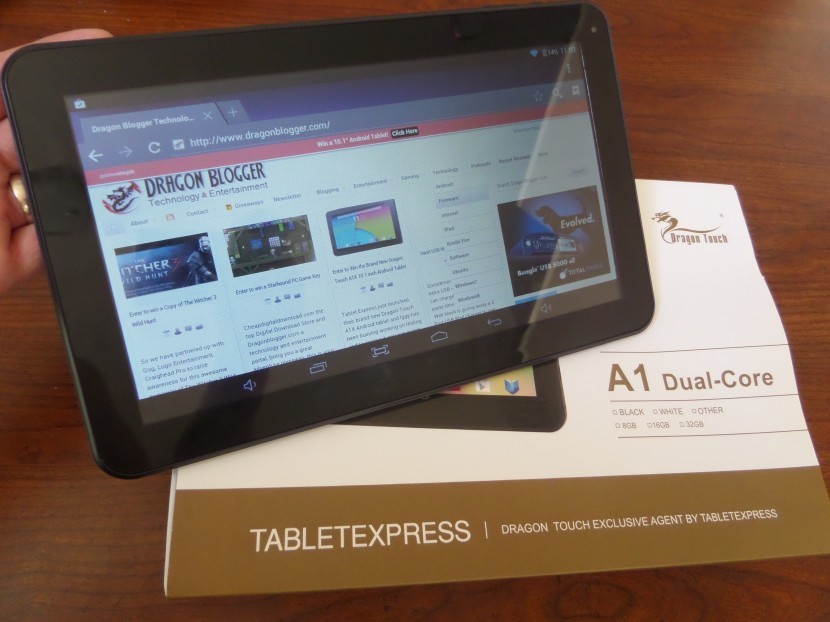 Hey there friends.  Our good friends at Tablet Express have provided the DragonBlogger team with the Dragon Touch A1 Dual Core 10.1″ Tablet to try out and review.  Now, while there are many brands and variety of tablets for the everyday consumer, Tablet Express is looking to carve a piece of that market for themselves with their very affordable Android powered tablets.  While there are some things that the Dragon Touch tablet does extremely well, it’s does lack in certain areas.  What the table lacks, it more than made up for in price.  So before we go into my experience with the Dragon Touch A1 Dual Core 10.1″ Tablet, let’s talk specs.

And here’s my unboxing video for the Dragon Touch A1 Tablet. First thing, the design.  The design is sleek and appealing.  The front facing side of the tablet is a crisp looking black and the rear side of the tablet is a solid white with a very spiffy looking Dragon Touch logo right in the center.  The front facing camera is discretely place on the top right side of the table and the rear facing camera is on the opposite side of front facing camera.  Sound emanates from 2 horizontal slots in the back of the tablet.  Along the sides, is the power button, 3.5 mm jack for headphones, AC adapter port, Micro USB port, and a Micro SD memory card slot.  On the top of the tablet, you’ll find the volume buttons and the return to previous page button (I incorrectly thought it was to toggle between the front and rear facing cameras). That return to previous page button is especially useful while browsing the internet.  With a click of a button, you’re taken back to the previous page. In my opinion, it’s better to tap a button to return than to tap a screen.  At 10.4 inches long, it is definitely one of the bigger tablets out there.  The only problem that I had with the design is that the sound comes out from the back of the tablet.  When listening to music or playing videos, the sound is drowned out a bit since the sound is moving away from you.

The Allwinner A23 CORTEX A7 Dual Core 1.2 GHz CPU is a huge plus for the Dragon Touch A1 tablet.  Games and apps run very smoothly and web pages load up fairly quickly.  Of course, internet speed all depends on your WiFi connection and network so your experience may vary but rest assured that you will not find much loading times when viewing videos and playing games.  A good reason for that may be because the games and videos are not being displayed in HD but I’ll talk more on that later.  Another great plus is where you can get those apps, the Google Play Store.  Running on the Jellybean Android System, all of what the Google Play Store has to offer is at your finger tips.  You can easily access the play store and have apps up and running in no time.  And, because you can expand your storage space via the Micro SD slot, you’ll have loads of space to download and customize your Dragon Touch tablet to be truly yours.  And as for that Micro SD slot… Not only can you expand on the memory of the Dragon Touch A1 Tablet, you can transfer files back and forth from the tablet and any other compatible device.  Personally, I think it’s a great feature to be able to transfer files to your tablet.  Especially music and video files.  This will allow you to watch movies and listen to music even when you are not connected to a WiFi network.  That’s a huge plus since there are other tablets that require you to upload to a cloud service before allowing them to be transferred to the tablet.  It’s just a pain to do that so being able to transfer files via Micro SD card or the Micro USB cable is a huge.  Another plus for the Micro USB port is that it does work as a charging port.  If for whatever reason you end up losing your AC adapter, you can rely on your trusty Micro USB cable to charge up the Dragon Touch A1 Tablet.  The only negative side effect of charging the tablet is that there is no indicator light stating that it’s charging.  So I had to press the power button more than a few times to be assured that the Dragon Touch was, in fact, charging. Now some of the shortcomings… the big one, for me anyways, are the low resolution cameras.  The front facing camera is a measly 0.3 MP camera and the rear camera has a low 2 MP resolution.  Some of the first camera phones sported at least a 2 MP resolution camera so it’s a bit surprising that the front facing camera is only 0.3 MP.  Because the resolution on the camera is so low, don’t expect to get any good quality shots with this Dragon Touch A1 Tablet.  Mind you, having a camera on your tablet is a luxury and not a necessity, but not having a good quality camera is quite a bummer.  Especially if you wanted to Skype or do any kind of streaming or video conferencing.  The quality of your video is simply not up to par with some of the other tablets on the market.  Pictures and videos can easily be shared from the tablet to social media but I doubt you’ll be doing it much since the pictures are of low quality.

The other shortcoming is the screen resolution.  For a 10.1 inch tablet, you would expect that the resolution on the display would be more than 1024 x 600.  At the very least, a larger screen should have the power and capacity to display video in true HD but because the Dragon Touch A1 tablet has a resolution of only 1024 x 600, this tablet does not.  By sacrificing HD resolution, games, apps, web browsing, and video streams all run fairly smoothly and with practically no load times but if you’re one of those that just has to have HD quality videos, you won’t find it in the Dragon Touch A1 tablet. So where do I think this tablet falls?  I think it’s a great starter tablet.  It has everything that you need to be able to browse the web, download the latest games from the Google Play store, stream videos, play music, and much, much more.  But if you’re looking for a powerhouse of a machine with a high resolution display and camera, this is not for you.  Considering that the tablet has a low price point, I would strongly recommend this tablet for the young ones or the elderly.  The screen is large enough for worn eyes to see but the tablet is not overwhelming.  Young ones will love the fact that their have a big screen to play their favorite games while having access to the internet and being able to interact through social media.  And because young ones love taking pictures, they will not mind the low resolution of the cameras.  Though Tablet Express has built a solid device with the Dragon Touch A1 Dual Core 10.1″ Tablet, there is much left to be desired. Dragon Blogger Note: Consider that the Dragon Touch A1 is a budget Android tablet for consumers and has a price of $89.99 on Amazon right now, but if you want a higher resolution tablet you can look at the Dragon Touch R97x which we did a review of recently as well and it has a 2048×1536 resolution.