With my main blog ramping up heavily toward the last two months of 2010 and the PageRank increase to 4 in December I was able to reap some extra earnings in January that helped push me to the highest one month profits in over 17 months on Dragonblogger.com.  Combine this with some WordPress consulting which isn’t really blog income (but I wouldn’t be doing WordPress consulting if it wasn’t for my blog) and Google AdSense providing the highest 1 month earnings ever, my blogging related activites were able to bring in a gross income of $484.05 for January 2011.  This time however I decided to expand my spreadsheet and report on expenses and true profit margins instead of just raw earnings to show how much money was kept in my pocket.

For the first time in the past few months I am paying writers as I now have writers on staff and if interested you can become a paid blogger for DragonBlogger.com by joining the writing staff where you can earn for articles plus make bonuses for specific assignments.  This earning system helps allow me to provide a higher number of quality articles and attract contributors who want to help grow the site so their own earnings can increase with it but is also a blogging expense that I should report on and include going forward in my earning updates. 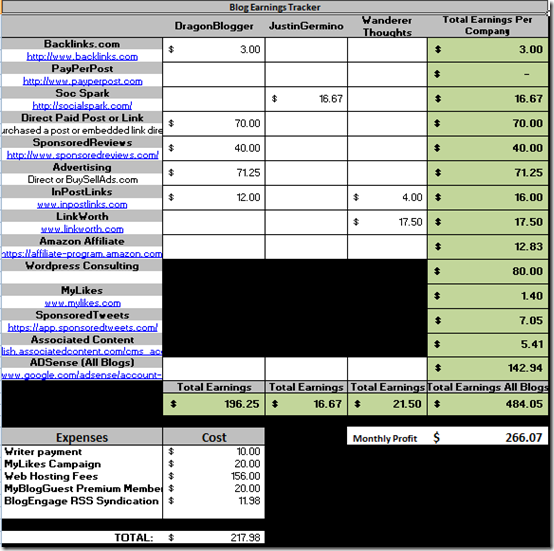 So in my earnings for January 2011, AdSense was my largest income producer.  It is no coincidence that I just put in Google DFP back on December 14th and one month later my AdSense earnings are 30% higher than the previous month.  I will do another article about this specifically but I believe Google Doubleclick for Publishers helped increase the CPC earnings from my AdSense.

I also sold a fair amount of reviews, featured links and banners in January and this is directly related to my PageRank increase as more advertisers want to take advantage of a PR4 over my former PR2 blog.  Twitter earnings are still a little anemic with just over $8.00 and most of it being from SponsoredTweets which is still my favorite network for monetizing your Twitter account. 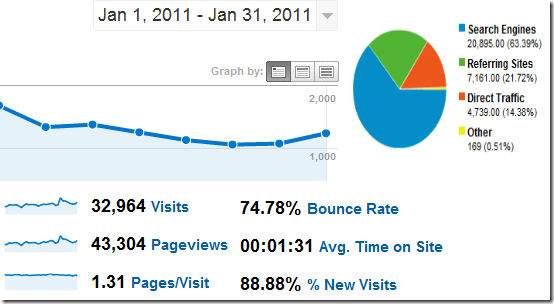 Overall the month was very encouraging and the analytics are there to back it up!  DragonBlogger.com reached the highest single month traffic in terms of Unique Visits and Pageviews ever with over 32k Unique Visits and over 43k Pageviews for January 2011.  This directly affected my increased AdSense earnings and is hopefully a growing trend.