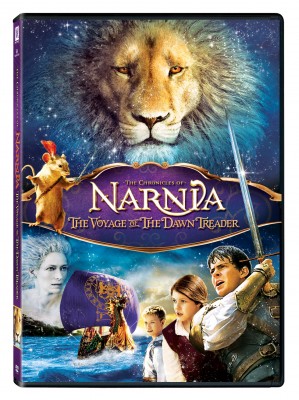 Two precocious siblings – Lucy and Edmund are back again to show us a world full with imagination and wonder, to take us all on a ride with King Caspian aboard the Dawn Treader to sail the vast oceans, to battle evil forces again–with visually stunning special effects that bring the sprawling landscapes to life—just in time for Easter!

Lucy (Henley) and Edmund (Heynes) Pevensie are enduring their stay  at a relative’s home in the country with their irritating cousin Eustace (Poulter), who is quarreling about being annoyed with his cousins taking up the extra space in “his” house. When a completely unexpected thing happens–they get swallowed into a painting and transported back to Narnia.
This time, their journey is not in the land of Narnia, but aboard the ship The Dawn Treader, on a quest to rescue the noble lords who went missing while fighting an unknown evil on another mysterious island. To sum it all up, this adventure has a different appeal than the previous two films, which were produced by Walt Disney–then dropped–to be picked up by Fox with unfortunate, sub-par results. Being an extreme fan of the Narnia books and the previous two films, I felt at a bit of a loss for this one. It felt cut short, somehow, in comparison to the book. Not that a film will contain every aspect of the book series–but you will certainly notice the attempts by the producers to make it up by using

overpoweringly effective special effects, and beautiful, mythical creatures–while beautiful and enamoring to watch–just does not do enough for me, when a film lacks a good foundation–story and plot.

If you are familiar with the C. S. Lewis Narnia series there was a build upon the unique characters you see in the film. The first of whom who stood out the most was Poulter’s character, Eustace. Extremely annoying and unlikeable–who wound up in the end being the hero of sorts in this film. The nonhuman characters, notably Reepicheep the Mouse (voiced by Simon Pegg) have more of a central role

in the film. Reepicheep and Eustace in the beginning of the film did not get along very well, but during the quest adventures, find a common bond with each other. Eustace is turned into an equally annoying and bitter dragon after he greedily pilfers cursed dragon’s treasure on one of the islands during a quest, but Eustace’s stint as a dragon seemingly “humanized” him and then predictably, after a good chat by the fire, he and Reepicheep become the best of friends. I felt that the character Reepicheep was restrained somewhat as a leading character in the film not due to his size, but there is only so much that CGI can do to allow for more his outside of the book character development and versatility. I am not taking anything away from the brilliant special effects–truly, there is only so much for CG performance that you can fit into 2 hours and 13 minutes of run-time.

There were times when the film became just too congested–trying to fill it with fairy-tale creatures and dizzying battles–where Jadis, the White Witch (Swinton) makes a cameo appearance during the film’s most intense battles with an over powering tapeworm-esq type-thing. When the fairytale land of Narnia is a jam–Aslan the Lion, steps in and saves the land and hints that we will be seeing him (and the land of Narnia) again.

Overall, the film is enjoyable. Especially for younger audiences. If you were a fan of the previous Narnia films–you still may find some enjoyment out of it.

There are a total of 7 books in the Chronicles of Narnia book series, and we are down by three. Do the math.

The Chronicles of Narnia: The Voyage of The Dawn Treader DVD Features:

The Chronicles of Narnia: The Voyage of the Dawn Treader is available now on DVD and is rated PG for fight scenes. But really is nothing for parents to be too concerned about.