This is not a sponsored post in any way, I am an actual subscriber to e-Rewards.com and have been using their service for over a year now. e-Rewards.com is a site that allows you to take surveys and you gain an average of $2 – $9 per completed survey, these virtual dollars are credited to your account and can be used to purchase all sorts of items like:

I wish you could earn VISA or Mastercard Gift Cards or maybe gift cards to BestBuy, Walmart or other retailers, but they still have quite a few good deals. I have cashed in about four magazine subscriptions for Popular Science, Entrepreneur, PC World and Food & Wine are the ones I cashed in my rewards and received 1 year subscriptions to.

You can get 1 year magazine subscriptions in as little as two or three surveys, you only get a few surveys per week and the surveys take between 15 and 30 minutes on average. Although I have had a few surveys to watch a full 1/2 pilot of a TV series and comment on the show. These are legitimate surveys, you will find yourself doing surveys from major companies and you get small bonus rewards for updating and filling out profile and interest information after completing the surveys.

Though you can’t get cash or gift cards, eRewards.com lets you get some luxuries for taking some surveys and the payment equates to about $5-10 dollars per hour if you consider the time spent from each survey for the reward. I can do about four surveys and get 2 free Blockbuster used DVD’s, these make good gifts for the family and all it cost me was some time to do surveys for example.

The thing about e-Rewards.com is they are an invitation only program, you can’t just go to the site and sign up. I received my invitation because I am a Blockbuster Total Access customer and received an email invitation to e-Rewards from them. I can’t recommend how you sign up, just that if you get an invitation I recommend you give it a try and sign up.

Here is an account snapshot to show you I actually use the service: 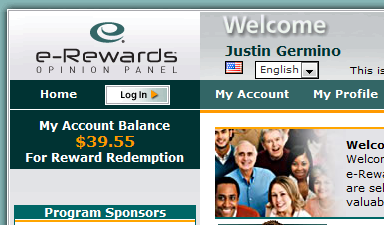