I have made the decision to remove the Twittley submit button from all of my blogs after its usefulness has rapidly decayed over the past few months.  I was getting less than two retweets from twittley per week and the articles lately on Twittley homepage appear really spammy and the system is being abused.  One site completely dominated the Twittley home page with its articles which is clearly an abuse of the Twittley system. 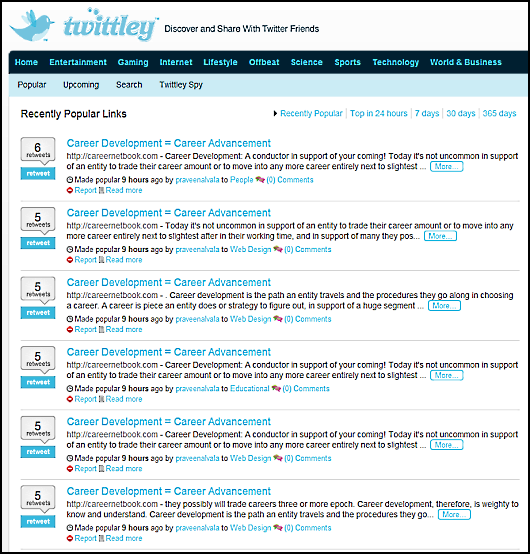 It is a shame because I really liked Twittley and my articles reached the homepage more often than they do on Tweetmeme (which is practically never). So I hope the system can regain some popularity and work to reduce its spam problem.

Meanwhile, my highest recommended methods for blog promotion include BlogEngage (Though I am finding the lack of new users to be concerning, I enjoy networking the BlogEngage folks but am seeing a trend where the same articles are all being voted to the same # of votes by the same users.) This is like a players club and your article only really gets noticed by other people using BlogEngage, so the reach is shrinking rapidly.

This is one of the main reasons why I am glad my blog gets over 70% of its traffic from Google Search engines, you can ride the waves when direct visits and referrals take dips as services become less useful. Despite my twitter following I only get about 200 visits per month on Twitter to this site, which is very low considering my almost 4000 followers. Maybe I don’t promote my articles enough on Twitter I really just rely on my feedburner feed to tweet my articles and I occasionally retweet them or advertise them but not too often, I just don’t like spamming the same people over and over with the same articles.