Roku has a Channel Store with dozens of channels but you will still find that many websites and channels are missing, a prime example is that there is no official “YouTube” channel in the Roku channel store.  This is where various “private channels” come in which can be created by developers who write them.  I recently scoured the web to find the top private channels to add to my Roku XDS device which I enjoy immensely, here is my experience with the Roku XDS and some private channels for you to enter in your device for additional features.

First, Roku XDS and XDS 2 are the most expensive Roku model at the time.  I chose the XDS because it has dual band Wi-Fi for more stable and reliable wireless connection as well as it is the only Roku model that supports the component video input which I needed for an older TV.  I also am leveraging the optical audio and the USB slot for playing movies and video right off of a USB drive. 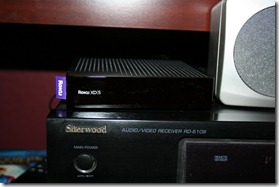 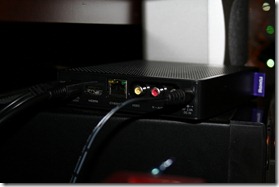 Above is how I have the Roku XDS box setup in my house, it is above my receiver right next to my center channel speaker.  The wireless remote works well but sometimes you can’t tell if the thing is on because the power light is a very dim purple.

One problem people reported with the Roku XDS over wireless is the low quality streaming from Netflix, first you need to realize that the Roku will by default choose a lower quality stream as it “tests” the broadband connection.  After letting it play for about 10-15 minutes and then exiting the video and loading it again you will find that it will always play at the highest video quality provided the wireless network is stable.  People have not really reported this problem when using the Roku wired, but wireless it can be a bit touchy.  I am using a Linksys WRT54G router and had no network issues setting it up to my WPA2 encrypted wireless network at all.

I will say that Netflix played just fine, though I was surprised it loaded a little faster on my Nintendo Wii than on the Roku in a few attempts.  I also have so many computers hooked up and using Internet at the same time I was pleasantly surprised to see a computer in my house can stream a movie from Netflix at the same time the Roku player can stream a movie from Netflix and there was no quality loss or interruption though the movie took a little longer to queue.

The Roku XDS is ideal for people who want to watch TV or Movies from their big screen TV but don’t want the hassle of having to plug and unplug their notebook into the television or who don’t have a dedicated media center PC.  At $99 dollars the Roku XDS is much cheaper than a dedicated PC for your living room TV and there is quite a lot of content you can watch in the various channels you can subscribe to.  It is recommended you either have a Netflix or Hulu + subscription to make the most out of your Roku box as without one of these two subscriptions your online options are limited to what you can find on the handful of free channels, though there are lots of podcast channels and with the private YouTube channel you can watch anything on there.

Speaking of Netflix, I can’t say enough on how much I like Netflix and my only gripe is the 30 day delay on new movies and the fact that online streaming movies are never the most recent releases,  I am hoping that better deals and contracts between Netflix and movie studio’s will eventually release movies to online streaming within a few weeks of them coming out on DVD.  I would even support advertisements in the form of commercials before and after the content if it meant there were more new releases available.

Below are the list of Roku Private Channels I have found most useful and recommend to Roku users.

This is probably one of the best Channels and allows the Roku to partially replace your local TV and some cable television stations.  The POD TV channel which I found out about by thenowhereman provides content from providers like NBC, ABC, FOX, CBS, HGTV and the Food Network.  Enter channel code “H9DWC” to get the POD TV channel and this is one must have channel.

For those who have to see what is for sale on Woot!, this channel is a quick way to keep tabs on the site.  Enter channel “BPPIM” to access Woot! from your Roku box.

Having Ustream.tv for your Roku is a good way to watch concerts and other features online, this is one channel for music folks as well as others who watch live streaming content.  Enter code “IN4DN” to add the private Ustream Roku channel.

So the Roku XDS has a USB connector, but you need to install the private USB Channel to be able to watch video content on your Roku box.  Enter code “KGULU” to add the USB Channel to your Roku device, note there are limited video formats supported at this time.  These are the following formats supported: MP4 video, MP3 or AAC audio, and PNG or JPG photos, note use a separate folder for your content, mp3’s in separate folder from mp4’s…etc.

My wife and I like having CNN on practically all day long and this channel is ideal for keeping track of real time news, enter “RBFA1” to have the CNN news channel added.  This is not the same thing as the Roku Newscaster channel which you can add from the Channel Store.

To add CNN international just use code “CNNI” in adding a private channel.

This is a site with tons of free comedic content and is one worth having on your Roku device if you like watching comedy vids, enter code “IU1VY” to add the Funnie or Die Channel to your Roku device.

There is a Twitter Channel for your Roku device but I don’t recommend it, if you follow more than 50 people you won’t be able to keep up with the conversations and the Roku remote doesn’t let you type fast enough even with 140 character limit to have effective conversation.  Still, if you want to try it enter “V8MRS” for the Private Twitter Roku Channel.

For those who are into Japanese Anime, the Crunchroll site has a channel for Roku and you can enter “anime” as the channel to add Crunchyroll to your Roku device.  This is a free channel with all free anime content.

Video’s from Engadget, I Can Haz Cheezburger Fail Blog and more can be found on “VIDDLER” .  This is a free channel with a ton of online content.

If you want live streaming webcasts you can find thousands on Justin.tv which has a private channel for now, just enter “JUSTINTV” as the channel to add it to your Roku device.  This is a free channel with all free live web streaming content. Note: Justin.TV is probably working on a Channel for the official store, it was a highly requested feature.

Search and listen to all podcasts on iTunes with the iTunes Roku Private Channel, just enter code “ITPC” into your Roku control panel as a private channel to start browing iTunes podcasts.

The Onion News network delivers all the irony and sadistic humor you could want with The Onion private Roku Channel, just enter “ONN” into your Roku Add Private Channel section.

For those who want to watch Al Jazeera TV in English, just add private channel “ALJZ” to your Roku Private Channel section.

The Roku device is adding new channels all the time and one of the main reasons why I chose the Roku was because I wanted my living room television to be strictly used for watching media content.  I didn’t want to have a Google TV device that can visit any website, do Twitter, Facebook or anything else that would distract me from simply watching movies, TV shows and other video content when I wanted to.  The Roku is also priced competitively and has more free content than Apple TV available to it.  I definitely recommend the Roku XDS for readers who want an Internet TV streaming solution and I recommend the XDS for wireless for the future support of 1080p (it supports it now, but many channels do not yet) as well as the dual band wireless connection.

Roku Still Not Having What You Need?

I recently got a Veebeam which allows you to wirelessly stream video from your laptop or home PC to your HDTV. This plugs in to your HDMI or Composite video and allows you to stream Free Hulu, Megavideo or any other website movie service right to your HDTV. With Veebeam there are no limitations, no channels but it does have the inconvenience of you having to find and queue your movie on your laptop or PC so it can stream to your living room TV. It works very well and I highly recommend the Veebeam 1080p if you don’t want to buy Netflix, Hulu+ and want to leverage only the free movie streaming services online and beam them to your HDTV. The only caveat is you need a fairly powerful PC or laptop at least dual core 2.2 ghz if you want someone to do any sort of multitasking on the PC at the same time.