Ted Murphy announced today this morning a SponsoredTweets FireFox plug-in that will display a users “list price” when you visit their twitter profile if they are listed in the SponsoredTweets system.

This means with this plug-in installed, when you visit somebody’s user profile (as I did with twitter.com/chefscookbook in this example)

You will see a new gold link that says Hire me for $X with their listed price on SponsoredTweets. 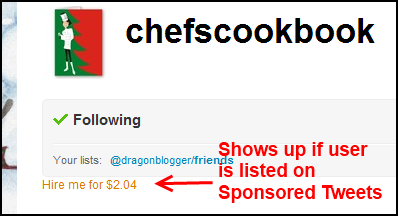 So when the user clicks on that highlighted gold link, they will be taken to the users SponsoredTweets Profile page and the advertiser can directly hire the user to promote a product or service for them. 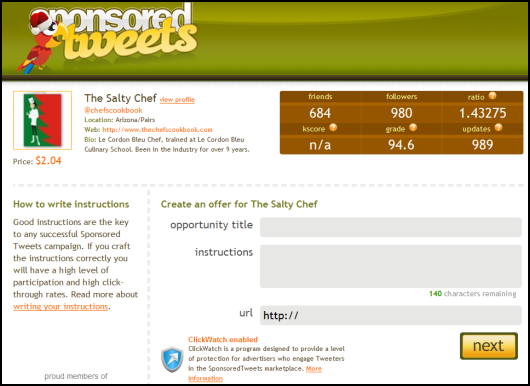 The tool is useful provided that word gets out and advertisers download and install it, it makes it easier to hire direct twitter users from their twitter profile screen instead of trying to find them in the SponsoredTweets program. Though I noticed the plug-in was a little rocky and if I refresh my browser page or move between twitter profiles it sometimes can fail to even display the Hire Me link even if the profile is listed in the SponsoredTweets system.

It is a step in the right direction, I would further enhance it to perhaps show a users CPC ratio to further entice advertisers, showing them that if they hire this person for $8, the person has an average CPC of .23 which means they will be paying an estimated 23 cents per click. Hiring somebody for $4 and having a CPC of $1.00 is not nearly as good as hiring someone for $4 and them having a CPC of .25 which means you will be getting 4x the number of clicks for the same amount of money.

So the plug-in needs some additional stability, reliability but is a nice feature. Now how to convince advertisers to start using it, and is it better to use the plug-in and find them on twitter rather than going through SponsoredTweets itself is another thing.

Also note, more people are starting to use twitter management software and websites like HootSuite or TweetDeck or even TwitterCounter, but if you click on users profile for these, they will show a customized profile page of the user, and this Firefox plug-in only works for twitter.com direct profiles.