Universal communication comes closer with Gmail now offering the “Translate” button directly integrated into Gmail.  Going forward if you receive an email in any language other than the one set by your computer preferences you will get the ability to translate that email into your language.

Google Translate uses one of the most complex methods of translation comparing text to not only dictionary comparisons but millions of documents to make sure the translated sentence structure is in proper format.  I have used it myself dozens of times to check some words/phrases that I see on Twitter/Facebook. 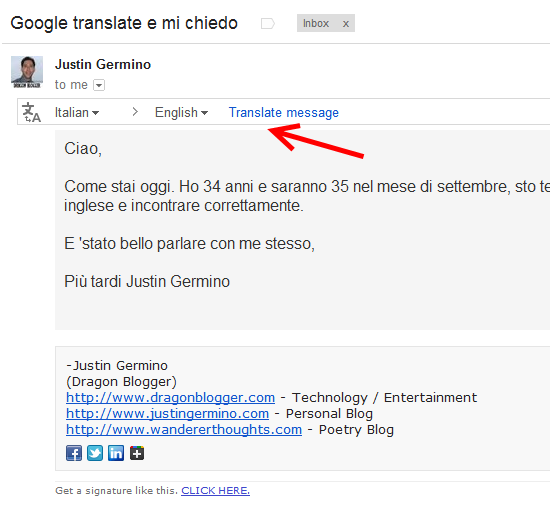 It worked pretty well when I tested it though I imagine it lost some translation when I translated an email I wrote to myself from English to Italian, then send that email and converted it back to English. 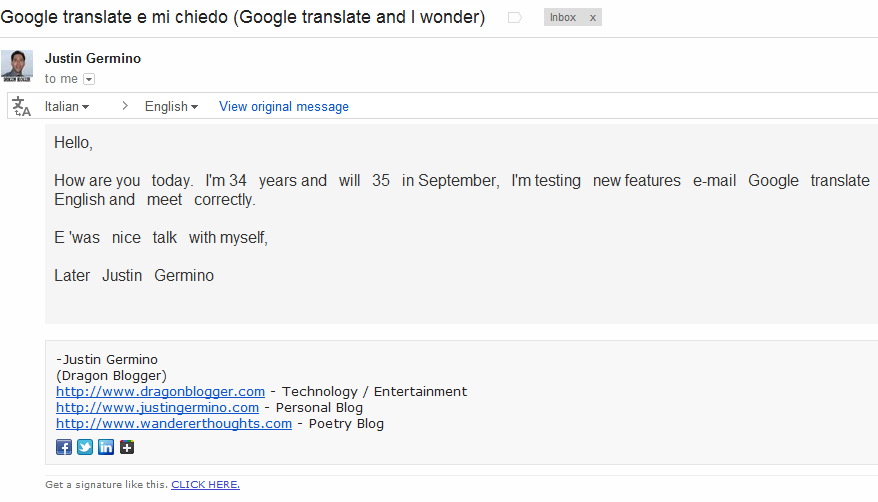 Other than missing only a few words and spacing, the entire gist of the email was there word for word.  This basically read exactly what I sent in Italian though it missed a little, I could clearly understand it enough to know what it was about.

Google Translate makes it easier to type email communications with friends and peers in other countries and let the Google system handle the automatic translation.  I am still waiting for Social Media to offer these capabilities.

I still have a large enough Twitter/Facebook network that I see people tweeting/wall posting in about 6-7 other languages and if I am interested I still have to manually cut/paste into Google translate.

Facebook or Twitter should auto translate the message so that at least you only see converted tweets/messages (a little note saying (translated / see original message) should appear in case you want to see the original language, or a translate button in the message itself would be ideal.

Who thinks Facebook/Twitter should implement translation features as well?