Having switched from Firefox to Chrome as my primary browser last week I have been more productive due to Google Chrome performance being outstanding. However one lingering problem occured in that when I tried to check my own blog feeds by hitting https://www.dragonblogger.com/feed for example there is a Google Chrome RSS issue where it instead will spit out raw XML data instead of properly displaying the RSS feed like FireFox, Internet Explorer or Opera. You don’t have this problem when going to a Feedburner feed and I saw it primarily with WordPress blog feeds.

This is what the output looks like if you go to one of my wordpress blog feed URL’s directly with Google Chrome: 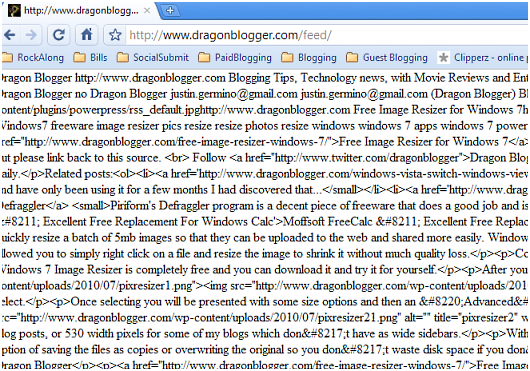 This has lead me to do some querying and I came across one of the most important extensions for Google Chrome is the RSS Subscription Extension which allows Google Chrome to render and display your WordPress blog or other RSS feed inside the browser properly.

The RSS Extension for Chrome still doesn’t allow you to manually hit the dragonblogger.com/feed/ URL but instead when you are on any main page in a blog site now that has a feed, you will see an RSS icon at the top right of the URL bar. Select this icon and it will properly render and display any of the RSS feeds offered by that website right in the Google Chrome browser.

Results of RSS Feed with the Chrome RSS Feed Extension: 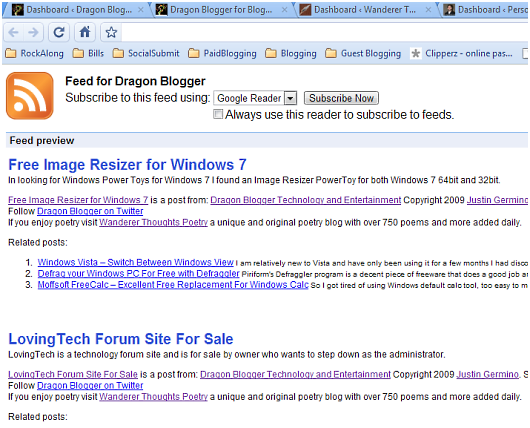 If you need to read RSS Feeds in Google Chrome and check your feeds often, the RSS Feed Chrome extension is extremely useful and highly recommended. This Chrome Extension is the best one that I have found to fix RSS issues in the Chrome browser.