If there was any single brand perfectly positioned to make the most of the recent “Raid Area 51” meme, it had to be Alienware. PC-maker Dell’s sub-brand for gamers has been around for well over two decades now. 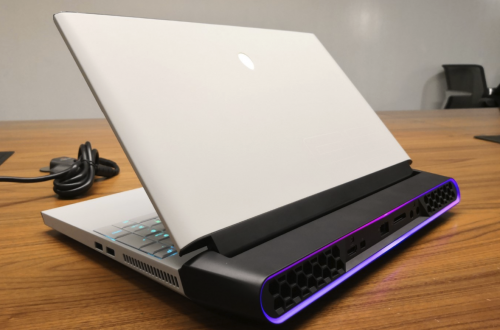 This is a machine that says, notice me

And among their X-Files and Sci-fi inspired laptop and desktop series, they already had one named after the supposed secret facility in Nevada housing alien bodies. So with the raid Area 51 becoming a reality and all that, 2019 seemed like the perfect time to revive the series, this time in a more (relatively speaking) portable format.

So how does it hold up in real-world usage? Check out this review to find out.

Gaming laptops have slowly but surely evolved over the last few years to a point where they are no longer these heavy suitcase-like behemoths any more. With smaller processors and better heat dissipation technologies, gaming laptops have only gotten thinner over time.

At 8.54lbs, this particular Alienware is definitely part of that trend, especially since it is intended to be a desktop replacement. In the weight department, it is lighter than comparable rigs from MSI, Aorus, and Origin PC.

To start with the basics, Area 51m is a new gaming laptop from Alienware. But it is not the first evert device to carry that name. There have been several Area 51 laptops and desktops in the past, with the very first one launched well over 20 years ago.

With this new range, Alienware is going into uncharted waters. Dell has discontinued its Alienware 17 series, which was the backbone of the brand’s catalog for all these years. This new laptop is a fresh new start for Alienware, albeit at an eye-watering price point of $4,499 for the top of the line version.

Unless you are already rich or have recently won a pile of cash at Vegas playing slots, this laptop is probably out of your reach!

By Alienware’s usual standards of flashy RGB lighting, the Area-51m looks downright mature and sober. It has a sleek black design, with silky smooth finishes on the surfaces. Called the Dark Side of the Moon, the black surface feels resistant to fingerprints and has a pleasing tactile feel.

You still get the glowing Alienware logo, along with some customizable LEDs all over the place, including the power button, and individual keys on the keyboard. But the best of the lot can be found at the back of the laptop, surrounding the vents. With a cool honeycomb design, they manage to grab your attention. There is also a white version of this laptop called Lunar Light.

Dell has left no stone unturned as far as the internals of Area 51m is concerned. They have thrown everything including the kitchen sink at this laptop. Instead of the 45W mobile versions of the Coffee Lake CPUs from Intel, Alienware has opted for the full size 95W+ K series. Yes, this laptop comes with desktop CPUs.

And with the Area 51m, Dell plans to solve one of the main gripes of laptop gaming enthusiasts – the hardships involved with upgrading the rig after a year or two. The laptop carries an RTX 2080 as standard, and it is a special design. You can remove and upgrade it in the future when better GPUs are unveiled.

The top of the line Core i9-9900K and RTX 2080 combo is bolstered by the following internals:

At around 17 inches, the display is a standard size for a desktop replacement setup. It is an excellent 1080p panel with vivid colors and excellent details. And of course, for an RTX2080 laptop, we could expect nothing less than 144Hz from this display. For such a big laptop, the screen had surprisingly thin bezels, which was a very nice touch.

The panel is also quite bright at 284 nits, which is a little higher on average than the competition. Gaming on this panel is a real pleasure, with games like Borderlands 3, Battlefield V, and Monster Hunter World looking vibrant at Ultra settings.

The laptop has a pair of front-firing speakers with plenty of oomph in them. But at full volume, you may end up hearing some distortions. But Dell has provided a full audio command center filled with plenty of presets for you to tinker around with.

Given the specs, it is not surprising to see so many ports on Area 51m. They include three of USB 3.0s (Type-A), two on the right and another one on the left, along with a Thunderbolt 3 port. The headphone jack is on the left with a separate mic input, while the HDMI, DisplayPort, and Ethernet are at the back.

The lack of USB 3.1 or 3.2 is quite disappointing, considering the premium price point of this device. By the way, this laptop needs two chargers to keep the 90Wh battery from draining out. You can get a maximum of 2 hours or thereabouts of life out of a single charge of that battery.

Talking about keyboard and touchpad, there is nothing radically new here. These peripherals are retained from the old and familiar Alienware laptops. The TactX keyboard comes with a full Num Pad, and the key travel is quite good at 2.2 mm. The touchpad also is quite smooth and responsive, with no complaints there.

Overall Verdict on Price Vs Performance

Looking at it purely from a performance perspective, the Alienware Area 51m is clearly ahead of its competition. It can handle virtually all recent AAA games you throw at it at the native 1080p, with most settings maxed out.

The laptop also leads in most of the major benchmark tests, like 3D Mark Fire Strike, Ice Storm, and Geekbench. Heat management is fantastic on the laptop, with a combination of innovative design, and high voltage fans keeping the temps on the lower side.

And that brings us to the price vs value debate. Unlike some other hobbies, PC gaming is usually acknowledged as an expensive pastime. While it may not increase your chances of winning huge sums of cash (unless you are a Pro gamer, or an avid no deposit casino fan with tons of luck), it is still a very fulfilling hobby when you get your hands on a top of the line rig.

The Alienware Area 51m is every bit that kind of rig – it is the ultimate gaming rig, which is also a niche, enthusiast product aimed at gamers who have deep pockets and an insatiable yearning for the most FPS or the highest score on the benchmarks. We most certainly expect Dell to launch other affordable laptops in the same range. Area 51m is all about starting with a big bang, and they have succeeded at that.