Disclaimer: The [easyazon-link asin=”B001MAWG9A”]JuiceBar Portable Solar Charger[/easyazon-link] was provided to us by ThinkGeek.com in order to test out the product’s capabilities.  The views expressed in this review are mine and mine alone. 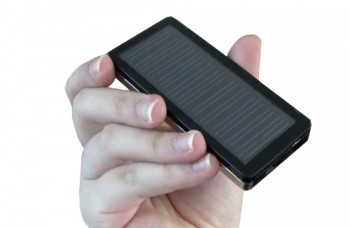 Last week we covered the amazing Microlink FR160 Solar Radio that had the great ability to keep chugging along with the littlest of charge. The multifunction device was not able to recharge a Blackberry so we set out to find something that could. Enter the [easyazon-link asin=”B001MAWG9A”]Juicebar Portable Solar Charger[/easyazon-link] – its a nifty little battery that fits in your pocket and has tons of attachments that enable you to charge practically any kind of smartphone or small electronic device. This review contains information that is essential to understand if you are interested in the JuiceBar.  I especially recommend paying close attention to the Device Charging section (there’s a reset button that is vital to know about). 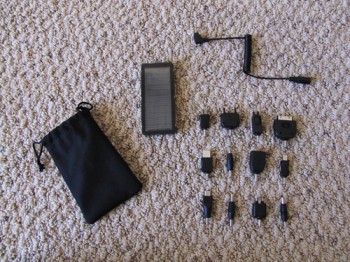 As mentioned in the introduction, I found that the JuiceBar was nearly compatible with everything.  It had a plug that allowed it to work with my mother’s LG touch screen phone, there was a special connection for Blackberry phones, and I even found the ever coveted Ipod Touch plug.  To make sure that each attachment would function with its respective device I inserted them while they were connected to the JuiceBar and ran into no issues.  Strangely, when the JuiceBar was out of charge however, I would receive error messages that stated my devices could not be charged by the JuiceBar.  If the JuiceBar has a considerable amount of charge I never see any such message.

Solar Charging
The JuiceBar mainly performed satisfactory here. It does indeed suck up the rays of the sun nicely over the span of 12-15 hours. The caveat is that within that period, the JuiceBar did not reach its maximum potential of charge. When plugging the JuiceBar into devices for them to charge – it would only increase a near dead battery to between 35-40%. The JuiceBar is able to be charged via USB however – and much quicker might I add (3-4 hours)!  To be fair, I gave the JuiceBar another run through after charging it with a USB cable connected to my computer. You can see my results in the next section – they were quite favorable.

Before I discuss my results there is a very important tidbit you need to know regarding the charger.  Each time the JuiceBar uses up its full charge it must be reset by inserting a pen or pin into the reset hole.  Many who gave the device poor reviews and claim that it died do not bother to do this.  By following the instructions and performing this action, the JuiceBar has maintained its reliability and is still going strong.  Alright onto the results of my tests!

After charging my JuiceBar via a USB connection, I hooked it up to my Blackberry Tour (click to view an expanded picture).  The phone battery only possessed 1 out of 5 bars of charge and I left a few background tasks running (Twitter, email, etc.)  I checked back after a little under an hour had passed and noticed the JuiceBar finally had used up all its charge.  To my surprise I saw that my flatlined Blackberry was brought back to life and now had 4 out of 5 bars of charge.

Once I recorded my results with the Blackberry Tour – I allowed the JuiceBar to reach full charge before trying it again.  When it finally was ready to go, I whipped out my [easyazon-link asin=”B001FA1O18″]Ipod Touch 4G[/easyazon-link] and hooked it up to the JuiceBar (click to view an expanded picture).  The Ipod possessed only 2% of its battery, the display had died, and I had background tasks like Twitter, Skype, and email running.  I left the Ipod to charge and checked back around an hour after hooking it up.  The JuiceBar had been drained of its charge and the Ipod itself had been juiced up to 87% of its battery.  Now I bet you are asking – Persian Poetess how in the world did you know the percentage if the Ipod does not show that information?  I used a very well reviewed freeware from the App Store called Battery Check Lite.

The [easyazon-link asin=”B001MAWG9A”]Juicebar Portable Solar Charger[/easyazon-link] is an incredibly handy spare battery for your small electronic devices.  As a solar charger it falls a little short in my opinion and I believe there are perhaps better alternatives out there.  If the device were only able to juice up with sunlight I would give it 3 out of 5 stars but since it performs exceptionally well via USB charging, I will up its score to 4 out of 5 stars.