What do you get if you mix time-travel with action, a movie called Looper.  This SciFi action film, due out on September 28, combines these two elements in this new film which might make you think about what would happen if you mess with the future in the past. 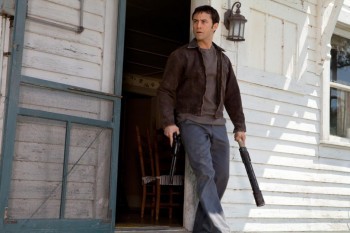 The film stars Joseph Gordon-Levitt (3rd Rock from the Sun and 10 Things I Hate about You fame) as Joseph Simmons, who is a mafia paid assassin from the year 2044.  His job, kill the people his employers send back from 2074.  Interestingly enough he is in Kansas City while his future employer is headquartered in Shanghai.  Simmons is a Looper, an assassin who gets paid to make sure that all targets sent back do not escape.  Unfortunately the company throws him a loop (pun intended) when they send his future self (played by Bruce Willis) back to close the time hole.  Future Simmons manages to escape when he incapacitates his younger self.  This does not sit well with Simmons employers and they come after him.  He is now on the run and fighting for his life, both of them are actually.

While time-travel is possible, it is illegal due to the ramifications which can happen if someone messes with the past.  Of course, this has never stopped those who go against the law and the loopers help the mob overlord, The Rainmaker, from dealing with unexplained bodies in 2074.

So that targets don’t escape, they come back hooded with their hands bound behind them.  The doomed person appears in an empty field and the looper kills them with a blunderbuss; definitely not a pretty way to go.  Simmons is so good; he has made a fortune with this job.  However, he is looking to get out of the business and move to France.  His boss, who is from the future himself, tells him China would be better. 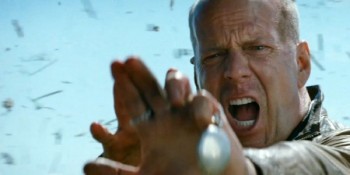 The areas which Simmons travels are seedy looking, including a club where he meets a fellow looper who gives him some extremely bad news; they are closing all the loops and forcing the loopers to kill their futures selves.  No reason is given why older Simmons come back unbound and able to see but there he is when young Simmons goes to kill his next target.

The two do meet at one point and young Simmons is bound and determined to kill his older self to get out of the trouble he is in while the older version is set to kill The Rainmaker.  His logic, the overlord is just a child now and if he dies at this point, he can’t do the terrible things he does in the future.  This includes the killing of Simmons wife by The Rainmakers own hands.

The trailer does pique your interest in how this will play out.  Just what will happen if Simmons kills himself; we have to wait and see.  Or, what happens if he escapes.