If you’ve got a serious taste for adventure and an Android phone in your hand, then you must have these epic apps in your phone or tablet.
Let’s start…

Interested in astrology or want to become an astronaut in the near future then this is the app for you. Although this app is also developed to work on the iOS platform but there is no major difference between the two versions. The app consists of everything from pictures to news and satellite tracking. Want to see how galaxies, meteors and planets look? The NASA app consists the largest collection of images i.e over 14000 images. Apart from all the astrologer stuff you can get the live streaming of NASA TV. Live streaming video from the High Definition Earth Viewing (HDEV) experiment on the ISS. And Facebook Connect and integrated Twitter client for easy sharing. There are too many features of the app to describe them all so you’ll have to get it to experience them.

Tired? Heard enough of the music? Want to close your eyes for awhile? Then Audible For Android developed by Amazon gives you free audio books and the audio books at this moment are something to be savored. Amazon is giving this out as a free app but there are in-app purchases. Plus on your download of the app Amazon is giving a free audio book to start out and a free 30 day trial of AudibleListner Gold. It has vast range of over 150,000+ audio books. It surely is one for a long road trip.

Google translate helps out when you are uni-linguist, but when you have free time you should learn these languages instead of depending on language courses and Google translate (which to be fair, isn’t all that great).
It’s more of a quiz machine than a language teaching app and scores you and your friends on the basis of learning skills and other factors etc. There’s a limit to the languages it teaches and the currently supported languages are Spanish, French, German, Portuguese, Italian and English. Not much, but it allows you to at least understand some common words and phrases and if you’re good you can even master them.
C’est gratuit ( It’s free).

With the recent release of San Andreas, I wondered to myself that could I become a director of a movie in which the world has been invaded by Aliens in large UFOs or a missile strike devastated a building. Well, my dream came true with this app’s invention. The FXGURU allows us to make a UFO appear on the top of an office or add other effects to a short movie. All you have to do is point the camera of your phone or tablet at a place and record for a few seconds and after that just edit the video and become a rookie director.

Need to send a file to a friend thousands of miles away and don’t have a scanner anywhere near you, but still got your phone with you then CAMSCANNER is the app you need immediately. The app functions in this way that you have to use your phone’s camera to scan the piece of paper you want to digital-ize. The app increases the quality of the image and makes it digitally available in your phone and you can share it with your friends and mates. Upgrade for the paid version and you also get OCR, to extract text from your scans. 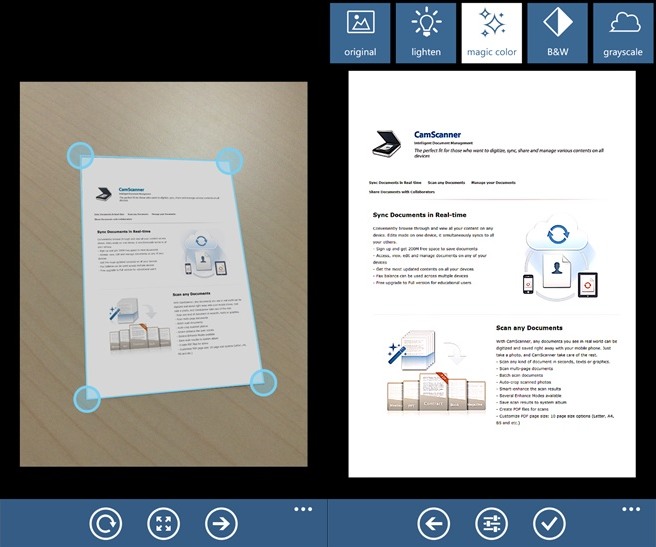 I hope you guys enjoyed this roundup and may find these apps useful and enjoyable.