Twitter now officially released its own Retweet button that you can put on your websites and Tweetmeme is standing behind it.  In fact, according to TechCrunch article Tweetmeme is shifting its business model and services to sifting information and it may eventually migrate away from the Tweetmeme retweet button.  Twitter licensed some technology from Tweetmeme for the retweet button.  This comes along with I just read in Website Magazine that Twitter is working on its own URL compression that will compress any and all URL’s going through Twitter service.  This would effectively make Bit.ly and other URL shrinking services near useless if Twitter is doing this.

See demonstration of the new Twitter Retweet button, and you can see the article on Twitter blog to install the button on your site.

DragonBlogger.com now uses the official Twitter retweet button in lieu of this news.

You just pick up your code, choose your button style and set which Twitter account gets notified on every retweet: 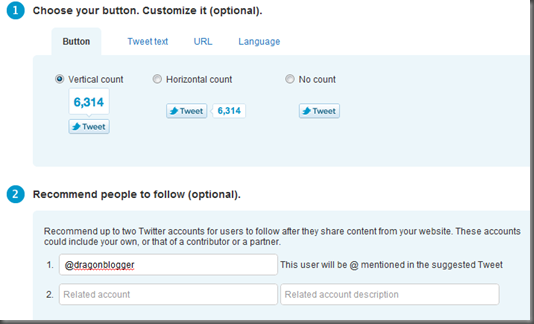 What I really like is that you can set a 2nd account to be notified on every retweet, this is a feature that Tweetmeme didn’t have by default unless you modified the code manually.

By the way, after testing I confirmed that all URL’s are shrunk with t.co shrinking service which is Twitters URL shrinking and not Bit.ly.  The bad news is that I don’t know of any services that can track analytics for t.co shrunk URL’s at this time and Bit.Ly had awesome link tracking.  So I am keeping this button on anticipating that some company will have t.co link tracking and decoding within the next week or so.

Who is switching to the new Twitter Retweet button?

I have to thank Josiah Staggs for writing an article with code example on how to solve the index.php issue that I encountered.  He listed the code to put in the index.php that would set the proper URL when you tweet.  I modified it one step further and now this code below if you put in your index.php will display the article “title” with the article URL in the tweet message:

Andy Beard makes some compelling reasons why not to use the Twitter Retweet button in your blog posts and this article contains some information I did not have at the time of writing this post.  Such as the Twitter Retweet button by default being “dofollow” and can suck pagerank from your blog posts, in addition to accuracy on link tracking.  A highly suggested read!