The Opera browser has been a longtime contender among other major desktop browsers, but often remains curiously undervalued, with usage statistics far behind Google Chrome, Mozilla FireFox, and even Microsoft Edge and Internet Explorer. On mobile platforms, however, Opera remains one of the most widely used third-party browsers available, for its excellent UI and tie-in with the desktop version. Opera runs on Chromium, the same engine powering Google Chrome and many smaller browsers, allowing it to have excellent speed and response times. It is available on Windows, Mac OS X, and Linux.

The most recent version of Opera has introduced a unique service, and one that may potentially put it above its competitors. Opera now has a completely free VPN service, including hosting. A VPN, or Virtual Private Network, which allows a user to hide his or her location from spying websites and individuals. A VPN requires an external server, and thus is typically a paid service, but Opera now has a number of completely free to use servers for this purpose. You can set your location to anywhere in the world, to get around censors, protect your identity, maintain anonymity, and ensure online security. But how strong is this service, and how does the browser itself stand up? Simply put, very well, but it may not be enough to beat out Firefox or Chrome if you’re willing to pay for a VPN service.

Opera has a smooth, modern, and very “Chrome-like” look and feel. Its UI will remind many of the more common browsers, and is fairly easy to adapt to. Although Opera is a smaller and less popular browser service than Mozilla or Google, it has an impressive lineup of plugins and design options. Many could argue that it has the best UI of any major browser, although it is much similar to the others.

Performance on Opera is, in general, excellent. In fact, Opera often beats out the more high-budget Chrome and FireFox browsers in speed tests. It is also less demanding than Google Chrome, and is thus more suitable for budget computer systems, although it still is no major contender to Microsoft Edge and FireFox when it comes to system resource use. In short, Opera is well-engineered, and is snappy and fast even on relatively low-end computer systems.

Critics have praised Opera’s VPN service heartily, and for good reason. Not only is it a completely free service, but it’s also fast. Opera’s servers are reliable and handle the vast numbers of users well, and the service as a whole often outdoes even paid VPN clients and servers.

Getting the service set up requires a bit of technical know-how, but in-depth tutorials and videos exist all over the internet. If you’re already familiar with the use of VPN services, this system should be fairly easy to use and contain few surprises (or headaches). You’re going to need to change some browser system settings, though, to get it working, you simply go into Opera settings under Privacy & Security and enable VPN. 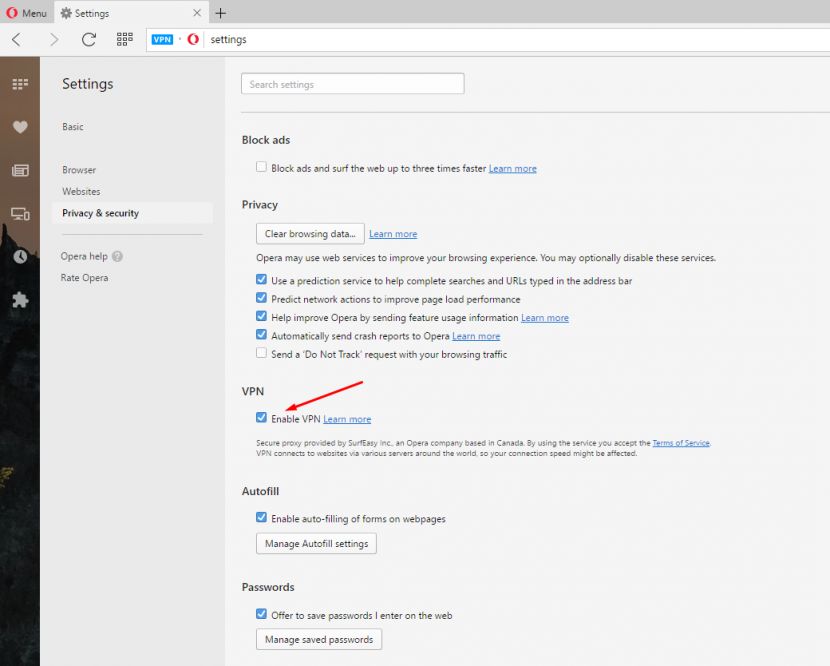 A VPN, or Virtual Private Network, is a system where a user creates a fake network inside of the real one, to maintain anonymity and security, as well as to protect the device itself. Many websites use invasive tracking technology which can be easily thwarted by a VPN, and some hostile users may be able to gain your data for use in DOS attacks or other malicious uses. Opera is generally a secure browser itself, although users should be advised that it does run on Chromium, made by Google, which is notorious for privacy issues. 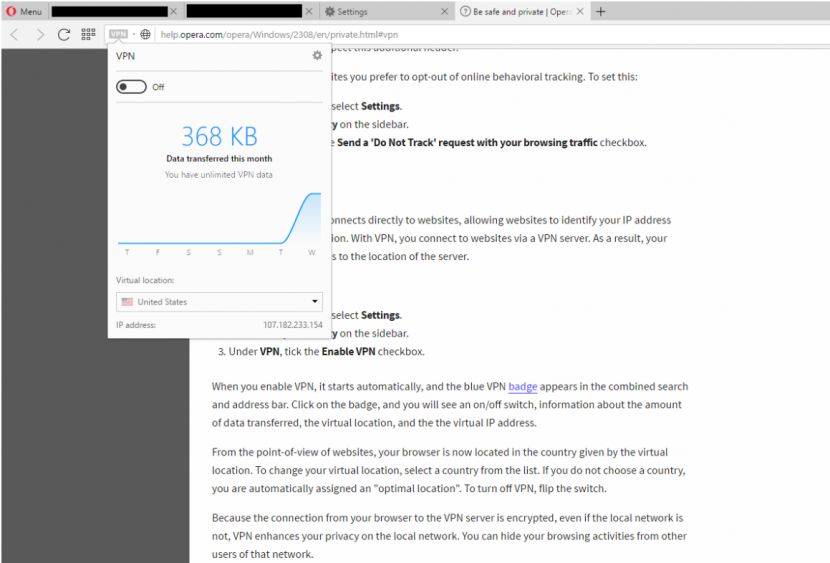 Once the VPN is enabled you click on the blue VPN button in the browser URL bar and you can choose which source location you want to come from.  Currently only Canada, United States, Germany, Netherlands or Singapore are the only VPN options. 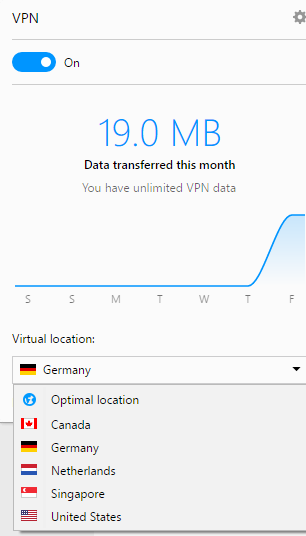 It works flawlessly though and testing it through various IP detections and even Prourls the VPN properly showed my source as coming from that country every time.

In general, Opera represents a professional and versatile browser for most major desktop platforms, and ties in exceptionally well with its mobile version. Its new and innovative free VPN system works flawlessly, and outperforms many dedicated VPN platforms on the market. However, some users may be turned off by its relatively low usage statistics and restricted customization options, as a smaller community means a smaller array of community-added functionality and modifications. However, with its new VPN service, Opera is now the most secure and safe browser and security option available for those on a budget, and its user base will likely thus expand massively in the coming weeks and months.