I originally told commenters a while ago that Social Media is something that can’t be ignored by bloggers and you have to be able to incorporate social media conversations as part of your blogging if you want to exist long term.

I also predicted and saw that adding audio/video directly to conversations like a blog or social media as the next evolution of engagement with fans, readers and customers.

uWhisp helps show you how awesome it is to simply make social media posts as audio recordings without having to do any record, upload first.  It installs as a Chrome/FireFox/IE plugin for your browser and integrates with Facebook and Twitter so that you can instantly add audio directly to your Facebook wall updates.

In addition, you can pretty much record an audio post from any site via the uWhisp sidebar, you just click the uWhisp button and are greeted with a sidebar which allows you to click record, or upload existing mp3’s. 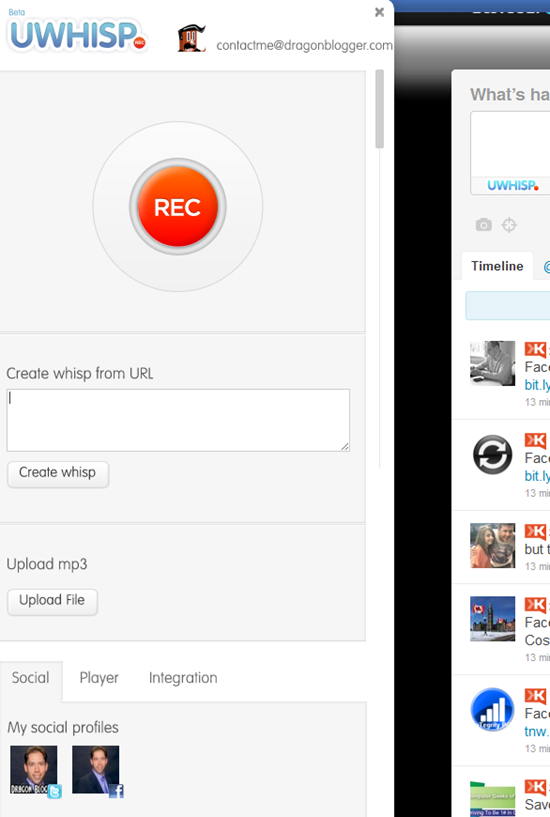 The one thing I noticed is you can’t type a custom message when uploading files but you can when recording new audio.  I did find that the feature makes it surprisingly easy and fun to simply record a message and share it with your fans.

I primarily use Hootsuite, and even though Hootsuite can’t let you send audio from the post message screen, Hootsuite does renders the uWhisp post so that it shows up as an audio play bar and you can just click play to listen. (When using the uWhisp plugin in Google Chrome)

I spoke to uWhisp and they said they have plans to work with companies like Hootsuite and Tweetdeck in the future and maybe we will see these features integrated via the Tools > App integrations feature of Hootsuite at some point.

After testing a few recordings through uWisp without posting or posting privately so only I could play back and determine the quality I was happy to see how easy it is to use.  I am however a little disappointed with the audio quality from my high quality USB mic.  I was able to tweak my mic settings and get it to sound a little better, but you could tell the audio was lower quality due to the compression that must be used.

Meanwhile, the audio bar to play uploaded audio recordings only works if others have the uWisp extension installed on their browser.

For others who don’t have uWisp installed, they are stuck having to click the link to listen.  This is expected but is a drawback as one of the huge benefits was being able to just click play in the post and listen to the recording. non-uWhisp users can only listen to about 10 seconds unless they install the uWhisp plugin which is a disappointment as it is likely to turn more users off than bring them to install the plugin.

Overall, I felt the audio was too compressed and sounded to buzzy/blurry from the 3 different microphones I tested with to sound truly professional. I mean it is akin to taking a slightly burry photo with your phone and posting it to Facebook.  It gets the message across and your friends will look at it (listen in this case) but it lacks the quality sound that you want in a professional audio recording for a blogger.

uWhisp however will keep the audio quality of an audio file you upload however, so if you record your audio and then upload it the quality will be much better, but it also defeats most of the purpose.

In doing some tests many readers said the audio was okay and not that bad, so I didn’t feel it was going to take away from getting messages across but is good for quick updates to your fans.  It is far easier, faster and simpler than taking the time to record your audio in another program, edit out background noise and then upload it to a service like SoundCloud just to share it in Facebook.

However, because users will have to install the uWhisp plugin into Chrome, Firefox, IE or whichever browser to listen to the audio it means there will not be quick adoption for the service.  It would be better if uWhisp were directly integrated with Facebook and you can install as a Facebook app rather than a browser plugin instead somehow.

uWhisp is free go ahead and try it out for yourself and add audio messages directly to your social media channels https://uwhisp.com/.