Update April 16, 2012:  As I implied in the article, I did indeed give the Sorting Hat another go.  I deleted my old account and created a new one to comply with the Pottermore Terms of Service.  The result of my sorting this time around was not the same.  If you are curious to find out scroll down to the bottom of the article.

NOTE: This article contains SPOILERS regarding the Sorting Hat quiz.  Expressed below are my personal opinions on the nature of the quiz.  Do not take this as an attack on houses – all exhibit qualities I like believe it or not!

The results are in and the Sorting Hat has made its decree for nearly 30,000 Pottermore beta accounts. The quiz behind this mysterious hat taxed my brain and caused me to do some soul searching. Questions like “Which road tempts you most?” seem deceptively simple but prove otherwise the more you marinate on the possibilities. When my screen finally displayed the congratulations message for a certain Hogwarts house…it caused me to wonder. Does the Sorting Hat truly know your HEAD and your HEART? 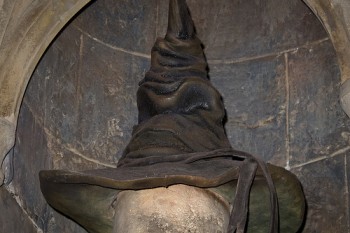 Your House vs. Your Heart

The particular house I was sorted into are the loyal, hardworking, and tenacious Hufflepuffs. The acceptance message gleefully states how honorable the standing of the house is and how it goes out of its way not to boast about it. Why should I not be content with a house that J.K. Rowling herself once was sorted into? [1]  What is there not to love about sporting the colors that have been heralded by heroes like Cedric Diggory or Nymphadora Tonks? Isn’t it a nice statement about my character that I am viewed as a valued friend – ever true to the end?

Well I’ll tell you the problem – this does not reflect my heart.  Sure I believe in maintaining honor among friends and to treat your fellow human being with compassion but this does not define me.  From the early beginnings of the [easyazon-link asin=”0545162076″]Harry Potter[/easyazon-link] series I saw my tastes, quirks, interests, etc. align with the Ravenclaws.  To possess knowledge about human nature itself, to question why things are the way they are, to constantly test my mettle in the skills I enjoy – that is who I view myself as.  Perhaps this is a vain point-of-view and self-serving because after-all I may not truly live up to the pursuits I just listed above…but it is my honest feeling about who I am as a person.

Was I able to show these inner qualities I believed I possess?  Yes and no.  Below I will outline how my Sorting Hat quiz went.  I will not provide all the possible answers but I will attempt to summarize the questions and answers I received in the next section.

The answers offered by each of my 7 questions (out of 150 total) were one part of the quiz that really satisfied me. While there was a question that more or less asked: “Are you clever, brave, ambitious, or kind?” (Hint: Question #1) – most offered a wide variety of options in which I could single out my personal preferences.

Take for example Question #3 “Which would you rather be…?” There were two options at hand that I believe collided with each other – the selection I made which was “trusted” and another available answer which was “praised.” While I am in no way implying that all Ravenclaws have massive egos (don’t we all), opportunities to show one’s wit and be admired for it does indeed sound like a desire that fits the house. This particular option could bode well with Slytherins too who often possess high aspirations and would like to receive credit for them. Though my gut told me this could potentially steer me into the claws of the raven mascot, I dug within and chose “trusted.”

Alright, I’m already showing my true Hufflepuff colors right? Wrong. Allow me to share a few more of my answers before I argue a possible defense for a ticket into Ravenclaw… 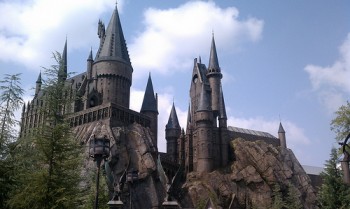 A second set of answers caused another clash of known house traits. Question #4 offers a myriad of Hogwarts subjects in which you select one as your favorite. There is an option however to joyfully state that you would like to “learn them all.” Once again I stuck to my guns and went based on the subject I am drawn to – which is “Transfiguration.” A Ravenclaw limiting their subjects of study does not exactly sound kosher does it? Whose to say that Ravenclaws naturally want to be an encyclopedia on anything and everything? This was a tough question to ponder but if we want to go based on the classic tenet of the house – they are the ones who believe in limitless knowledge: “Wit beyond measure is man’s greatest treasure.” [2]

Looks like my chances for Ravenclaw are completely dashed right? Again, I think not. Lets throw in one more question to the mix to make things even more interesting…

Each of us have beaten paths that call to us.  Pottermore does not neglect this attraction in Question #5 – in which it offers what appear to be easy going roads versus ones that are for the more daring of heart.  Naturally I avoided roads like the “dark lantern-lit alley” as it did not appeal to me and I do not possess the nerve to trek it.  There were two options however that resonated with me…those being “a wide, sunny, and grassy lane” and “an avenue of ancient buildings.”  My brain did a tug of war arguing the merits of both.  The argument in favor of the grassy lane is one of the basis for my criticisms of the quiz so I will not reveal that yet.  After hemming and hawing over the microphone as I narrated my sorting during our Pottermore audiocast – I settled for the charming sunny lane.

Enough beating around the bush – the time has come that I explain why the answers outlined above do not necessarily brand me a pleasant Puff.

Can You Hear Me Now?

When Harry told his worried son that the Sorting Hat takes your choice into account – it was sealed in the minds of the Potter fandom that the hat will at least hear out your plea[3] As you can see in the lengthy section above (my apologies, I guess it wasn’t so much a summary after-all) – none of the queries provide a chance for you to put forth your personal choice. Now I bet you’re yelling: “Persian Poetess, that is NOT true – there is such a thing as Hat Stalls silly!”

Hat Stalls are when the Sorting Hat recognizes that a student may potentially fit in two houses and grants the student the decision of which he or she would prefer (the exception being Neville Longbottom).  While Hat Stalls were rare in the books themselves, they should not be on the quiz. Even someone showing the tiniest smidgen of another house should be given the chance to voice their choice. These hidden qualities may not exclaim themselves through this quiz but there are ways that they could – with or without Hat Stalls.

Jumping back to my answers for a second – lets take a look at Question #5’s answer again. Lets say the Sorting Hat offered a subset of answers that back my reasoning as to why I thought a sunny lane is more enchanting than a street lined with ruins. If it did – perhaps I would argue: “Old monuments can be studied all around us but how often in this day and age filled with war, toil, and suffering do we get to observe something like a bright and peaceful path?” Maybe I would even say: “As important as it is to study the past we should not necessarily dwell on what was once great – at times we must use our present knowledge to capitalize on something that already is great or potentially can be great!”

There’s no telling if those are Ravenclaw answers but at least it would allow me to elaborate my preferences rather than assume what I meant by them.  They could still restrict it to the multiple choice style format – all that I am arguing that is needed is the chance to put a deeper set of variables at play – ones that at least decode why your tastes lean a certain way.

Pottermore’s Sorting Hat quiz is indeed sophisticated in its approach but slightly broken. If J.K. and her team could devise a way for both our head and heart to be heard – I would call this the essential Sorting Hat quiz. I am still very pleased with the effort presented in this beta version and I seek to be a proud Hufflepuff. When October comes perhaps I may try my hand again but regardless of house placement – it is our actions that define who we are most of all. Rowling’s own works have best proven that to us…

Update April 16, 2012:
Well folks it looks like I truly am a hybrid at heart. As I stated above, I started afresh and closed my shiny beta account with a sigh. Within the span of 20 minutes or less I took yet another seat under the brim of the ominous Sorting Hat. This time instead of showing the bright yellow bumblebee colors of the Hufflepuffs — my screen was splashed with Ravenclaw blue.

I plan to write another article regarding the Pottermore Sorting Hat addressing not the questions themselves but the amazing debate that has spanned the past several months in our hopping comments section. Astute readers have brought up some compelling points both in favor of and against the Hat. I will comb through some of the best and examine the strong rationale behind them.