I had been using MyLikes for about a year as a way to promote products on my social media accounts and earn in a pay per click type of fashion. The service has actually been pretty good originally, but the number of opps and earnings have declined a bit over the past few months for me. I decided though for the first time to try MyLikes as an advertiser and pay $20 into the system to promote an affiliate product I wanted to sell and see what kind of return on investment I could get.

First of all I decided to promote the Roku XDS box via my Amazon Affiliate, though the commission rate is only 4% from Amazon.com which equates to about $3.00 per sale, the fact that if anyone clicked on the link an Amazon.com cookie would be set in their browser and I would earn a commission from any purchase at all on Amazon.com while that cookie persisted. This made it seem like a good test and experiment and I paid $20 to MyLikes to start the campaign. To make my money go further I set my CPC rate at .15 cents per click, which is on the lower side but high enough that others would take the opp. I have seen rates as low as .08 cents CPC on some opps and wanted to stay with the recommended minimum price of .15 per click.

MyLikes does a good job of showing you a summary of your campaign as well as breaking down every person who tweeted, Facebooked, Liked…etc.  You really can see that my campaign netted about 118 clicks and used $17.80 of my $20 I vested into the campaign.  Which is exactly a CPC of .15 cents, no tricks, no surprises at all. 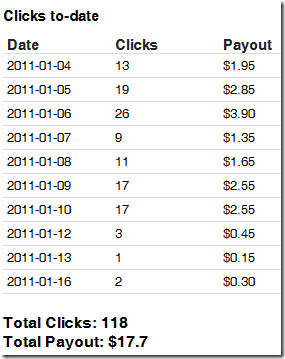 Looking at the summary of my campaign I can see that my advertisement had a pretty big audience:

Overall my advertisement reached over 1/3 of a million people on Twitter, had 69,760 Pageviews and had an average cost of .11 per tweet .05 cents per engagement.  Ultimately though the campaign yielded me with only a single sale of the Roku XDS product I was promoting which turned out to be a $3 commission so the MyLikes campaign did not provide a good ROI for this product or advertisement campaign I ran.  I do think it could be an effective way to drive traffic to an eBook or product/service you are selling with your blog as the pageviews alone could help increase your audience.