After being invited by @growmap to check out JustRetweet I decided to sign up and give it a whirl.  I often get great advice from Growmap.com on various marketing and business tips for this blog and most are worth checking out and paying attention to.

JustRetweet is a service that uses a point rewards system for promoting users to visit or share articles on their website or blog.  You set a point system for how much articles are worth and users get credits for sharing (retweeting) your article.

It is very similar in design to Retweet.it which had potential but fell into obscurity after a time.  This service is subject to the same inherent problems that Retweet.it had however and I am hesitant to recommend it at this time. 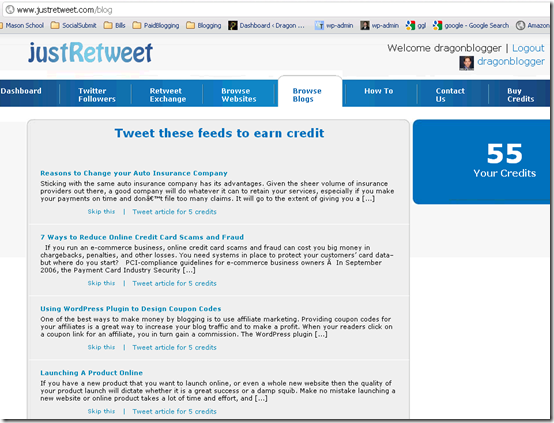 When you sign up you will be given an initial pool of credits and some bonus credits for filling out your profile.  You will also setup connections with your blog / RSS Feed and Twitter profile and assign how many points you want to give people for sharing an article or visiting your website.

The problem is that the system has no way to filter which blog posts are available to choose from, there is no categorization of your blog when you list it.

This means you have to literally weed through dozens of posts to find one that may be in similar niche and content as your own blog or profile niche.  This will get horribly worse as more people sign up and it is already bad with only a small number of blogs connected in the system now.

One of the features when listing your website is to reward people to “follow” which involves them clicking on your site and waiting 30 seconds for the validation to be successful and credits to be awarded. 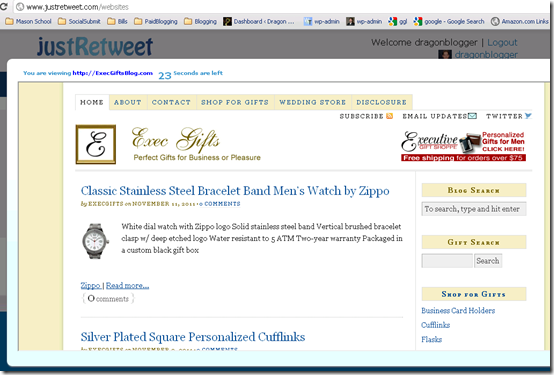 This is a horrible waste of time, and in some cases 10 seconds were wasted just waiting for the site to load.  What most users would do is click out and bore before it ever finished counting down.

You can’t really see if it is a good site until you open it up, in fact you don’t even know the site name until you click follow!  This reminds me a little of Twiends in how you pay credits for people following your Twitter profile, but at least you were getting a twitter follower, this for a single pageview just isn’t worth even 1 or 2 credits as few would sit long enough on more than 1-2 sites to get the credits. 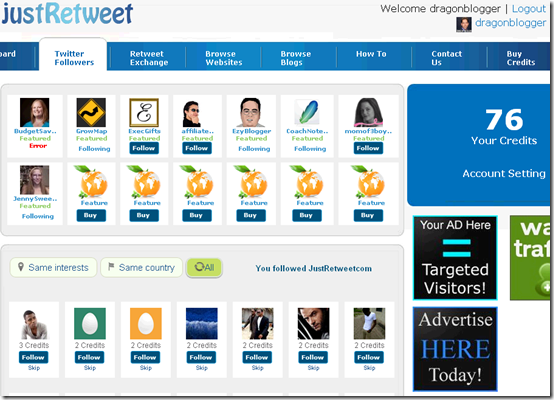 Just like Twiends, JustRetweet awards points for following users Twitter profile and also has the same limitations.  You click follow and get points, the problem is you get points even if you are already following that person on Twitter already, it doesn’t do a validation first it would appear to see if you already follow that person.  So you pay out credits for people clicking “follow” even if they were already following you, which defeats the whole purpose of investing in the system.

Twiends also has a policy that it refunds credits if people unfollow too quickly…etc and I don’t see anything on JustRetweet that at least tries to preserve your credits/refund them in the case of “fake follows” or immediate unfollows.

Lastly, anything that promotes instant follows for credit will gain poor quality followers in general and will inflate your Twitter follower count but you wont’ gain much additional interaction or social engagement.

So What is Beneficial?

Honestly, the most beneficial was the mention that Growmap did about using the system to give higher points for different types of shares.  Like rewarding for delicious bookmarking and voting up on article directory sites.  These types of sharing where you get SEO benefit by the delicious backlinks or increased reader visibility in the case of having articles voted up are where you may actually see more benefit than specifically form the Twitter follow or homepage view aspects of it.

The funny thing is the system isn’t specifically designed to do this, but you can creatively leverage it by building custom tweet’s you want promoted and reward for those promotions.

As it stands right now, I see the system catering more to those trying to get more blasts for their affiliate product sales or landing pages than for anything too meaningful.  The system will also need to have people choose categories for their blogs/retweet exchange if it has any hopes of allowing users to find meaningful content to share without wasting time browsing through dozens or hundreds of potential items to share (most of which would be simply ignored).

I will continue to occasionally test out the system and report on feature improvements, but at this time I can’t give any grand reason to recommend it.  If you are looking to build Twitter follower count Twiends and TweetAdder work but also suffer from the same “poor quality followers” aspect, though TweetAdder at least you can filter what types of people you follow hoping for the follow back.  Also for sharing content and getting retweets Triberr would seem to be more beneficial but getting access to a good tribe with high end Twitter profiles isn’t easy and starting your own and convincing people to join is just as difficult it appears.  Again though, inflating shares/retweets doesn’t necessarily lead to more traffic and having an article retweet 20-50 times by twitter accounts with 100 followers isn’t nearly as beneficial as garnering one true retweet from someone like @JohnAguiar and his massive Twitter network.