Comment moderation without interaction is a huge waste of time for me, as a part time blogger who only has about 20 hours per week I can dedicate to blogging I can’t afford to waste 3-4 hours per week just weeding through comments in moderation to mark them as spam/trash or digging through spam to find valid comments and approve them.  I don’t mind moderating valid comments and approving them, and I try to respond to every single valid comments left on articles I am the author of and expect the same from my writers for this site.

Livefyre now allows you to turn on guest commenting for your blog, this means that readers can comment without having to sign in to Livefyre.  The do not however get a backlink to their website unless they register and sign up, so there is still incentive for a reader to register and become a member to gain the additional benefits when commenting on a Livefyre blog.

I also wanted to make sure that comments were in the source code on this site and left intact for SEO value for SERP engines.  Since Google and other search engines weigh in the comments added to articles for considering in SERP placement and real time results it is imperative that the comments were not iframed or read in externally but actually displayed on the page when you click “view page source”.

Comments could be DoFollow with commenters getting some PR juice for taking the time to leave a comment was also a plus.  Another plus was if the external comment system was compatible with CommentLuv but this would not be the case with Disqus or Livefyre at this time.

However, Livefyre does have a similar link back with it’s own system which shows you where they last interacted in their URL if the user has their own WordPress blog using Livefyre.  This is similar to CommentLuv in that it shows where you were last interactive and may garner interest in visiting a previous place you commented.

Did you ever want to take a screenshot and instantly show the blog owner?  Livefyre allows you to insert a URL link from Flickr or Twitpic and instantly turn that photo into a thumbnail so you can easily show the blog owner a snapshot or image of what you are talking about.  This is a cool feature and Disqus is the only other commenting system with a feature like this.

In addition, comments left in the external system I want saved into my WordPress database so if I should remove the system later all comments would remain intact.  Though Disqus supported this as well I read on a few sites that it was sometimes unstable and I tested disabling Livefyre several times and all my comments were intact in the WordPress database when disabling it. 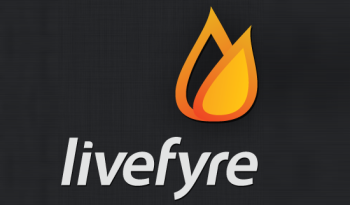 I looked at more than a dozen articles about Disqus, IntenseDebate and Livefyre which were the big 3 I had narrowed it down to.  I also then narrowed down to Disqus and Livefyre, Livefyre is the system that won out.

I experimented with commenting on other blogs using these systems and was won by the interactivity level of the Livefyre system plus the integration with social media like Twitter/Facebook directly into the commenting system.

Livefyre promotes and integrates with social media better than any other system from what I can see.  You can simply type @username and invite someone from Twitter or Facebook to directly join the conversation as well as share the comment on Twitter or Facebook allowing others to directly interact and engage without having to simply cut/paste the URL and share it the traditional way.

The email notifications was also a big plus for me, you can set the emails to notify you based on the type of comment.  If the comment is a reply you can get emailed right away, or you can choose to never get comments on posts that unless they are replies.  This also always lets you get comment emails if you are moderating a conversation. 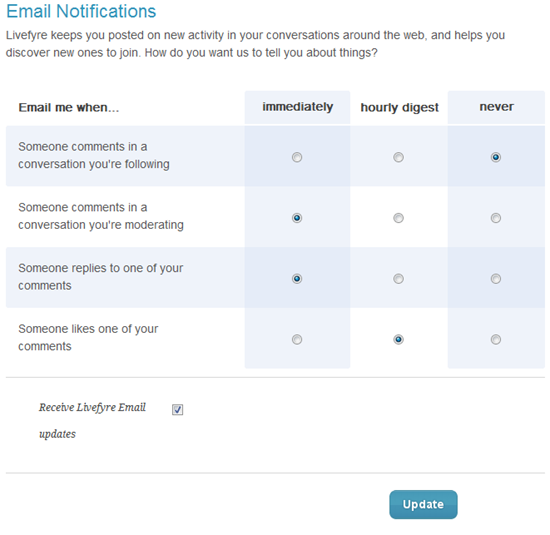 It is these factors plus my innate nature to try and experiment with new things on this site that convinced me to finally test out Livefyre and let it run for 30 days to see how it fares.  My goal is to compare with how much interaction, how many comments, how much moderation my site gets compared with my previous default WordPress commenting system with CommentLuv.

Right away I was able to realize the benefit of Livefyre when I was able to disable 7 other WordPress plugins that were not related to commenting.  These included GASP or Akismet, ReplyMe, Subscribe to Comments, Ajax Edit Comments, NOFF (NoFollow Free), KeywordLuv and CommentLuv.  This reduces strain on the WordPress blog itself to not have to load all those PHP calls for each and every post.

Note, you have to leave Simple Trackback Validation with Topsy Blocker as it would seem Trackbacks can pierce through the Livefyre and show up in your WordPress blog moderation or approved queue.  So I kept this system in place after disabling it and saw a ton of trackback spam hit my moderation queue.

Overall since switching to the Livefyre system I have not seen the commenting slow down, but I have had to do far less moderation.  There maybe a few less comments that I would approve, but it seems like it is doing well and commenting in generally is still fairly healthy.

Now, it didn’t take me more than two days to realize that there were some features missing from Livefyre that are needed quickly, especially if you are a blogger who runs multiple blogs all using the Livefyre commenting system or have a multi-author blog.  I should also point out that when I mentioned these suggestions to the Livefyre team they already mentioned they are working on solutions for all of these suggestions in one form or another though no set time for release was listed yet.

Currently, Livefyre defaults all Conversations (post comments) ownership to the blog owner, this means all my writing staff conversations show my Livefyre account as the author.  This generally isn’t a big deal as I have all my main writers also as Livefyre moderators but this means they can moderate and reply to comments on all posts and not just get notified and moderate comments on their own “authored” posts only.  This also means my writers are spammed with comments on every single post on my site and with over 1300+ articles and comments dropped on articles from 1 day to 1 year old they can get a lot of emails about comments on articles that aren’t even their own.  Sure they can update the Livefyre comment notification, but the options are hourly digest or never and they don’t want never, but hourly is still too frequent.

This is a big one and this single reason makes it hard to run a multi-author blog where you delegate comment moderation to your authors for their own posts.

Livefyre currently requires you to go to each one of your blog posts where a comment was left and leave a comment manually within each blog post.  This is highly inefficient when you can get dozens of comments all on different posts and has you constantly loading different pages, finding the comment, replying…etc.

It is far more efficient if Livefyre will let you reply to comments directly from the Livefyre Site Dashboard where you moderate comments.  You can read and reply to all your comments from a centralized location without having to sign into your WordPress blog at all.

Another option would be to allow for email reply to comments, where your reply to a comment via the email notification will sync with Livefyre and sync back to your blog as well.

The conversations screen itself where it lists all your conversations and your ability to select and change moderators or conversation author as well as close comments and nesting level is nearly useless.

WTF is Gory Pumpkin?  I couldn’t even find what post this was and on what blog? 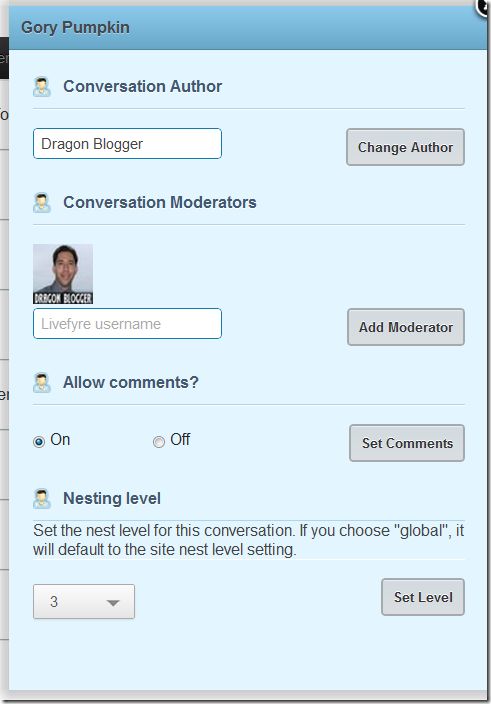 I did a search on all of my blogs and couldn’t find anything coming back with Gory Pumpkin so I have no idea at all what the hell this conversation is and which blog it is hosted on.  It shows up under my DragonBlogger.com site but none of my other moderators are listed for the post, so I just don’t know what this conversation is or how it got there.

The conversations under site needs to list the original conversation URL (post url) maybe the # of comments, ability to filter based on conversation dates…etc.  Even the ability to select and mass change comments at a time would be nice, like say making all comments 5 nested threads, or all comments for December 2010 turn off…etc.

Need’s search filters and more information for the Moderate Conversations section to be helpful to me.

So readers, be honest with me it has been a little over a week now and I want your feedback on the Livefyre system.  Most of my issues were with the moderation and administration of comments but how does it look/feel from a reader perspective?  I have definitely noticed a bit of a drop in commenting but also a 98% drop in SPAM as well.

I want to hear from you!