I have recently been more active on Triberr in seeing how it could improve the reach on Twitter as well as help showcase some other bloggers with smaller audiences to my own audience.  I am also interested in testing out the reblogging feature of Triberr but this article is about my investigation into the Triberr Global Commenting System.

However the commenting system is still in it’s infancy and lacks too many features for me to recommend other bloggers use it at this time.

Comments Add No Value to Blog from Google SERP perspective.

Triberr has to load any comments left after the page is loaded, it doesn’t appear to have the comments show up whatsoever in the html source code of the post.  As a result, Google cannot see any comments, this means anyone searching for terms, keywords that could be found by matching comments will not see them on your blog. 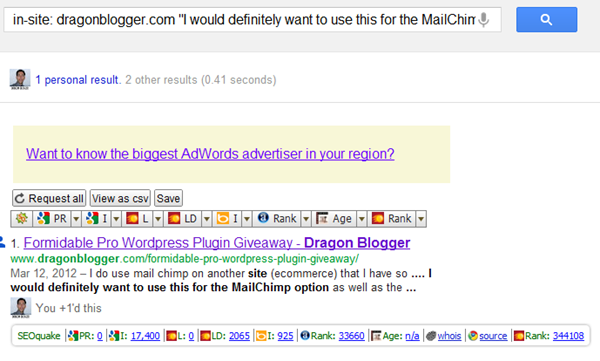 You can see I searched for a specific phrase on DragonBlogger.com “I would definitely want to use this for the MailChimp” and I found the post and phrase in my Formidable Pro Giveaway where it was in tomjamieson‘s comment.  This was a drastic example, but really comments add SEO value to your blog when they are visible in the HTML source code and by using the Triberr Global Comment system instead of WordPress commenting system or LiveFyre (which has your comments in source code) you are not allowing the commenting to increase the SEO value of your blog post.

No ability to do threaded replies or actual replies

Without the ability to support official replies, the Global Triberr commenting system doesn’t allow the possibility for readers to subscribe to only replies to their comments so that they don’t have to be forced to endure receiving email updates for every comment on the post. 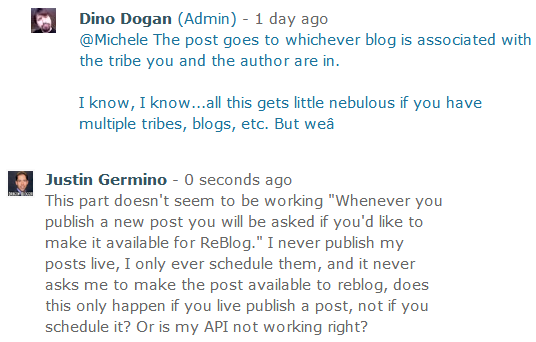 You have to use @name to make people aware you are talking to them, and there is no actual link or notification that they were actually responded to.  I have seen this happen with Dino’s larger comment articles on Triberr itself and it is an “all or nothing” subscription to the bonfire’s and some of the articles feel like bonfire’s.

Name Links to Triberr Profile Only

This one is pretty cool in the fact that I was able to find people more easily to invite them to my tribes, but from a blogger’s standpoint where they want to reward their commenters and commenters want to have a link back to their site, this could be a factor to consider.

Lack of Any Social Media Integration

The global commenting system has no ability to reach out to or connect with any social media platform, this would be a major feature since Triberr itself is build across spreading articles and expanding audience on Twitter through Tribes.  It would make sense that the commenting system should have some ability to interface with Twitter as well by maybe recognizing the @twitter ID and calling users into Triberr conversations like Livefyre can do with Facebook and Twitter, or be able to at least post that you left a comment on that article to Twitter to maybe invite other fans to check it out.

I think the Triberr Global Commenting system is unique and has potential, and I like the concept that Dino is going with reblogging in that you are basically making articles “syndicate” as columnists do in papers across the country and TV Shows do when they go into syndication.  I think a system where any comment left on any blog hosting your “syndicated article” gets set in the article is interesting, however I don’t know if this is how it should be.  One could argue that the blog owner should own the comments left on his blog and they aren’t property of the guest or reblogged article.

In the meantime the Triberr commenting system is still lacking too many features and may actually hurt the SEO value of your blog post because comments left are not in the html code and will not be factored by Google when it scans your page and returns search results.  I think this is something that should be implemented as soon as possible?