As I mentioned before, I used TRIXX 3.0, An in house utility Sapphire created for overclocking, but it can do much more than just overclock.  For those of you learning, I will just quickly breeze over it.

The way I recommend doing it is to start from the bottom, start stock, you don’t know where you’re going unless you know where you’ve been.  Please take note, this is my approach, everyone has their own approach to overclocking. 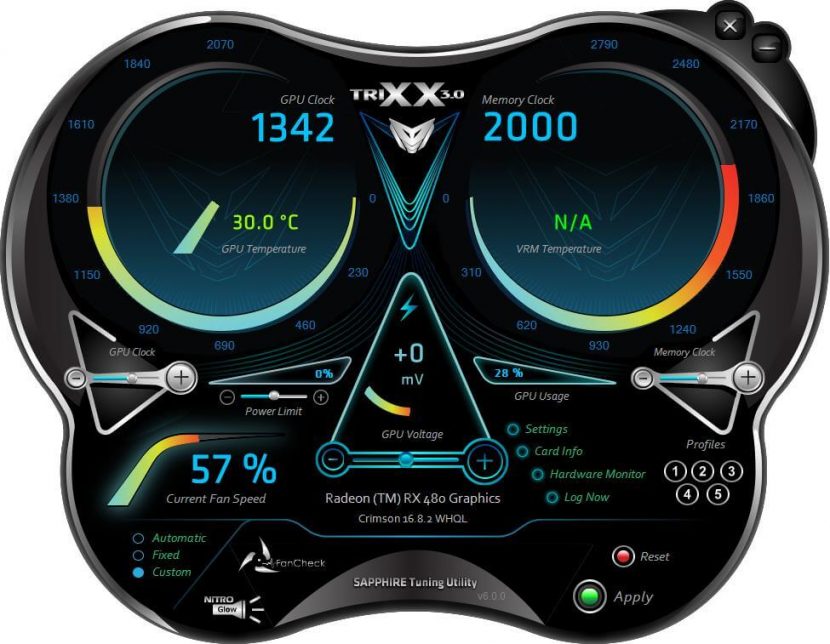 So the rule with overclocking here is the same rule overclocking anywhere, you have to keep a log of all your work and benchmark results.

To start here, raise your GPU Clock 5Mhz then click “Apply” then run a round of “3DMark” and a benchmark of one of your most graphically intense games, for me the game I use is “Metro Last Light”, it catches mostly everything wrong with an overclock. 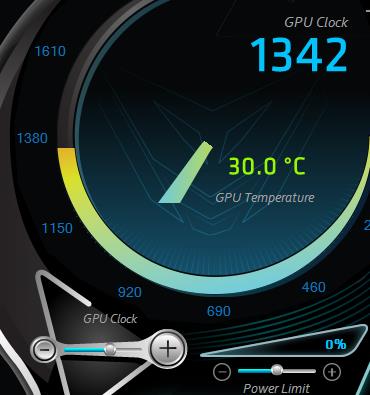 When you get the results, write it down next to the section where you wrote down the settings and then raise 5 more Mhz and repeat the process.  If during your testing the machine freezes or you notice artifacting or tearing (spots appearing on the screen, missing or stuck textures) then it’s time to add more raise the “Power Limit” bar and if that fails then also raise the GPU Voltage and test again.  Make sure all changes you make, you click “Apply” and you write it down.

Be careful with the GPU Voltage, if you raise it too much you can potentially damage the card, but on the lighter side you will eat up a lot more power needlessly. 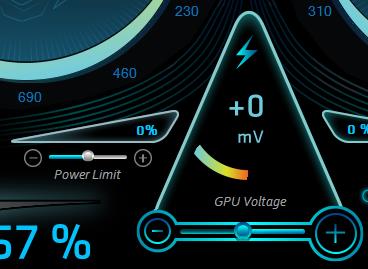 As you are raising the GPU Clock, you will also want to work on the Fan Speed.  I would recommend clicking “Custom”, which will open up the “Custom Fan Speed” section where you can raise/lower the fan bar. 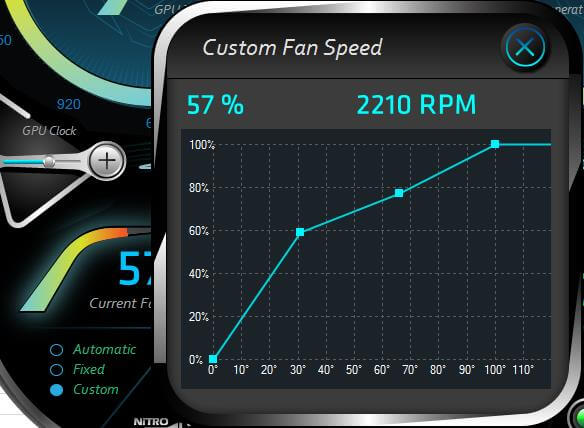 Once you have reached a stable GPU speed and achieved adequate cooling then I recommend you start working the same process on the Memory Clock.

I would recommend to save your work too, you can do this on the profiles.

You will want to use the same methods for Memory Clock that I mentioned for GPU Clock.

Here you will raise the “Memory Clock” slider

This is what I came up with, let me know what you got? 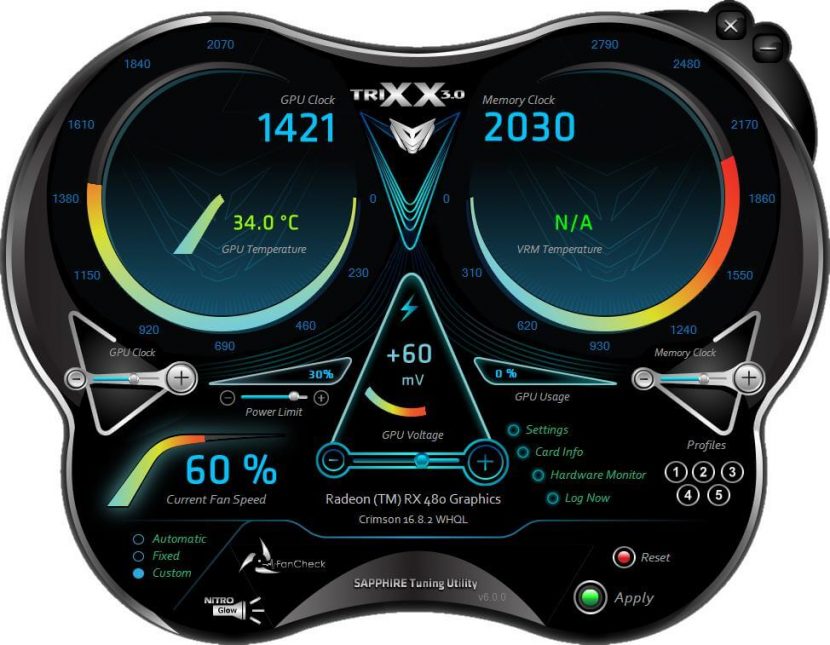 One thing to mention about overclocking on Sapphires TRIXX 3.0.  If/When you restart your computer for any reason, at times the “GPU Voltage”, if you saved it will appear to be “0” (zerp)
as well the “Power Limit” setting. I am assuming this is occurring since it is a beta, it’s not perfect yet but it is good but it is a quirk.  When you do in that case, if just click on the “Profile” you have saved your overclock to and click “Apply”, this will set everything as you last saved it.

So aside from the ability to overclock, TRIXX gives you a few more features, I will list them here.

FanCheck:  A utility built into Sapphires TRIXX 3.0 that allows you to check the life of your fans, since you are actually able to easily replace these fans.

This will individually check each fan 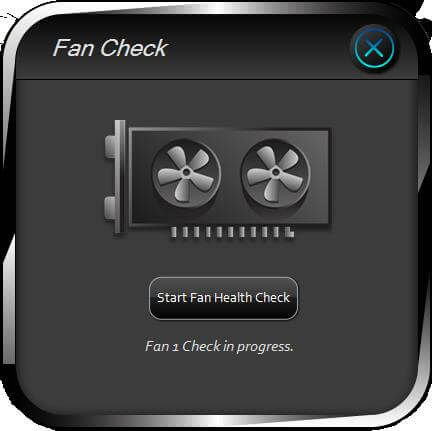 And when complete, will let you know that status of your fans 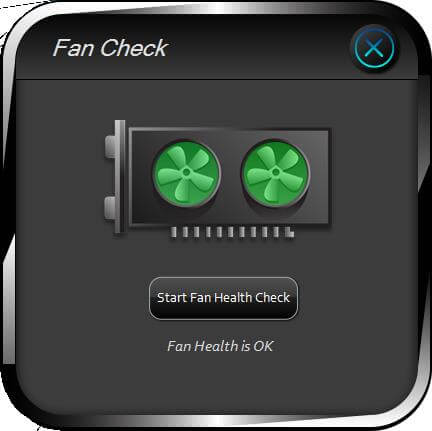 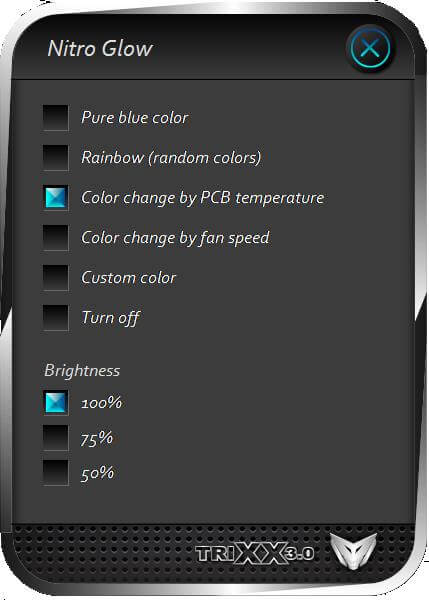 Nitro Glow allows you to change the LED lights on your card.  It’s pretty cool actually, but both of these don’t really say much unless you actually see them work, so I recorded a video for you.  Check it out.

So a few more of the features of this software is the “Settings” button itself. 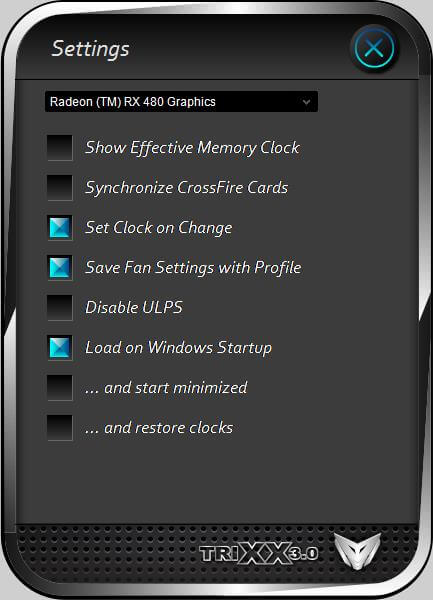 Settings allows you to show effect memory clock, Synchronize crossfire cards, set clock on Change, save fan settings with profile, Disable ULPS (ULPS: Ultra Low Power State: a sleep state that lowers the frequencies and voltages of primary and non-primary cards to save power, it can also cause instabilities with Crossfire and single card configurations).   The other settings are to be able to “Load on Windows Startup”, start TRIXX minimized and restore clocks,… maybe I should enable that one?

There is also “Graphics Card Info” which shows you information on the card.  Most of the information is static information, of course if anything did change it would update, for example when I overclocked, it showed the clock speeds.

Here are the stock settings: 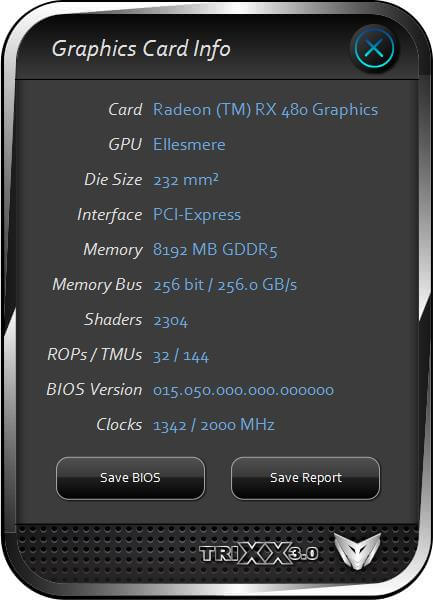 Here are the overclocked settings: 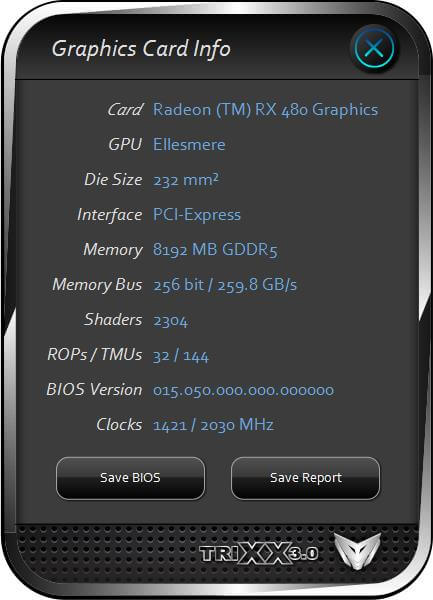 This also allows you to “Save the BIOS” to maybe store for your own purposes, give to a friend or share with the community or maybe adjust using another piece of software and reflash back to the card.

Hardware Monitor, allows you to see all of the specs of the card in real life, as you are overclocking and maybe running through games and benchmarks. Here you can see where the voltages are maybe if the benchmark fails, then make adjustments or if maybe the voltages are needlessly high, you can adjust looking through here as well. 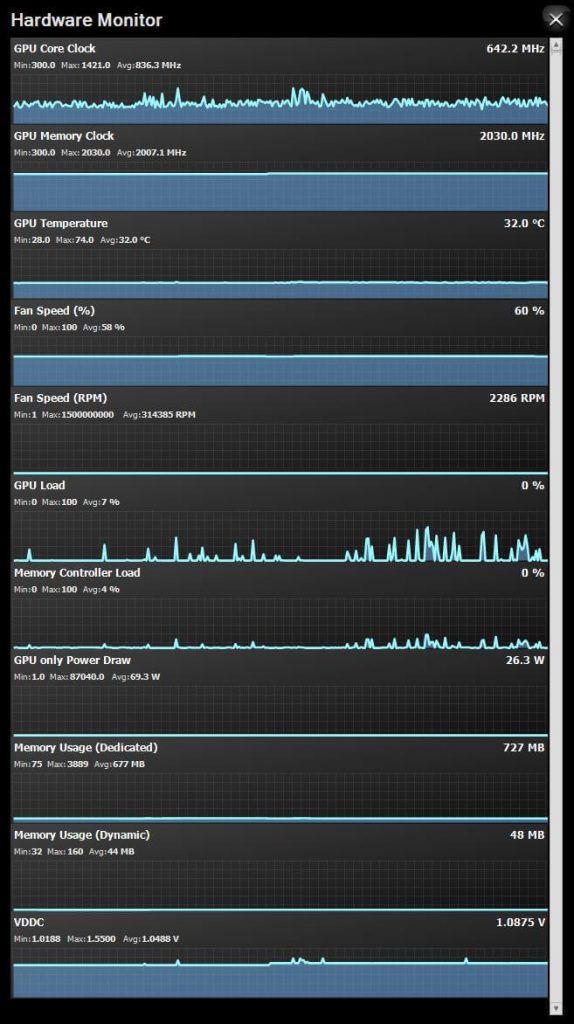 And “Log Now” allows you to create a log to save your metrics to of your Sensors.  Its output is similar to that of GPU-Z.

Benchmarking just builds up heat, I was able to use thermal imaging to see how the card reacted on each piece of the card.  I used the Seek Compact Thermal Sensor that I will be reviewing soon to get this information. 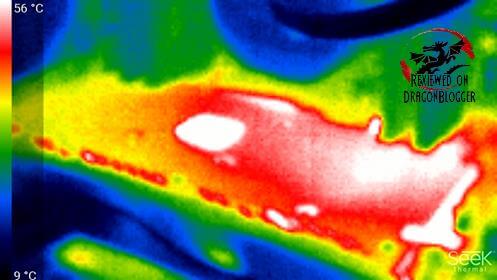 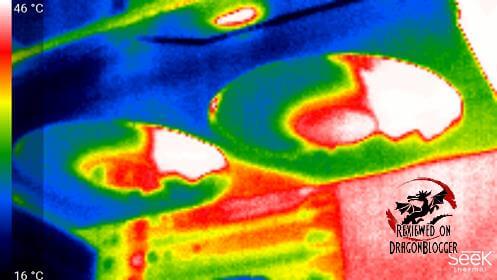 The bottom of the card shows the center of the fans themselves being the hottest, makes sense, that’s where the ball bearings are constantly causing friction among themselves as well as the motor itself of the fan. 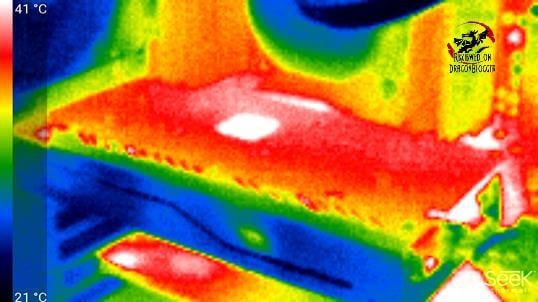 With the cards close to idle for a few seconds, we find the temps dropped 15°C and while the card looks almost the same, the legend updates accordingly to show you the correct temperature.  The hottest was 41°C at the center of the GPU and at the rear, one of the exhaust points.  You may have noticed that the card looks more red than the previous image, but again, it’s all relevant to the legend, focus on the legend.

Seeks Compact Thermal Sensor is amazingly handy, the one I have attached to your Android smartphone, but they have a version that also attaches to iPhones.  You can click on the links to check them out.  Android / iPhone. 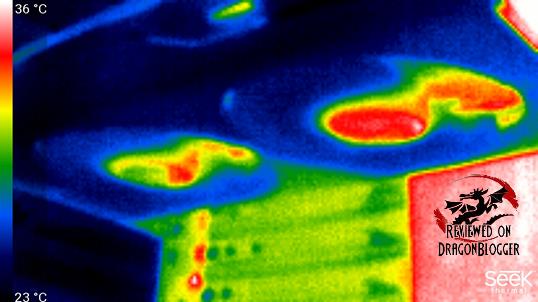 The bottom of the card, shows much cooler of course because this is where the fans are.  A max of 36°C can be seen here, where the motors for the fans are and the cooler parts being 23°C can be found towards the outer edges of the card itself.

While the thermals look hot, the temperatures are made relevant on the legends on the left hand side so you can see they are actually very low. 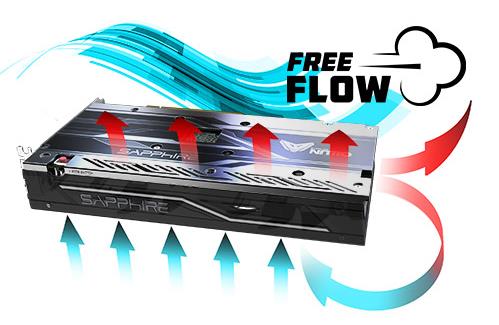 It shows a little on how the vents on the side of the card works.  I don’t too much agree on the rear of the card, venting hot air into the case the cooling itself somehow and being recycled back into the card itself.  It seems to do the how well however, and the top of the card venting into the portion of the case that usually has some sort of exhaust seems like a great idea from our friends at  Sapphire.

You can see in the thermal image below, where the vents are actually doing their jobs, I have it circled in blue. 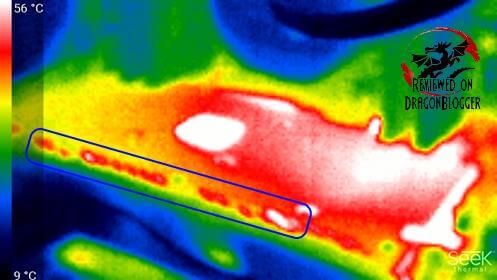 So with all of that, what do you think of the card and its accessories?  We’ll I will let you know on the next chapter “Final Thoughts and Conclusions”