Lots of time was spent on this, more than usually because of how interesting the results were.  Overclocking takes some patience, a pen/pencil and paper since you will be recording your settings.  Mind you, you can use Notepad.exe but if the machine crashes from a bad overclock, you lose everything, or at least everything not saved.

Below I will list the before and after results of the overclock so that you can compare.

First off is with GPU-Z 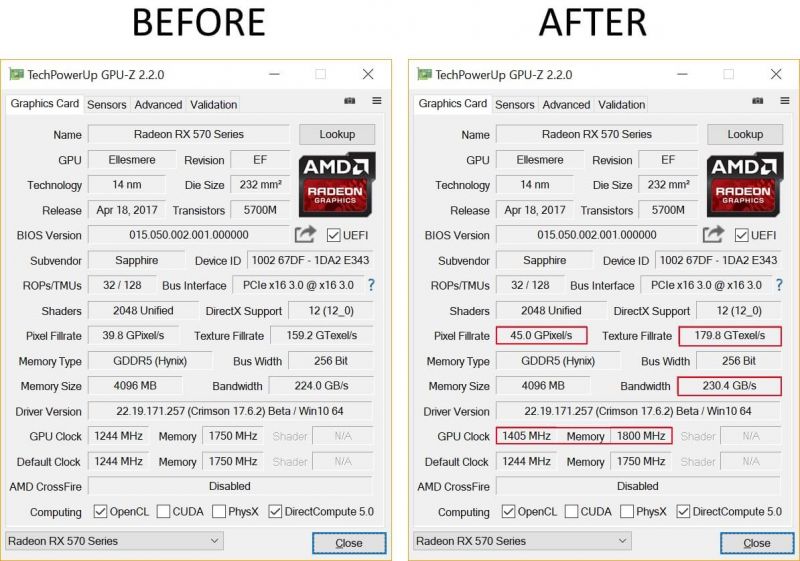 You can see, we have overclocked the GPU Clock from 1244Mhz to 1405Mhz, a 161Mhz boost, that’s a 11.46% increase in GPU Clock speed.  For RAM, a very modest 1750 to 1800Mhz, a tiny 2.78% increase in the Memory clock.  Mind you, I could have gone MUCH further, but I spent too much time on this as it was but if/when you buy this card, surely you can go further and it would be great if you could let us know in the comments below what you obtained.

Overclocking the GPU and Memory not only increase those, but those overclocks improved  the Pixel Fillrate by 11.56% increase, the Texture Fillrate by 11.46% and finally the bandwidth by 2.78%.  So let’s check out what TRIXX shows. 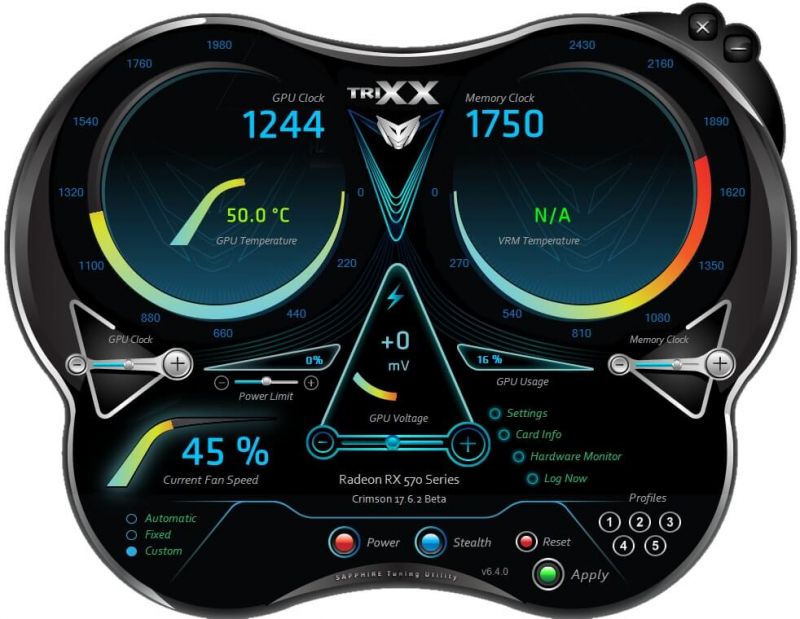 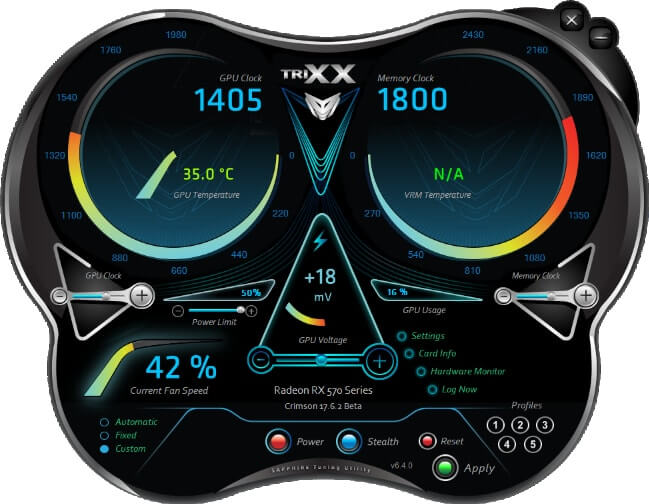 A little less telling, but this is the program I used to overclock.  I also used AMD’s own WattMan. 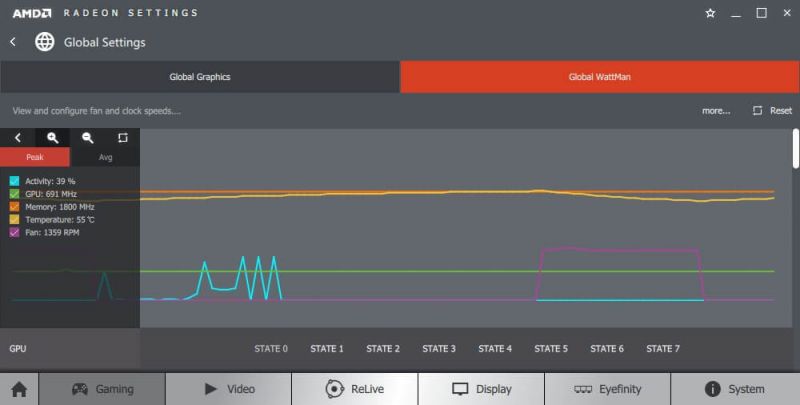 This program helped me figure out a problem I had where my overclocks were not registering correctly.  GPU-Z and TRIXX both showed they were overclocked but WattMan showed me the true clock speeds and the wattage.  I learned used WattMan that I had to raise my PowerLimit and boom, the overclock started working.  WattMan, is not a separate download, it is included in the AMD Drivers.

To find WattMan, with the AMD drivers installed, right click on a clear area on the desktop and select “AMD Radeon Settings”.  In the Radeon Settings, click “Global Settings” then click on the “Global WattMan.  This helped making my overclocking take a lot less time.

Now to overclock, I first modified the GPU Clock 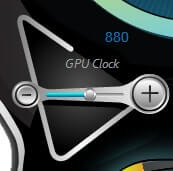 Then I also raised the Power Limit.

As well as the GPU Voltage 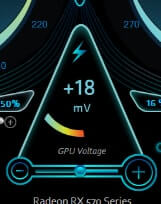 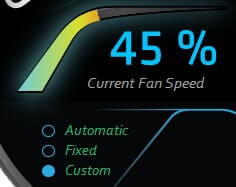 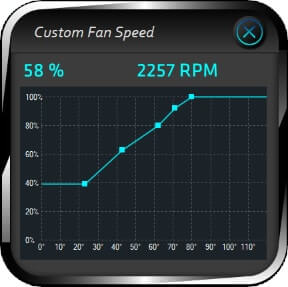 With Custom Fan Speed, we can select what speed the fans will rev up to when it hits that specific temperature threshold.  The settings above is what I set for the overclock but even if you buy this GPU, you may not be able to hit these scores, but you may actually be able to get better scores as well, its a lottery really.

TRIXX has a lot of uses, Overclocking and Custom Fan Speeds are two of them.  Time for the comparison. 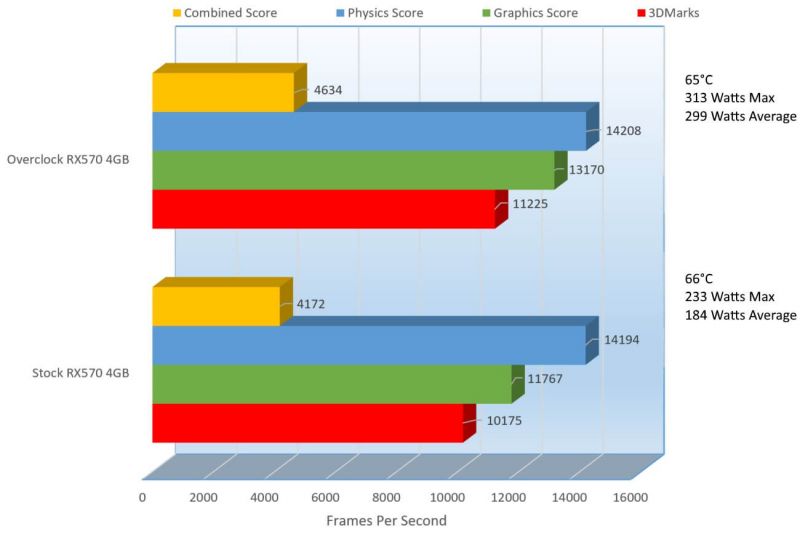 Sadly, the score did not raise the spot of the system here in Time Spy but let’s see what the overall score improvement is. 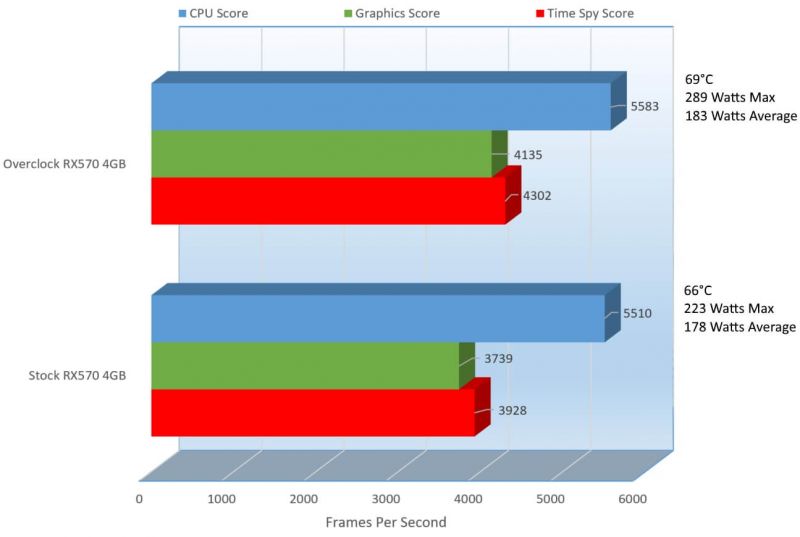 On Time Spy, there is not much of an increase, but there is still an improvement.  With the Time Spy score, there was a 8.69% increase.  In Graphics Score there was a 9.58% increase and in CPU score we find a tiny 1.31% increase.  The temperature did go up 3 degrees and there was only a 2.73% increase in average power consumption.  Odd that 3DMark liked it, but Time Spy not so much, at least it was not negative.

Since there will be a lot more information here, I will break the benchmarks into resolutions.  Let’s start with 1920 x 1080. 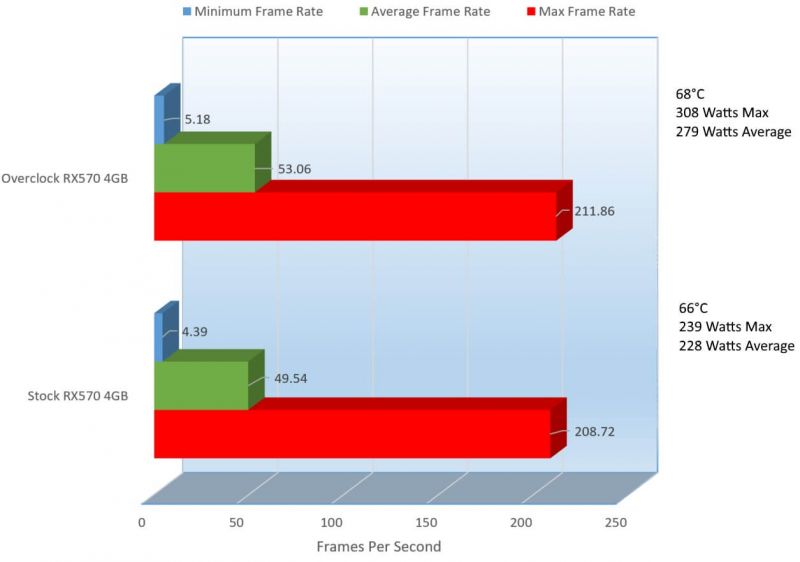 On Average, we can see that performance improved by 6.63% and with that a 2°C increase in temperature and consumed 18.30% more power than in stock.  All across the board, in Minimum and Maximum the score improved so that is a great sign.  Now on to 2560 x 1440. 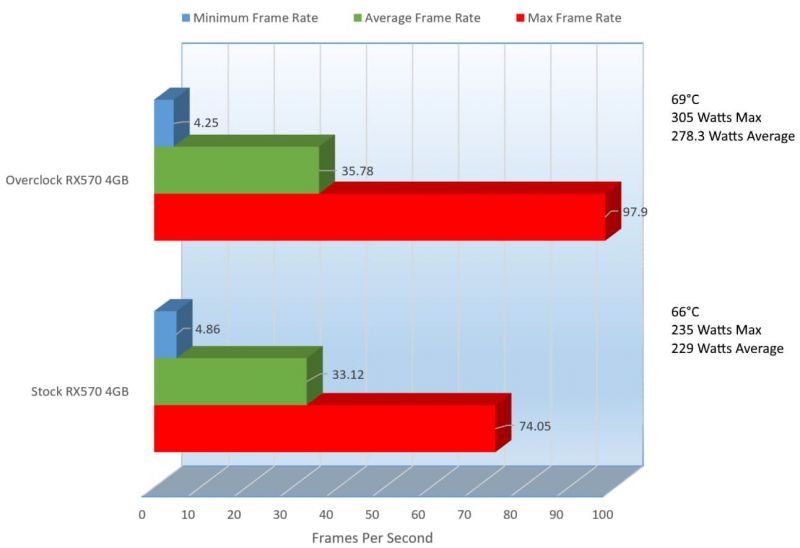 We can see yet again another improvement here, though it’s not across the board.  On average, we can see there is a 7.43% improvement, which is the most important and on Max Frame Rate, we can see a huge improvement of 24.36%.  Max is not as important as the Average but it is nice to see some spikes and then for minimum, here is where we see a decrease, but it’s not too bad only at 12.55%.  There is two times the increase in Max than the decrease in Minimum, but both are still not as important as the Average score.  Let’s hope we can keep this momentum.  Let’s check in 3840 x 2160. 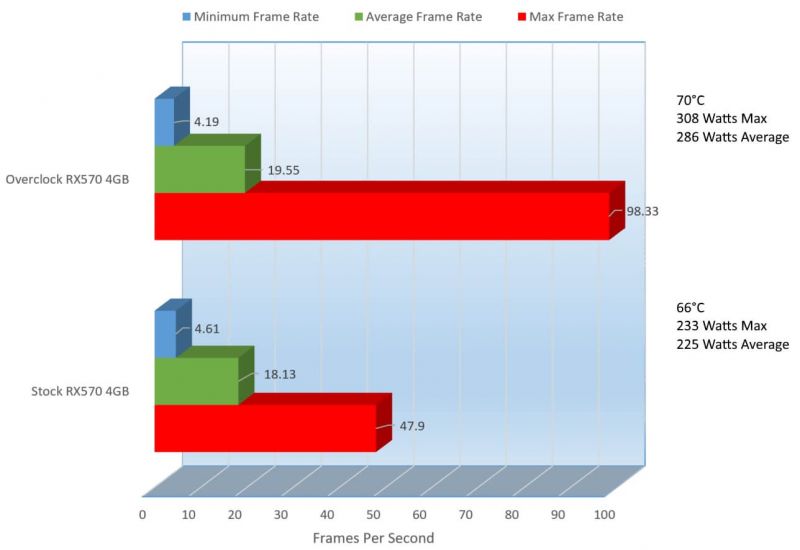 It seems the trend continued, not only on average but on Max and Minimum.  We can see on average the performance improved by 7.26%, on Max 51.29% then a decrease on Minimum by 9.11%.  The difference between Max and Minimum was much greater, time 6 even so that was good, but still at 4K, that average cannot cut it.  Though with a 570, there was never a doubt that 4K especially with Very High or Ultra settings that the performance would not be good.  On Metro, the overclock helped 1920 x 1080 become more playable, but still suffered a bit at 2560 x 1440 and 3840 x 2160.

So let’s do some comparison with Thief. 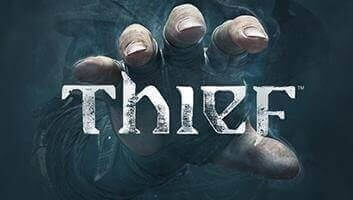 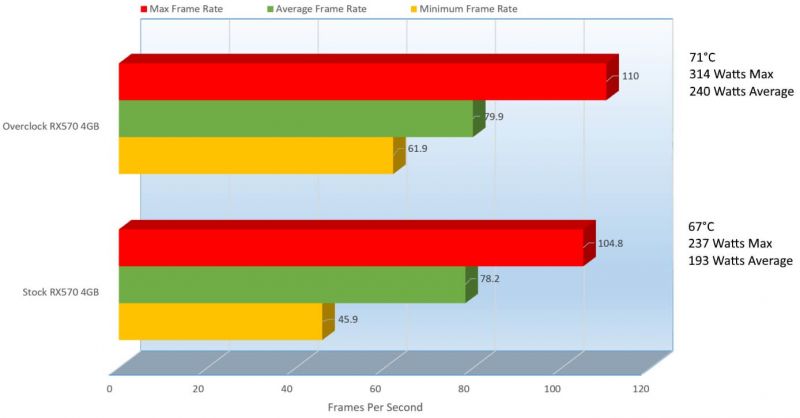 Now the bad part is that with the improvement, came the huge wattage increase.  On Average, the overclock consume 19.59% more power and increased thermals by 5.63%.  Is that improvement worth it? 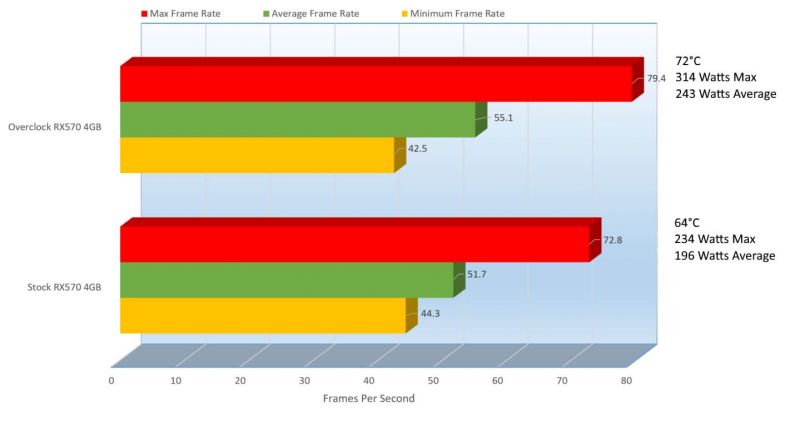 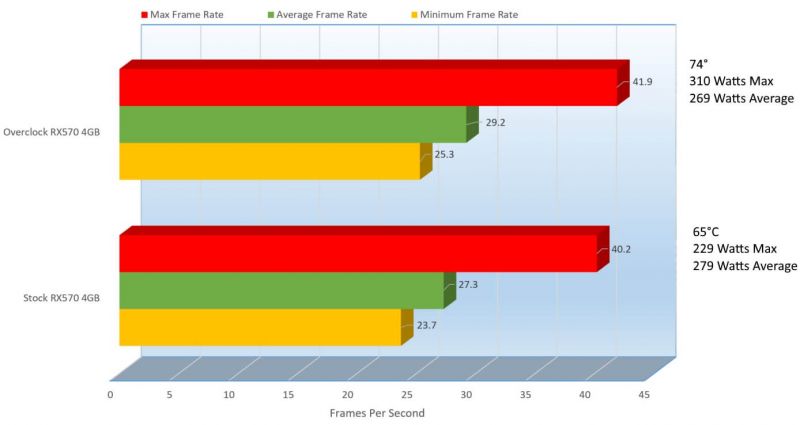 Event at 3840, the overclock could not save it.  While there was an improvement across the board, it was minuscule.   On average, we pull an additional 6.51% improvement, and power consumption actually dropped 3.58% though the temperature increased 12.16%, surely a fan curve change would fix that though.  Min and Maximum improved as well, but nothing significant to speak of.

Let’s get a little closer to Laura and see what she has to say about things. 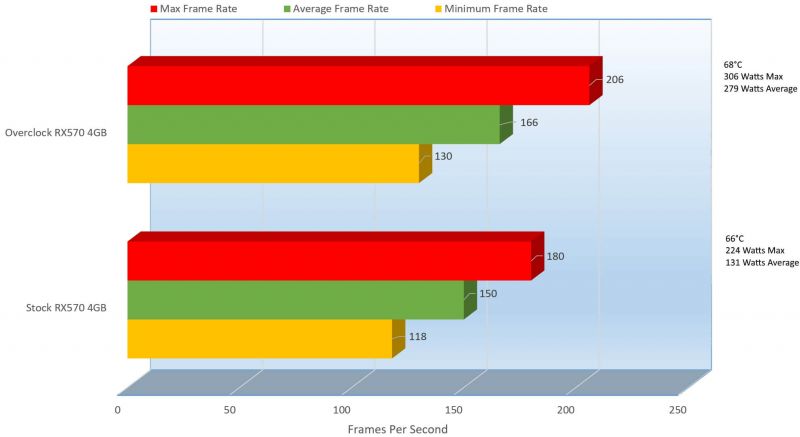 Alright, some nice increases here at 1920 x 1080.  On average, we gained 9.64% improvement on performance.  Problem is Laura had no problem eating up the wattage, it tore through 53.04% more power than on stock, but I did raise to the limit the power limit.  I might have been able to get away with a setting of 40, but I figured to max it out.  The temperature here only went up about 2 degrees.  Like with most of the rest, the improvement was also on Max and Min. 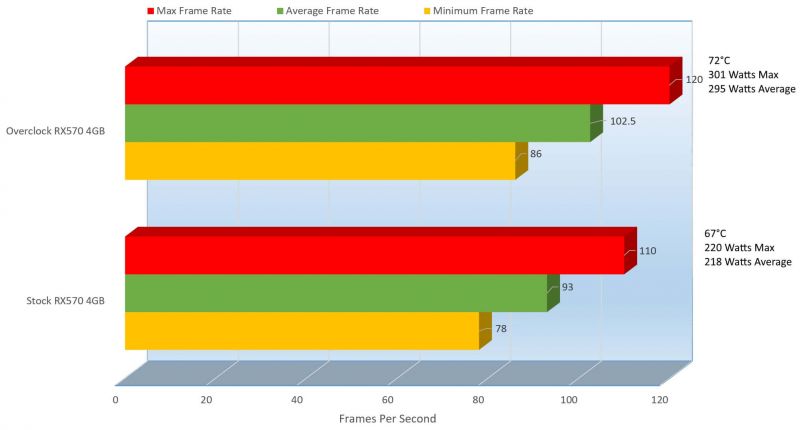 Yet again, Laura takes the stage and takes no prisoners.  On average, we can see a 9.27% improvement in performance, at 2560 x 1440, this game even on Ultra is still amazingly playable.  Though, like a trainer packs on the carbs for a massive work out, Tomb Raider packs on the power draw, consuming 26.10% more power and a 6.94% more heat, though still very manageable. 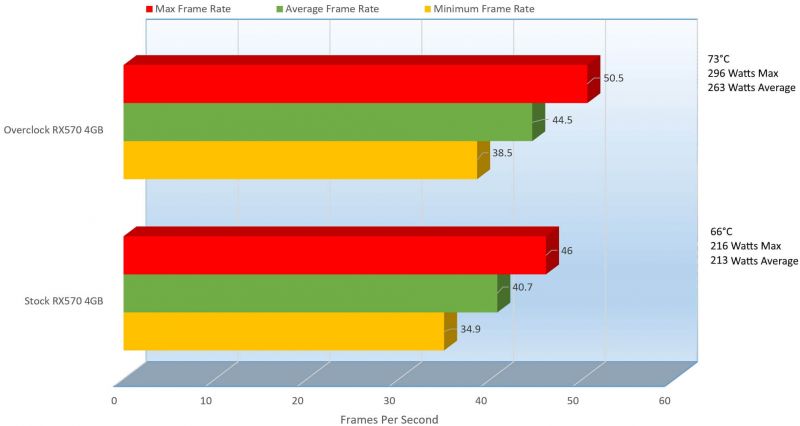 I thought we had some good momentum, but it looks like the 4K beast was even too much for Laura.  While there was an increase throughout this test, it still did not help to make this very playable.  On average, there was a 8.54% increase in performance and the power draw was slightly smaller increasing only by 19.01% and temperature increase by 9.59%.  Both increases are manageable and with a better overclock, the performance would have been better.  Last up is Tom Clancy’s The Division. 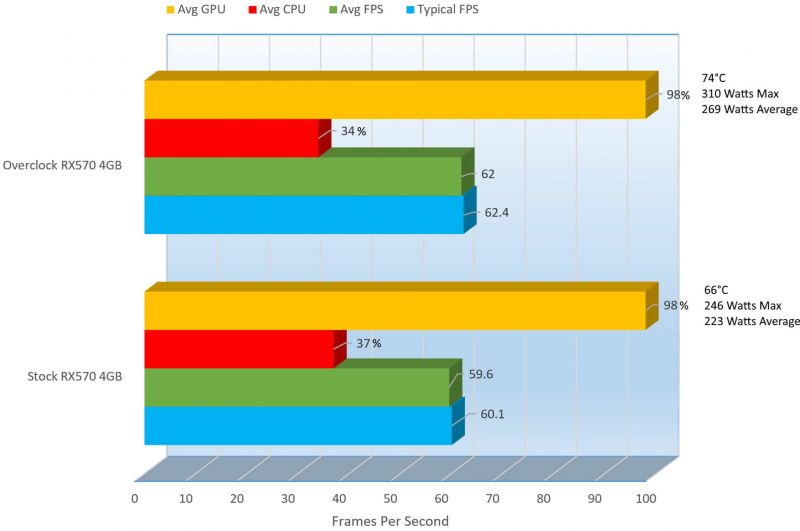 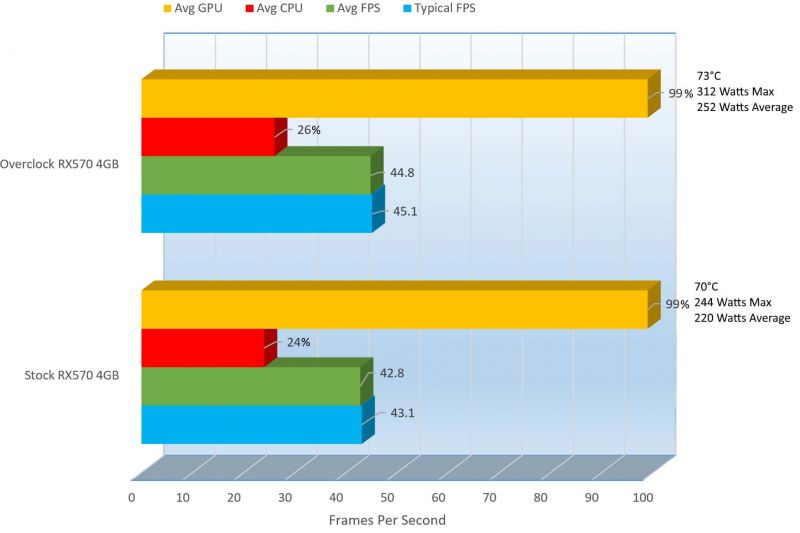 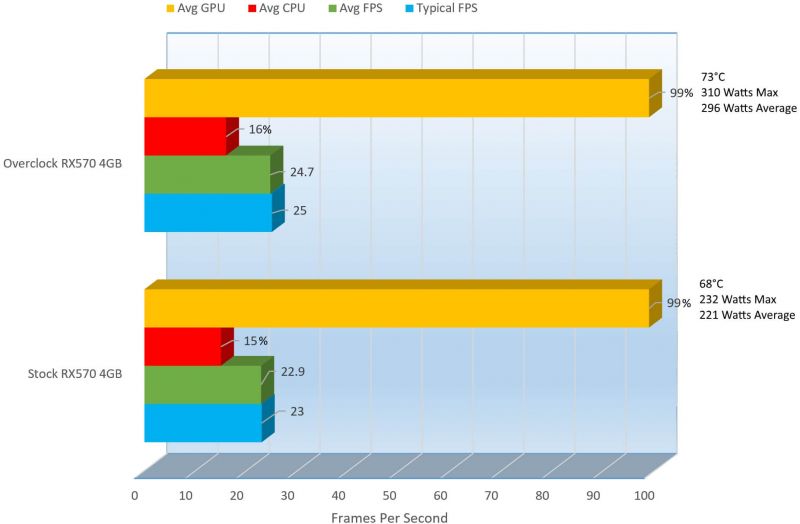 It was pretty bleak to begin with but still, there were gains.  On average, there was a 7.29% increase in performance, with a 5° increase in thermals and a rather large 25.33% increase in power consumption.  This crippled the card with such high settings, but this card is not really meant for 4K, but it pulls its weight where it can.  Here as well, the CPU tried to pull a little more coming up 1%.

Finishing this off, let’s see how this card does on my final thoughts and conclusions.