When I first got this card, I was thinking that this was going to be such a boring review because well, it shouldn’t be able to do much right?  I mean, it has not been horrible, but can it get better?

Turns out this card is an overclockers dream, it can overclock incredibly high and I went kind of high, but I did not want to spent too much time on it.  Check out my overclock below. 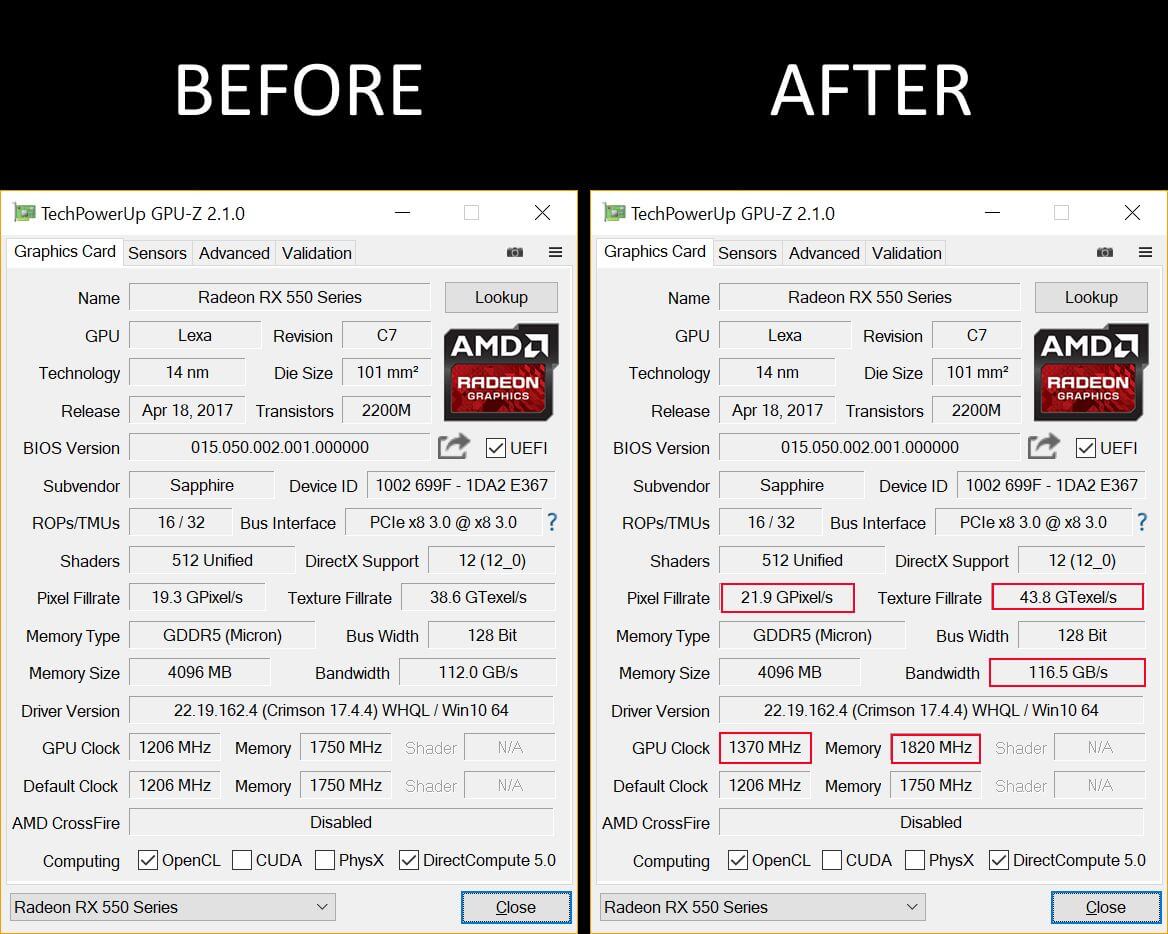 You can see here that I have overclocked the GPU by 164Mhz and the memory by 70Mhz.  Now a byproduct of overclocking the GPU and the memory is that the Pixel Fillrate increase by 2.6GigaPixels,  5.2GigaTexels and the memory bandwidth improved by 4.2GigaBytes per second.  How did I achieve this, well I am not telling!  Haha, no I am just kidding.

To overclock the card, I used Sapphires own TRIXX.   Here are the default settings 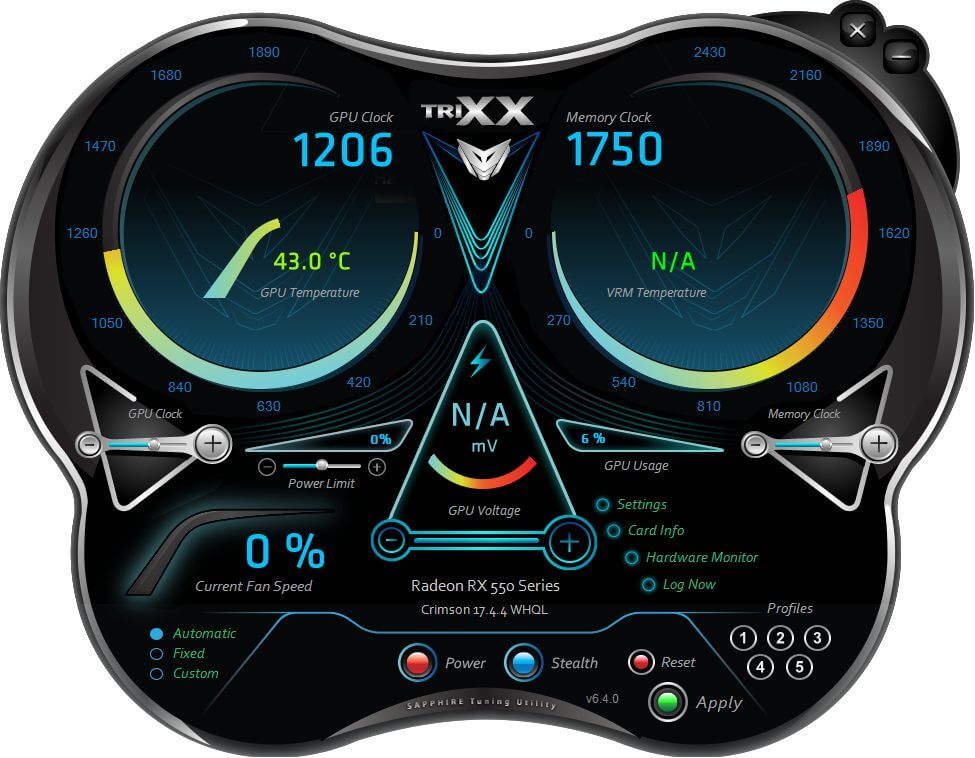 And now the overclock 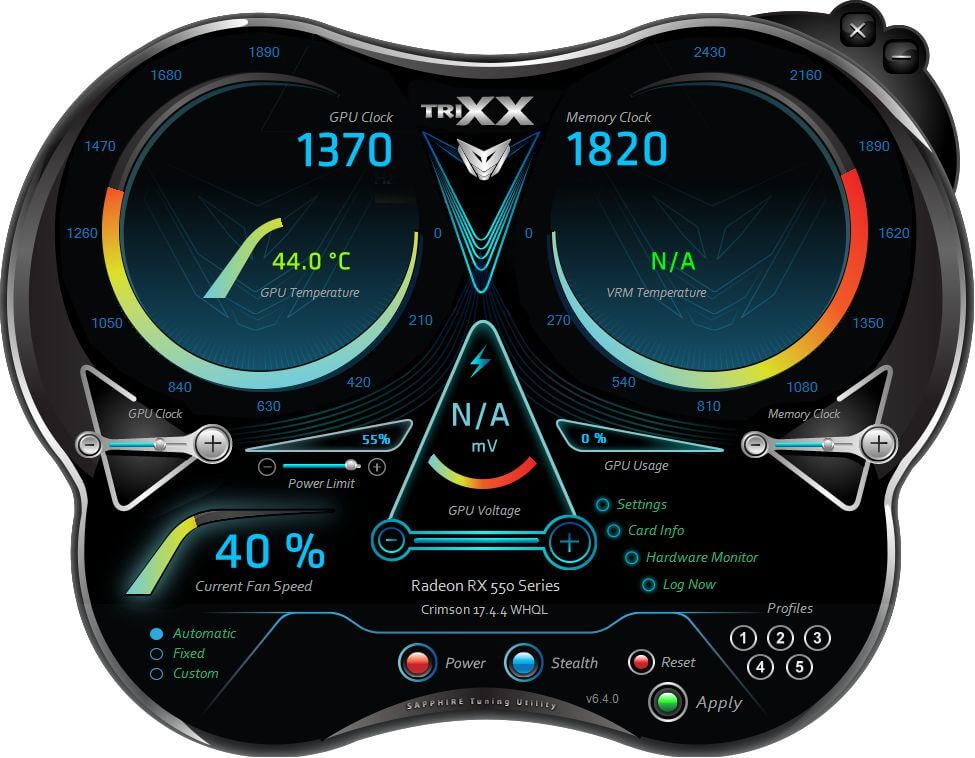 This was one of the easiest overclocks and most effective I have done in quite sometime, I am by no means a professional overclocker, though I am pretty good at it.  So what I did here was I raised the GPU Clock by 10Mhz at a time until I hit the comfortable 1370, raising the “Power Limit” settings to 51% (I know it is higher here and I will get to that in a sec).  I could have gone higher but I did not want to waste too much time on this.

After that, I raised the memory clock a bit, each time on both while I tested, running a pass of TimeSpy and Metro Last Light until everything was perfect.  By perfect, I mean no artifacting and no crashing.  The heat, this time I left to automatic and it took care of itself nicely.

Now back to the 51% versus the 55% Power Limit setting you see there.  At 51%, everything was working fine, until I started recording the results.  I got through 3DMark and TimeSpy with no issues, and the 1680 x 1050 in Metro Last Light but when I got to 1920 x 1080, it would freeze.  I knew it could only be the Power limit, so I raised it 1 point each time testing afterwards until I reached 55% and everything worked fine.  This of course meant I had to go back and retest everything, so here are my results.

Since there was an increase in performance, as we can expect our average power consumption went up to 136 Watts where before we saw 113 Watts on average.  This was a 16.91% increase in power usage and with that the temperature went up to 70°C up from the stock 67°C, a temperature increase of 4.29%, but the fans were still set to automatic.

Now the total score is not the only thing that went up, so let’s do some more comparison and break down how that score came to be. 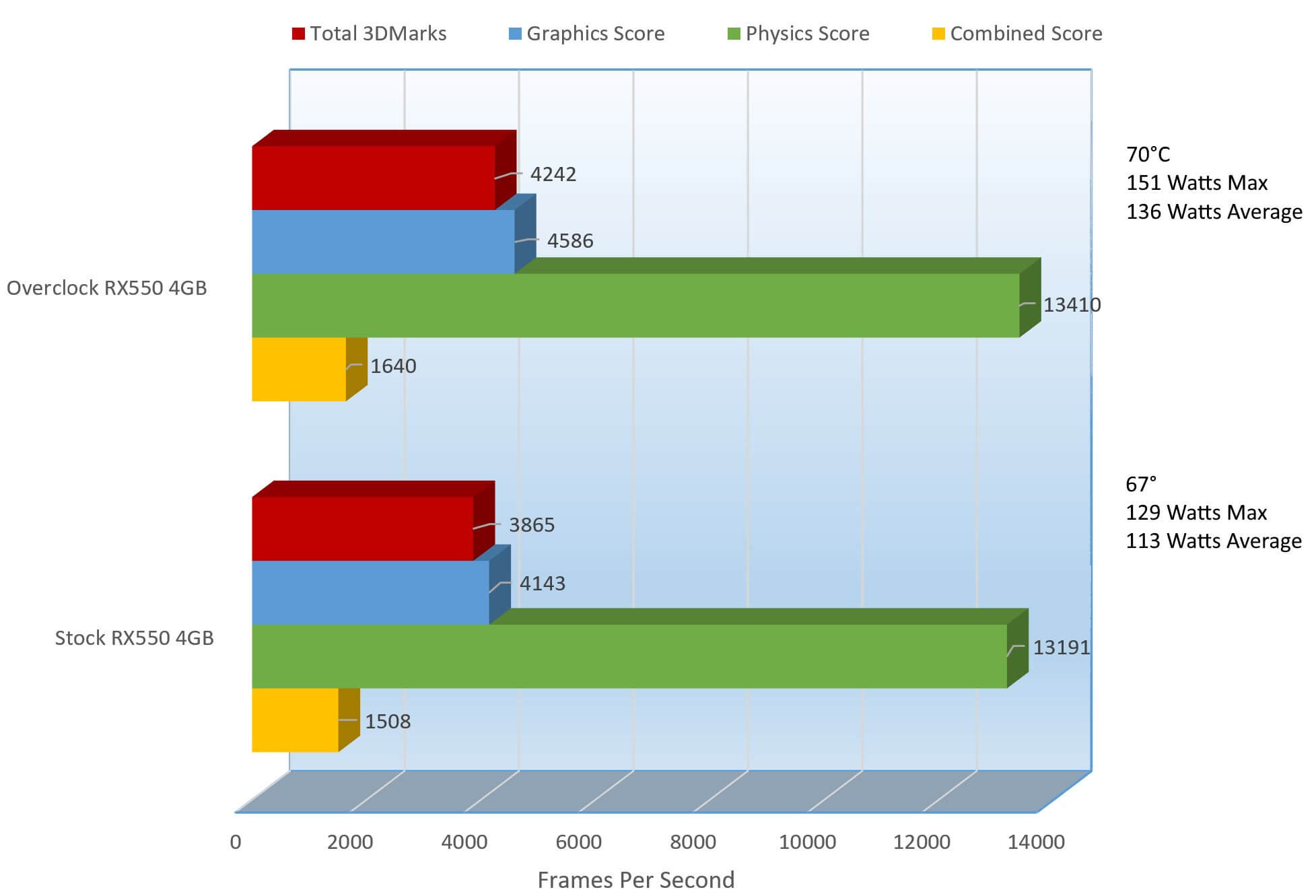 Let’s see how TimeSpy reacts to this bump.

That increase though did nothing for the rankings, but I was impressed.  So let’s check out the complete comparison to see how the total score was formed. 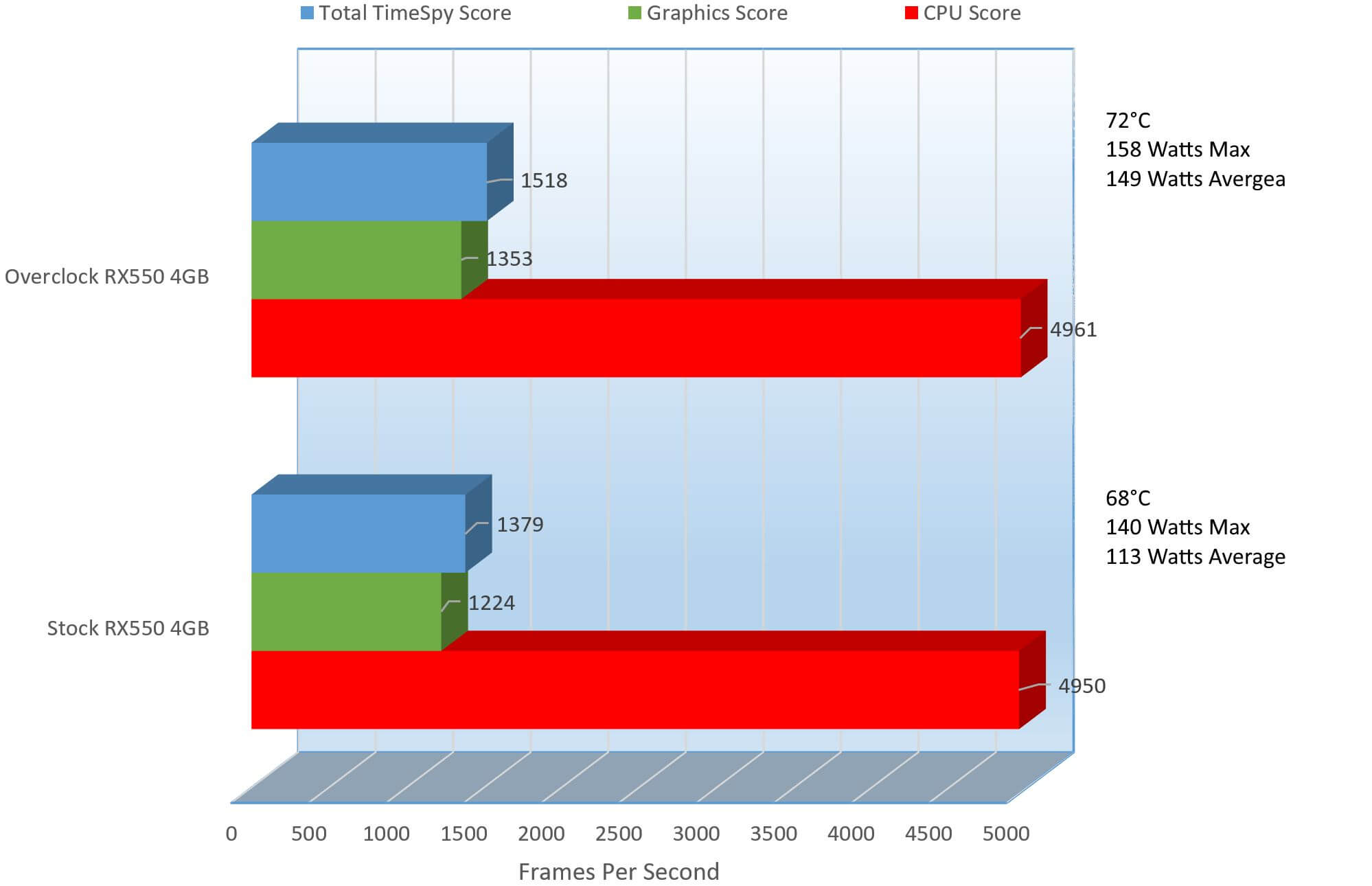 Yet again we can see a complete improvement in the results.  On the graphics score we can see a 9.53% increase in performance and in the CPU score, even though we did not overclock the CPU at all, we can see a tiny but mention worthy 0.22% increase.

On the bad side, there was a 4 degree increase in thermals and a 24.16% increase in power utilization, but it is to be expected.  The card now is working a bit harder, so it is understood that thermals and power consumption have gone up, though we could have lowered the heat by raising the fan speed, but they are still low enough, so I did not want to raise the noise level.

Let’s check to see if the results are as positive in games,… you know where they mater.

For the games, we are going to break the results sections by resolutions to make it a lot easier to read.  We will start off with 1680 x 1050. 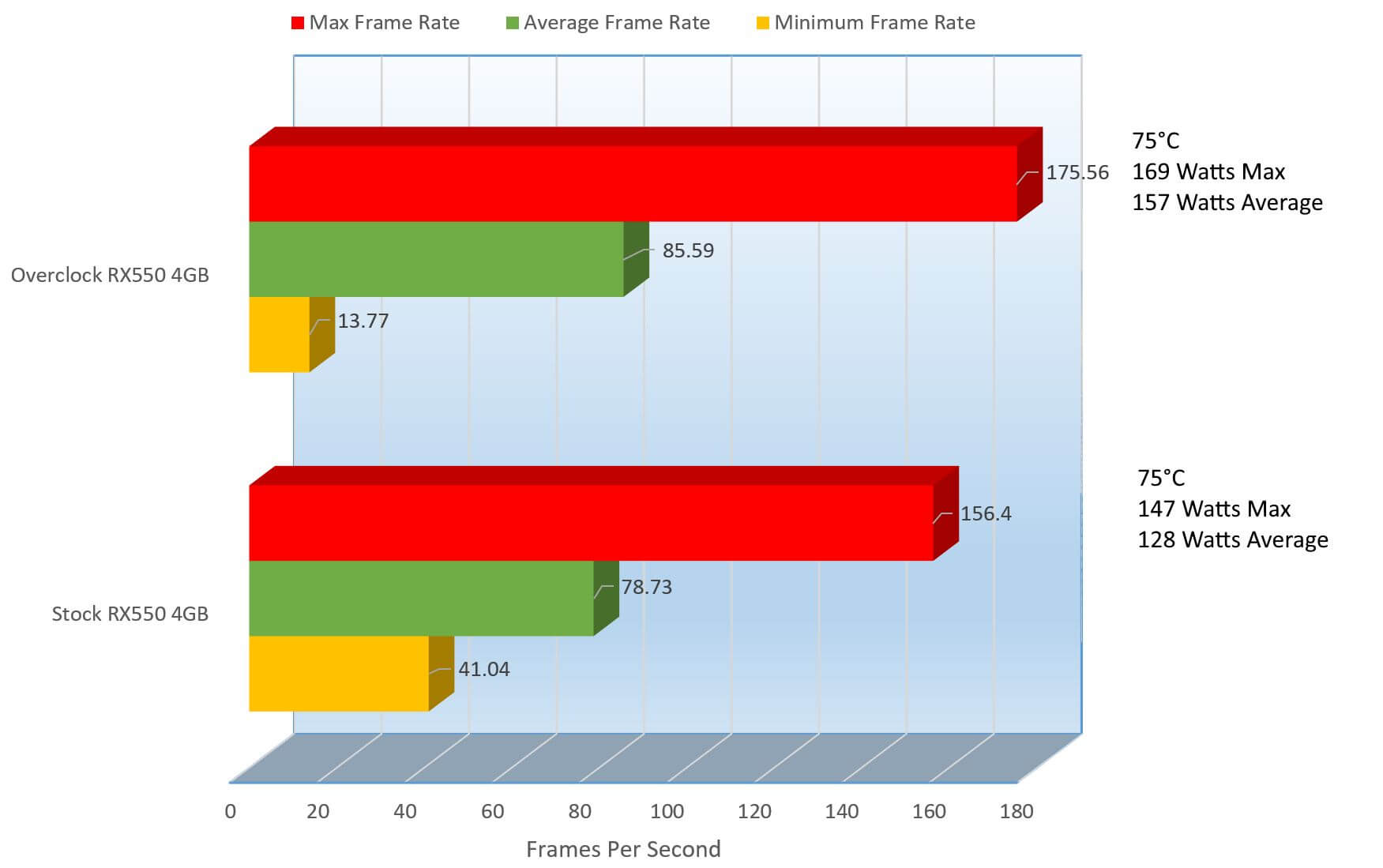 We are off to a good start here.  On average, the overclock performed 8.01% higher with the same temperature, the fan does a real good job here.  On the negative but to be expected side, we can see there was a 18.47% increase in power usage on average.  The results prior to overclocking were already great, but let’s see what 1920 x 1080 will tell us. 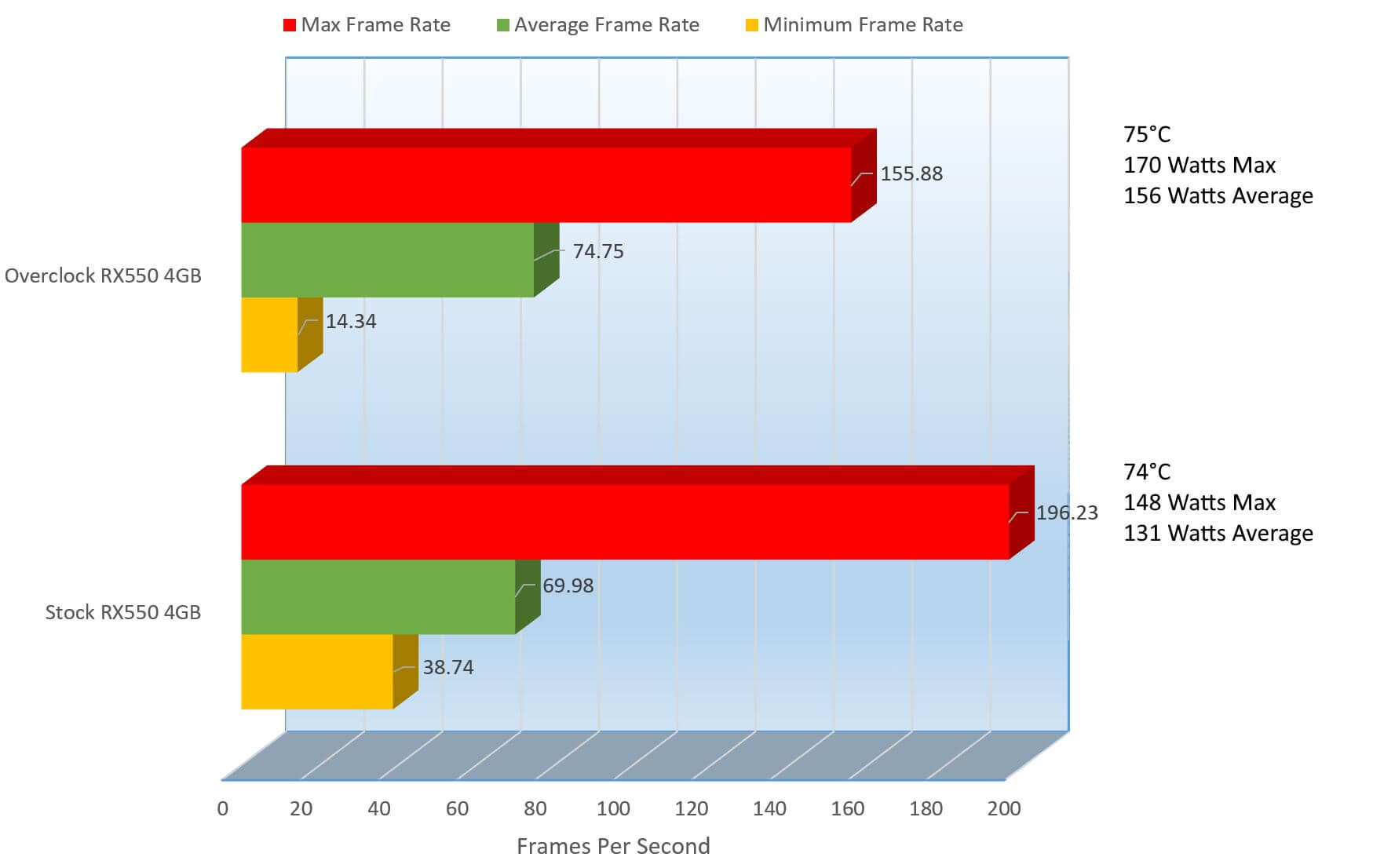 Yet again, the overclock is working in our favor, as it should of course with a few things to point out.  Oddly enough, it seems the minimum and maximum frame rate dropped from 38.74 to 14.34, a 62.98% decrease and dropped 20.56% on the Max frame rate from 196.23 to 155.88 FPS.  While these are odd, it seems that maybe the overclock keep things a little more under control as those FPS’ were already extreme, but more importantly it raised the average frame rate from 69.98 to 74.75 FPS, a 6.38% increase.  I myself don’t really care what the max frame rate is, though the minimum can be a little scary at times because that means at any point in the game, it can hit that minimum FPS, and 14.34 is totally unplayable but it’s usually a quick blip. 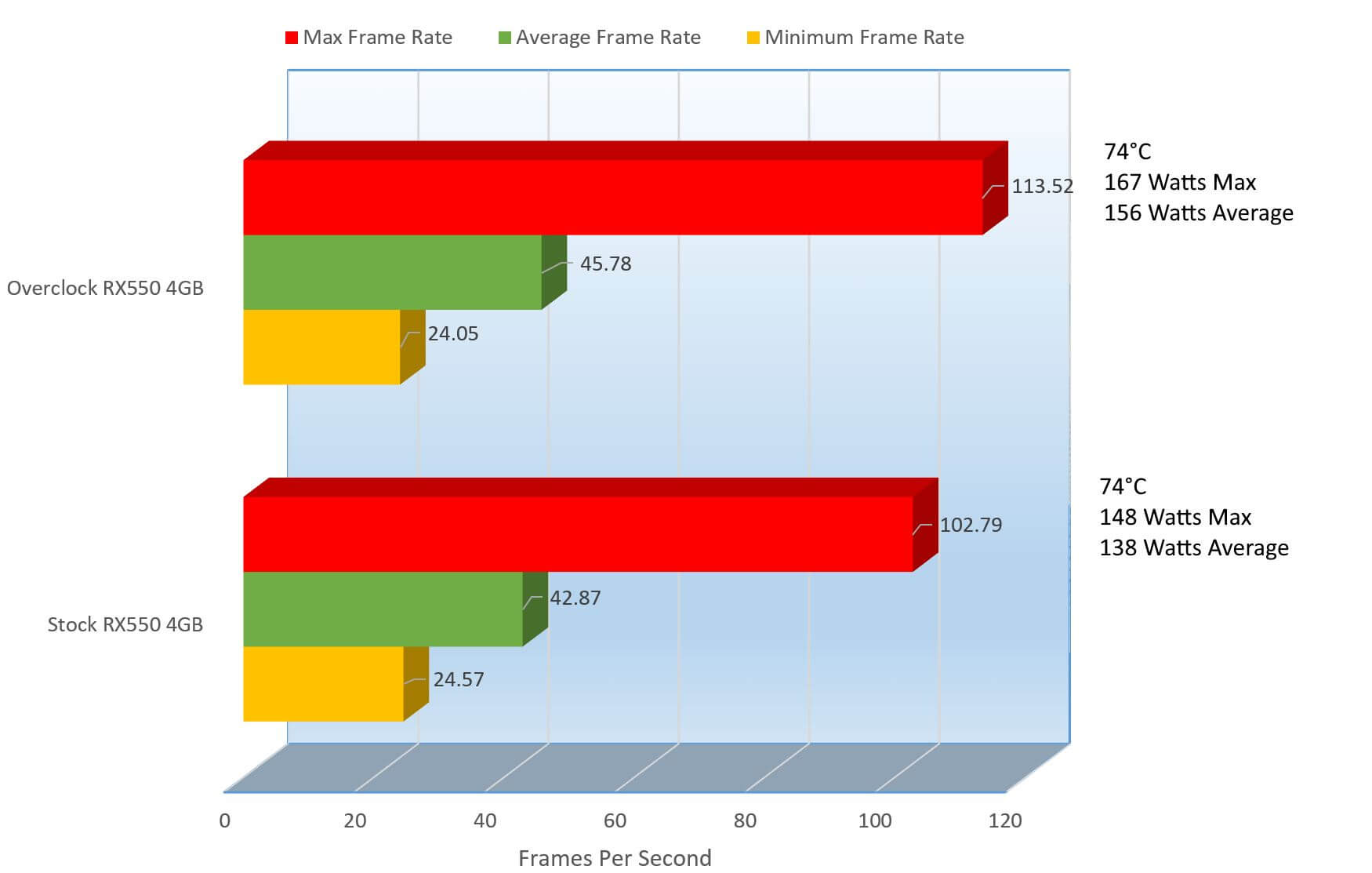 So I have to say, I was let down here.  I was kind of thinking it would raise the frame rate from 42.87 to somewhere in the 60’s but the frame rate only rose 6.36% to 45.78, still an improvement but not what I was hoping for.  Regardless on that, we notice that the average power consumption went from 138 Watts to 156Watts an 11.54% increase.  Even though the score only went up about 3 frames per second, it’s still an increase and the thermals stayed the same.

So in Metro Last Light, we did see some improvements, nothing huge, but sometimes all you need is a tiny bump to make something playable.  So now let’s move on to Thief in which we did have a few problems with, let’s see if it helped out. 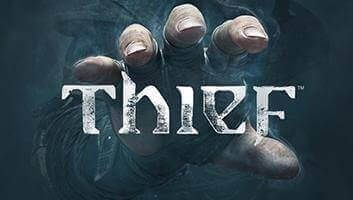 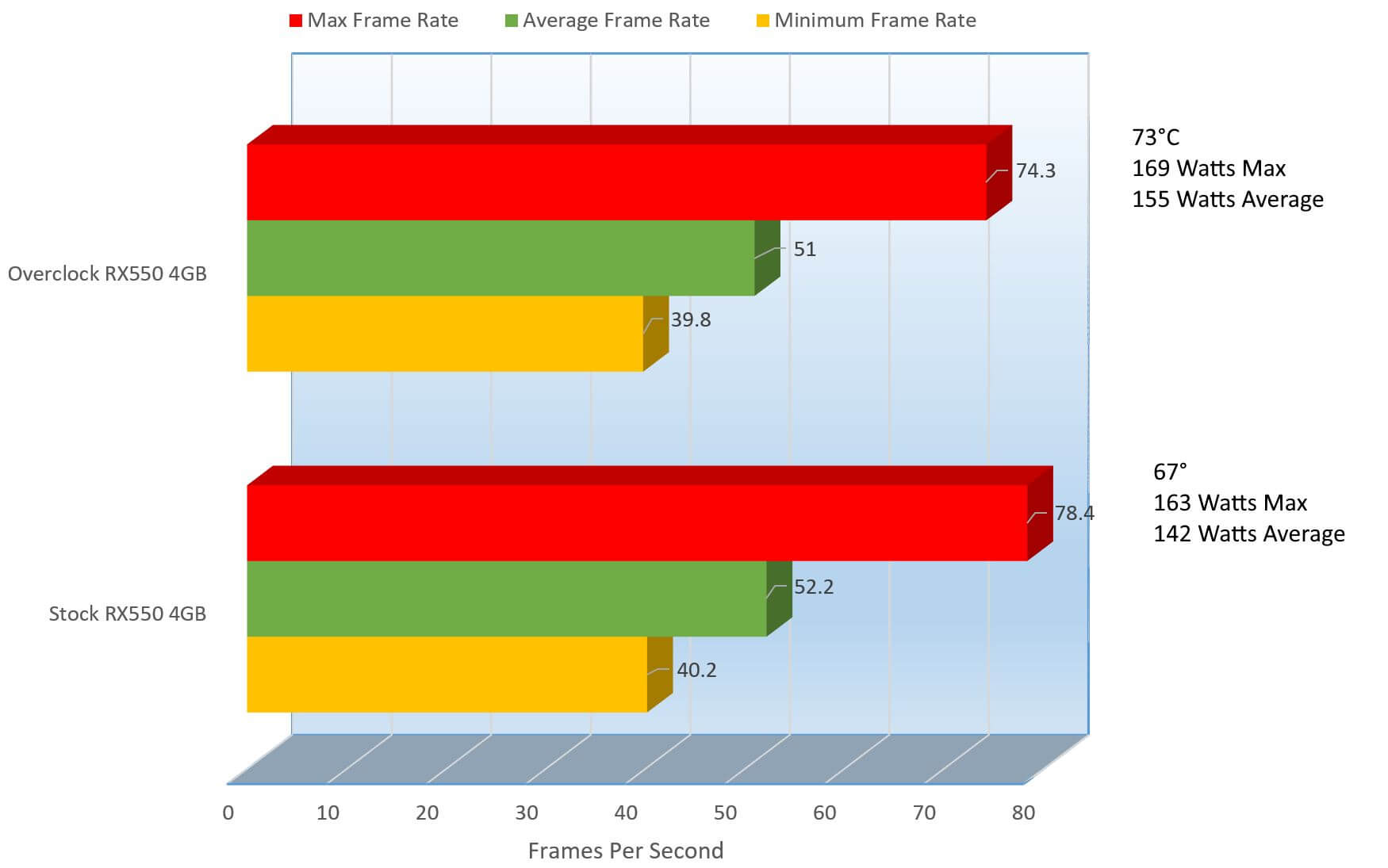 You know, and I was going to stop using Thief, but it looks like its kicking this cards butt.  On the stock settings, the game was on the cusp of being playable at 52.2 (I would still play it like that) but the overclock actually made the game drop a frame per second, down to 51 frames per second.  I mean, 1 frame per second is nothing really but still I would have expected some improvement.  The electric company would be happy being that it now consumes 8.39% more power on average and actually got 6 degrees warmer as well.  Let’s see what 1920 x 1080 will do for us. 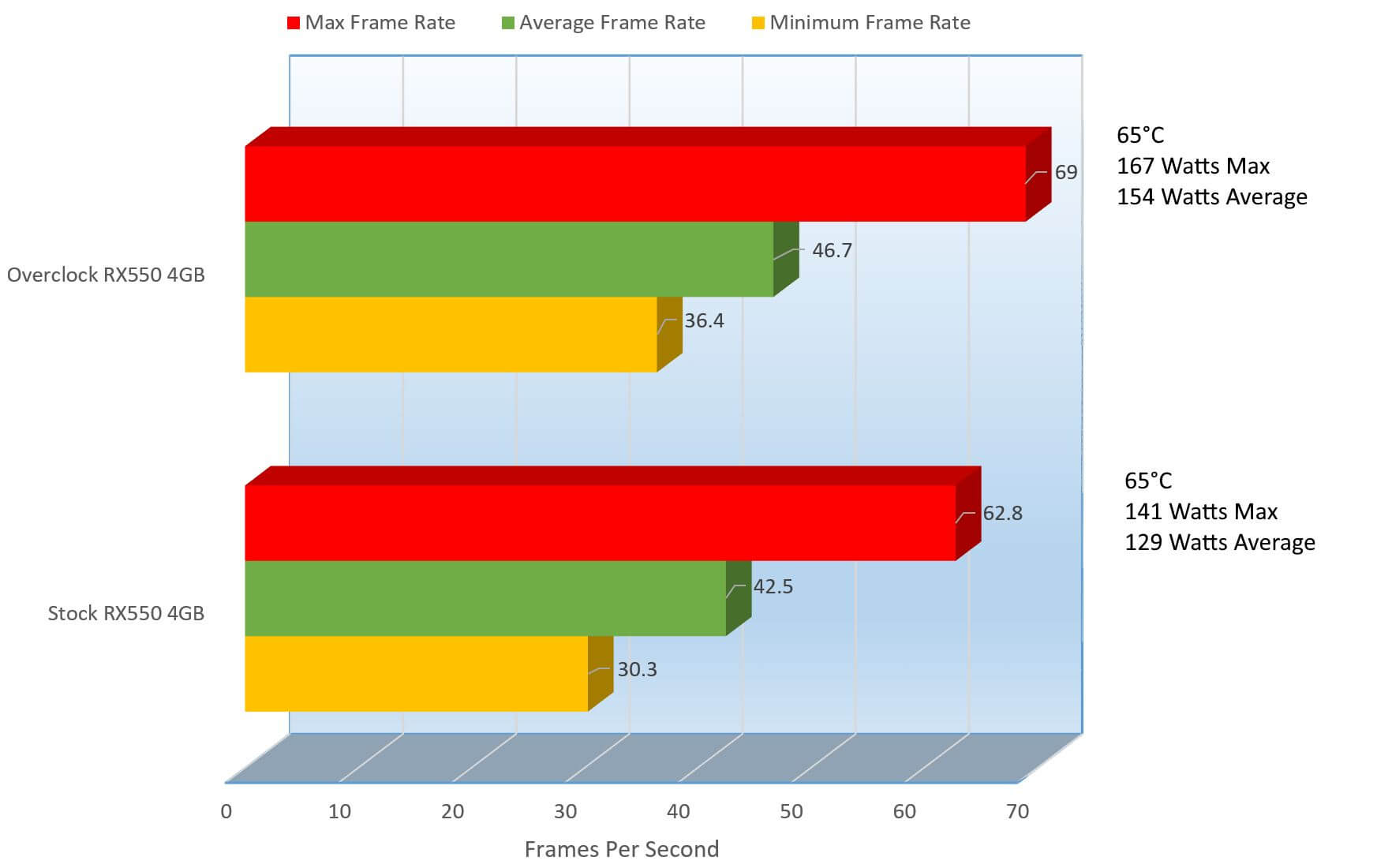 Well, it looks like the performance on Thief did not improve much here, but there has been some improvement at least.  We can see on average we received 46.7 frames per second a 8.99% increase in performance and the heat did no go up at all, though the wattage increased by 16.23% from 129 Watts consumed on average to 154 Watts.  Thief is really stealing performance here, I don’t know if we can expect any better, but let’s check on 2560 x 1440. 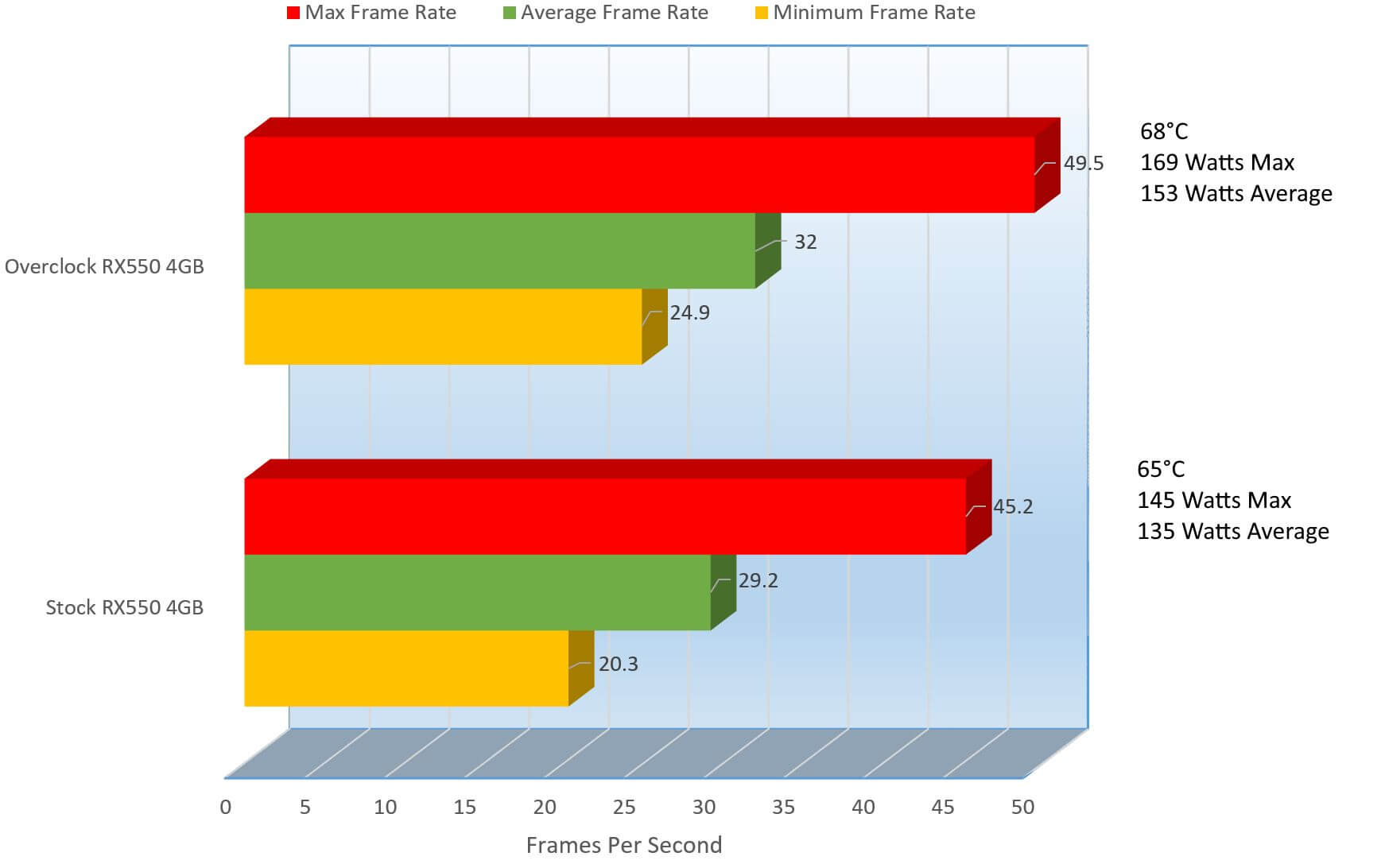 Yet again I feel a little disappointed here, trying to squeeze some more performance out of this card, I get only a tiny improvement.  Maybe what I thought was a decently impressive overclock was only an incredibly slight bump, I will need to test Thief as well while I do my overclocks not only for stability but for improvement.  On average, we can see 2.8 frame per second improvement at 32 frames per seconds, 8.75% above the stock score of 29.2.  That bump only raised thermals by 3 degrees but raised the average wattage used by 11.76% starting at 15Watts to 153Watts on Average.  Let’s see if Laura can boost my spirits. 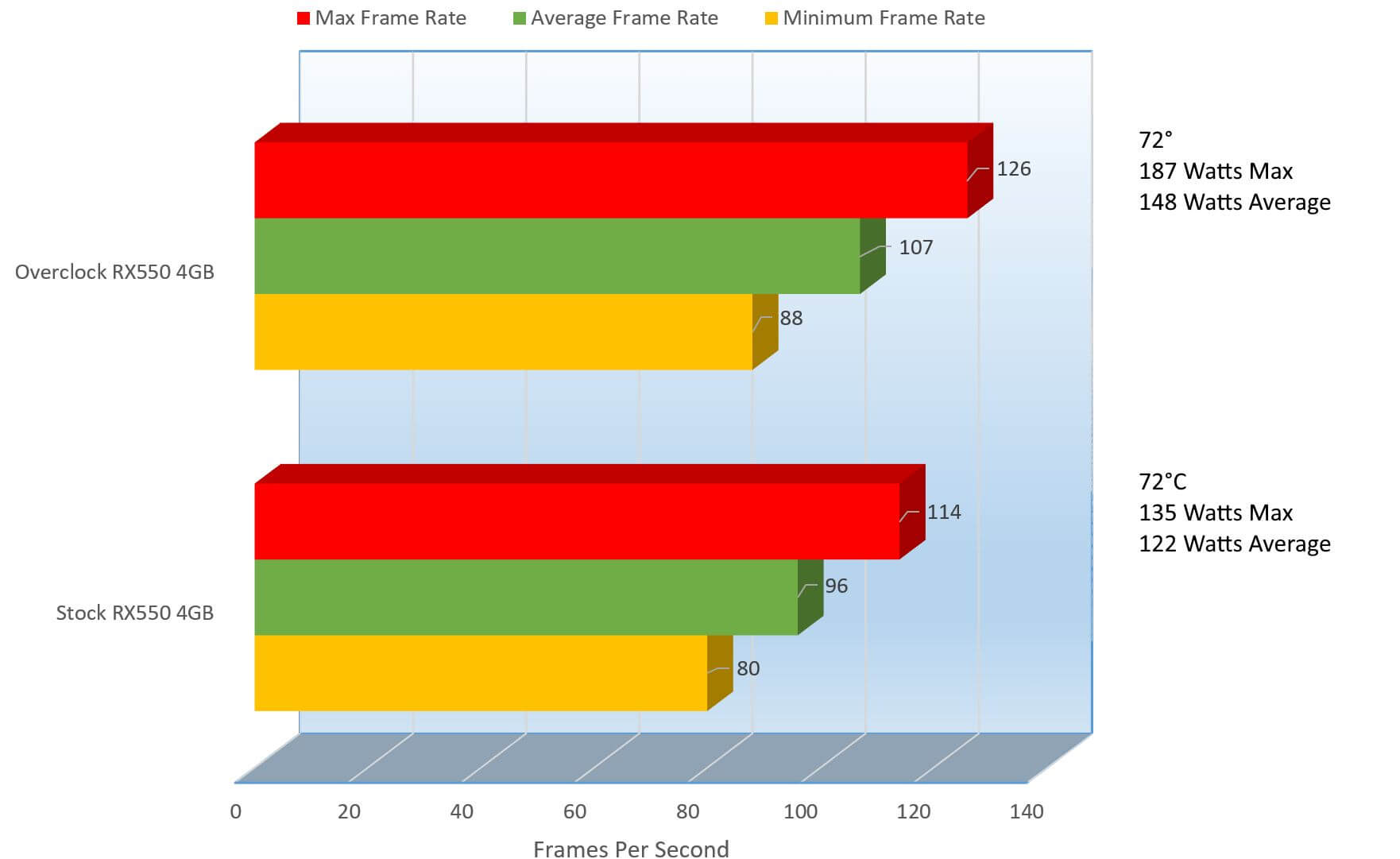 Ok, here we can see Tomb Raider picking up some slack, though it was already amazingly playable before at 96 FPS.  On the overclock we pick up some steam on the average frame rate from 96 to 107 FPS, a 10.28% increase in performance.  The temps kept the same along both tests but the average power consumption went up 17.57%.  There was an improvement, let’s see what this means for 1080P and above. 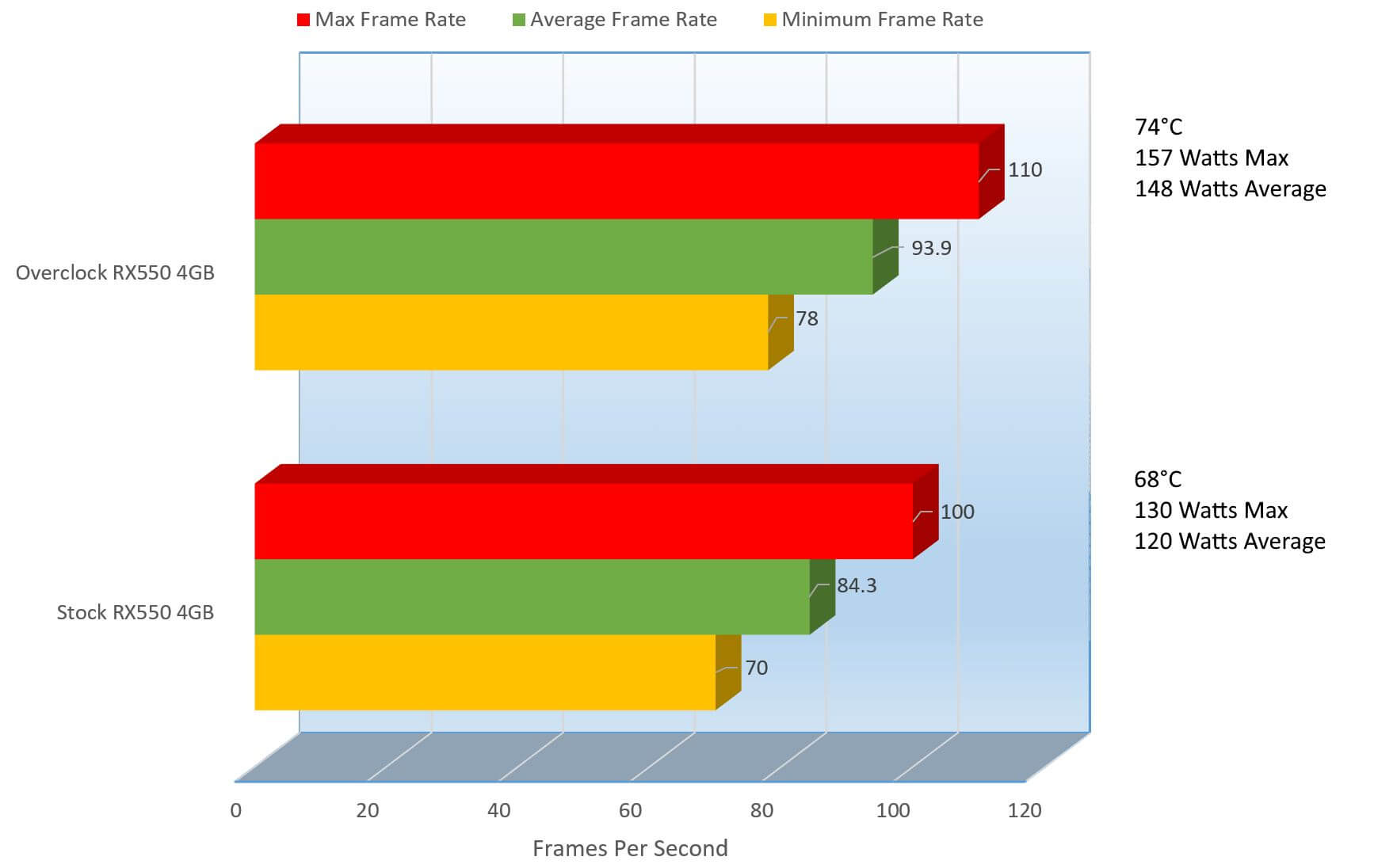 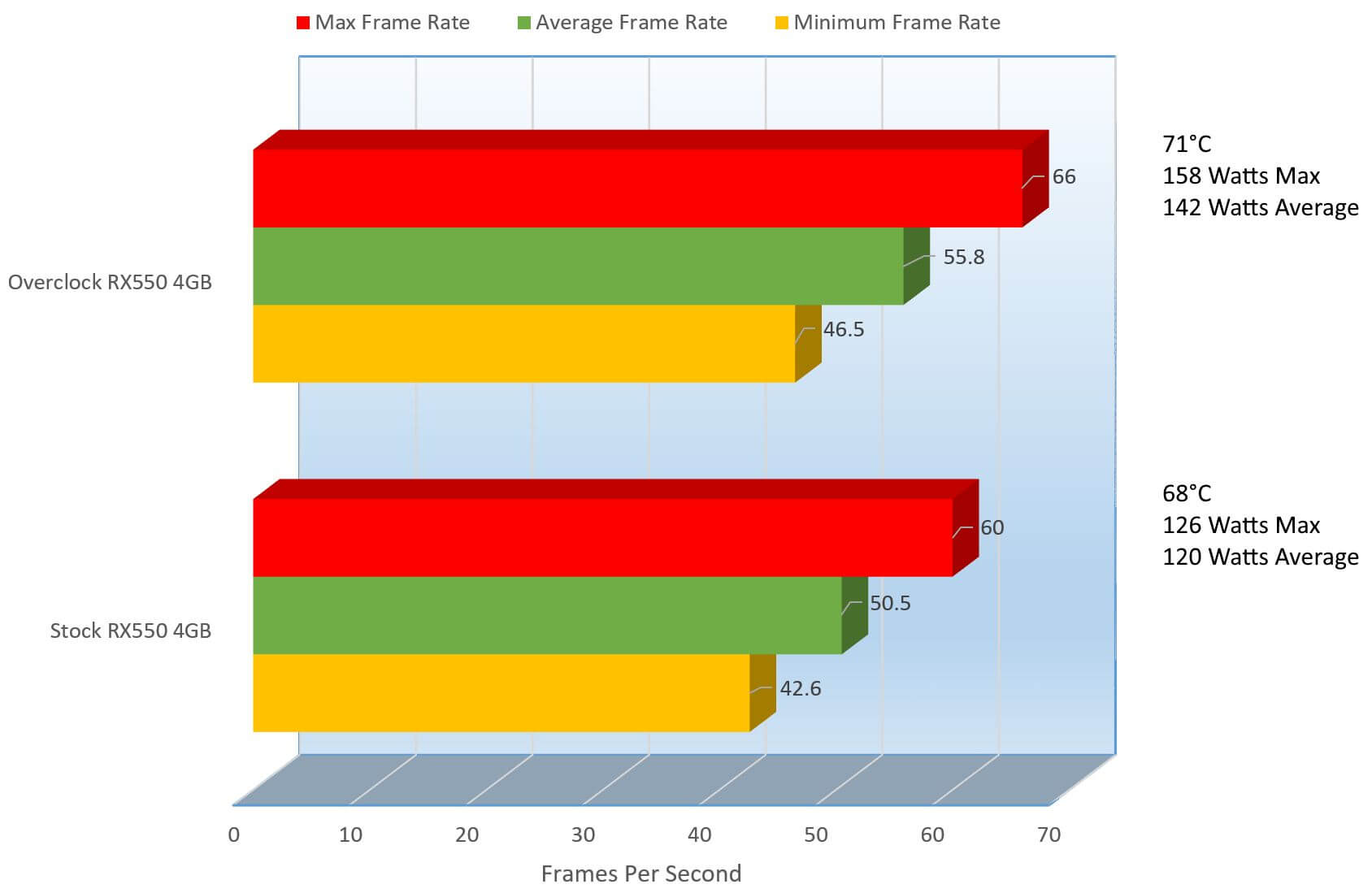 It was right there, surly a little more tweaking I could have hit and surpassed the magic number, though at 55.8 and 50.5 it was perfectly smooth.  I watch all of these benchmarks, both in stock and overclock to see if I can find any sort of issues with the display and not only did I not see an issue, they both ran smooth.

Overclocked we get 55.8 frames per second a 9.50% increase in the performance of the stock score of 50.5 frames per second, a decent little bump.  Of course, with that bump, we see a 3 degree increase in thermals which is not bad.  At 2560 x 1440, we can see wattage being consumed on average at 142 Watts on the overclock, this is 15.49% high than the stock consumption of 120 Watts.

Tomb Raider performed great on this budget card, but let’s challenge it a little more with Tom Clancy’s The Division. 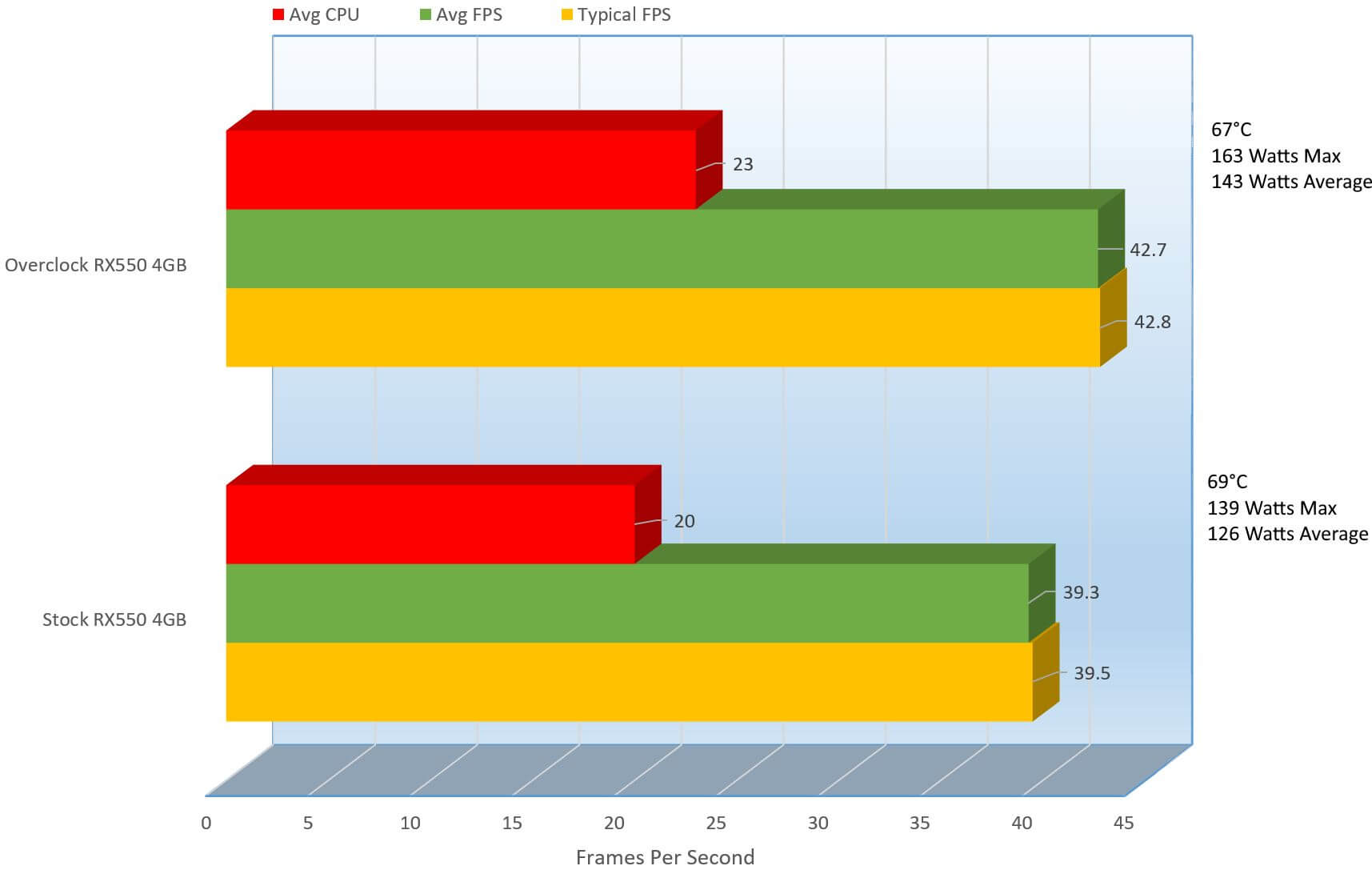 There is a slight improvement here in performance, but from stocks 39.3 FPS to the overclocks 42.7 there was a 7.96% increase in performance.  Temperature actually dropped 2 degrees though power consumption did spike up to 143 over 126 Watts.  On to 1920 x 1080. 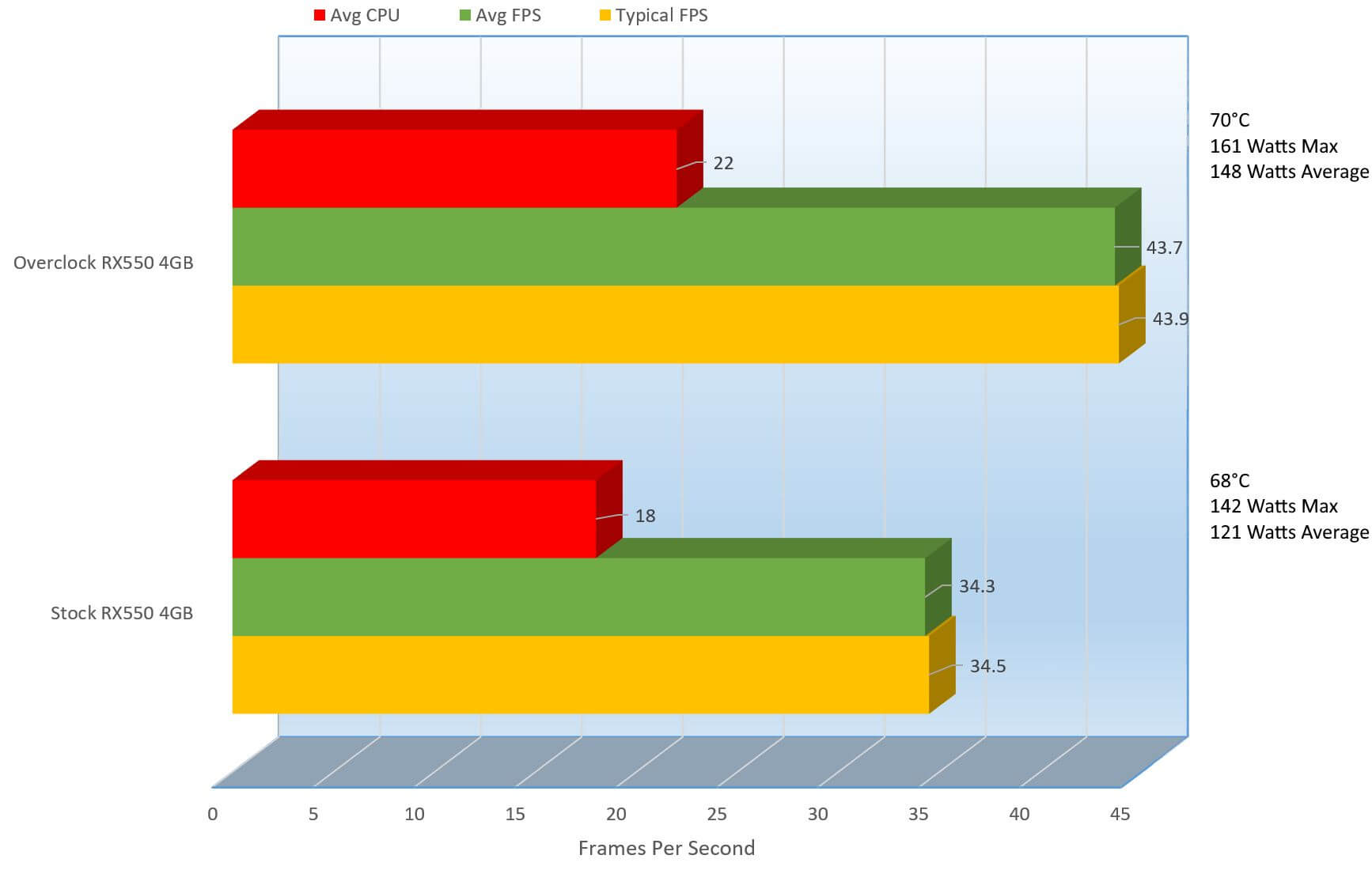 Actually, here the performance improved, came up a little from the lower resolution of 1680 x 1080, up 2.29% but from the stock speeds on the same resolution it rose a decent 21.51% which is very nice.  The Wattage did increase with that as well from 121 on stock to 148 Watts on average, a 18.24% increase.  Thankfully the thermals only increased 2 degrees, better performance for a tiny increase in heat is a good exchange.  Let’s finish this up with 2560 x 1440. 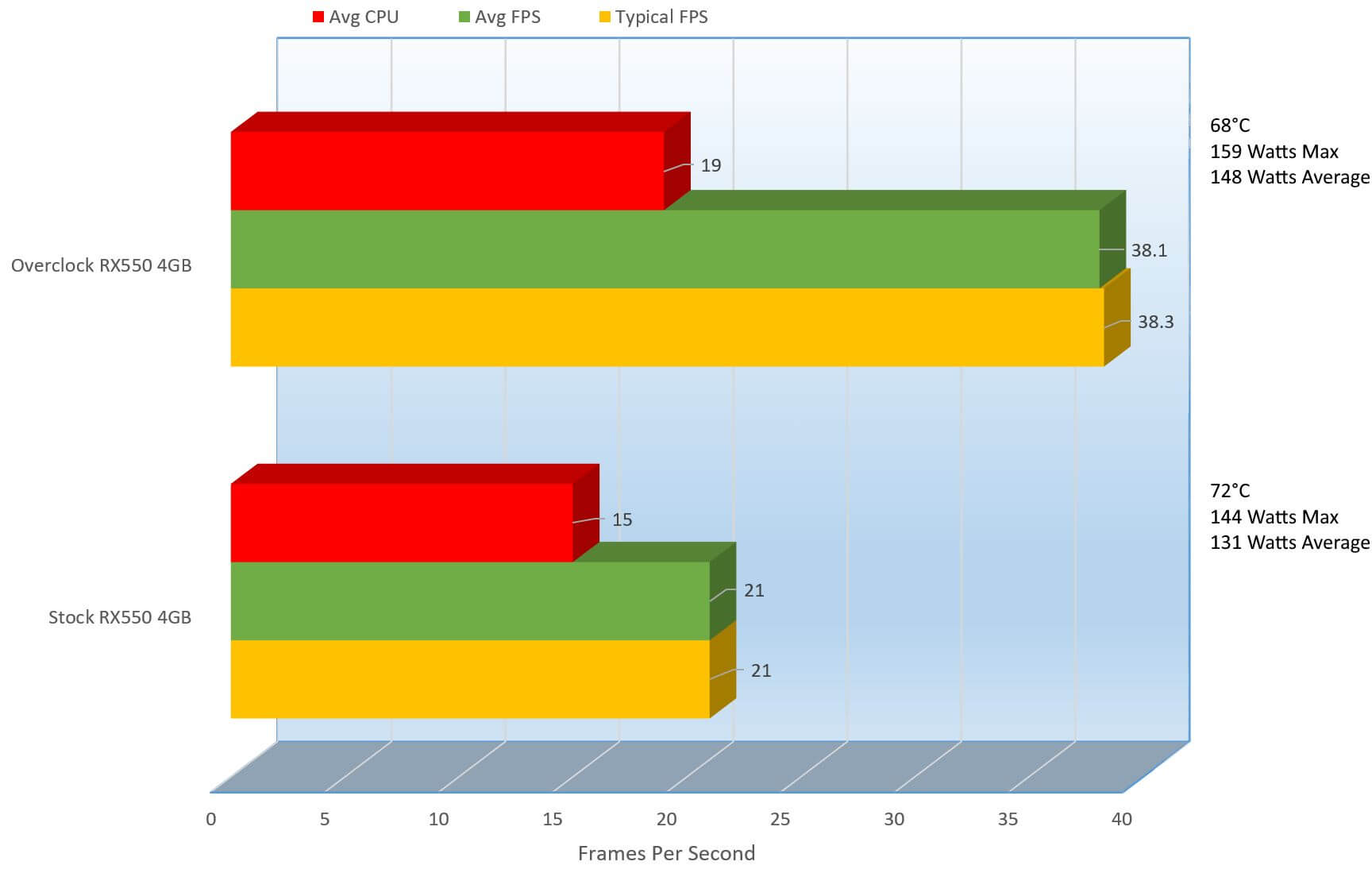 Being that we are at 2K with a budget card and almost get to 40 frames per second is a good sign.  On the overclock, you can see that there was a 44.88% increase in performance, 17.1 frames per second above the stocks 21 frames per second.  The temperature did drop 4 degrees though the power consumption did actually increase by 11.49% from 131 Watts to 148 Watts on Average.

While the settings on this benchmark were set to Medium, some of the settings were high and maybe above what a “medium” game should be played at, so surely playing with these settings at 1080P will get you to 60 frames per second, maybe even at 2K, but don’t quote me on 2K.  Anyway, I want to go into a little more detail as to how TRIXX works and what I did to do what I did.