*Update*
The contest is now over, but you can still enjoy the WonderShare DemoCreator software and see the demonstration.  The software is well worth the $99 dollars and gives you virtually the same functionality and ease of use as Camtasia Studio for 1/3 the cost.

When Wondershare contacted me asking me if I would be willing to review their DemoCreator software, I knew this would be something of interest to fellow bloggers, especially Video bloggers and those who were interested in doing screencasts to record their desktop or activities so they could create training demonstrations that they could upload to YouTube and embed in their blog.
Sure, there are free video and screencast software products out there, but many lack video editing and audio editing options after the fact, plus have the features to allow you to add callouts, transitions, titles, blurs and additional audio tracks if necessary.  This is where I was most interested in seeing what the Wondershare DemoCreator product could do, so I installed it and decided to take it for a test drive.

Here was my video demonstration using the WonderShare DemoCreator software as a desktop recorder to see how easy it was to use and what kind of features it had:

After you install the software you simply run it and start capture mode, you select what type of capture you want to take (full screen), application or a specific size which allows you to specify dimensions. remember to put 1280×720 for YouTube 720P HD, or 1920×1080 for YouTube 1080 HD if you are doing specific window sizing in your capture. 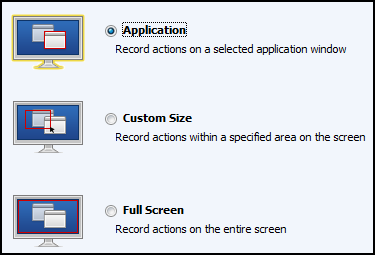 After doing that you can select what type of recording you want to take, frame by frame manual, full motion video, or screenshots. The screen shots feature is call if you want to keep a static unmoving page while you talk and instantly cut over to next slide, without showing any mouse movement or any other popups that might occur. 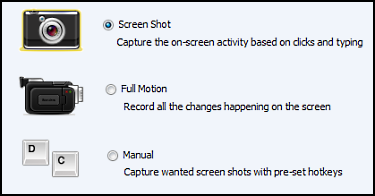 My own experience creating a few video types and files was that the software is fairly easy to use, though it had one annoying feature where you had to remember to turn the microphone recording on before each capture (it defaults to not recording audio) and I found myself recording a whole 5 minute video only to find out there was no audio enabled. Also when enabling audio there is no way to see if its picking up, it should have a preview or test feature where you can talk into your microphone and it let you adjust volume and see if its loud enough. Ironically, even with these microphone quirks the audio in Wondershare DemoCreator came out louder and cleaner than in my Camtasia Studio recording, Camtasia Studio I always had to use the audio filter to filter out background “hissing” that shows up as microphone feedback, but none of that hissing comes out on the Wondershare DemoCreator for some reason. WonderShare DemoCreator also worked well in my Windows 7 Ultimate 64bit Operating System which is good news to report.

Bottom line, WonderShare DemoCreator is a great screen recorder for the price and I am happy to be able to give away some copies to my readers in the contest that I am holding. You can also download and test the WonderShare DemoCreator for yourself for a free trial version, but one thing to note, the trial version of DemoCreator will let you create a video but it embeds a WonderShare watermark.  If you like the software, it may be worthwhile to purchase it if you are serious about adding professional screencast videos into your blogs.

I am giving away full license copies of the Wondershare DemoCreator
to ten lucky contest winners. (yes that is 10 people who are going to get full licensed copies of this screencast software).

The contest to win a free licensed copy of the WonderShare DemoCreator starts on Sunday June 27th 2010and will last until July 25th 2010. Every Sunday I will give away 2 copies of the software and one copy will be to one of my Mailing List Subscribers, and another copy will be to someone who comments or tweets this blog contest on Twitter.

Dragon Blogger is giving away free copies of DemoCreator screencasting software so you can do quality video blogging: http://bit.ly/9BERno

Who wants to win a free copy of screencast software so you can start getting serious about doing video blogging or training demonstrations to upload to YouTube?

The next two winners were chosen (1 winner from the mailing list and 1 winner from leaving a comment/tweet on Twitter).  Congratulations to Kimi and CDHinton (didn’t have a name listed so using 1st part of email).

Two more winners have been chosen and GrrGrrr has won from leaving a comment and Tweeting on Twitter, while Kiesha has won from being picked as a random entry from the Mailing Subscriber list.  I will be sending the full license keys to the winners shortly and remember there are more chances to win.  I am giving away two more copies of the WonderShare DemoCreator product on Sunday July 18th.  If you didn’t win in the previous weeks you can get a new entry by tweeting and commenting on the contest again this week!

Two more winners have been chosen and they are Element321 who won based on a comment/Tweet and AJ who won from joining the Dragon Blogger Mailing List. Both winners will be contacted once the company provides me with the serial numbers for the program.

You can still win, there are two more licenses to give away, and two more winners will be chosen on Sunday 7/25! So if you didn’t win yet, make sure you get one new entry this week for your chance to win.

The final two winners were chosen last night and are CrazyBlogGirl from the Mailing Subscription List and Dan Keller from the comment/retweet.  I have notified the software company and will be sending you your licenses shortly.  This contest is now over but we have given away 10 copies of the WonderShare DemoCreator software, this was an exciting $1000 software license giveaway and congratulations to all the winners.

Please send me feedback and let me know what you think of the software and how it works for you.