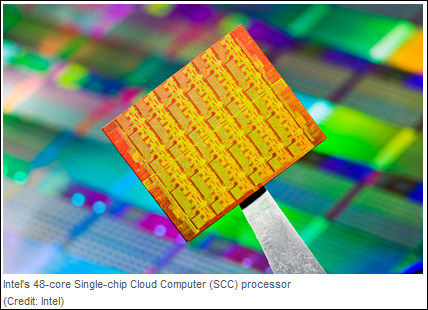 Last week Intel demonstrated a fully programmable 48 core processor that was capable of running standard x86 applications that are found on today’s common Pentium processors. Intel is calling this new experimental chip the Single Chip Cloud Computing and Justin Rattner the CTO of Intel is claiming that these processors will have the capability to allow machines to have the processing power to understand the world around them as humans do which will bring a new generation of powerful computing devices that will be able to perform functions only dreamed of in Science Fiction worlds right now I imagine.

These chips will be linked to 4 memory controllers and each link can pass 64 gigabytes of data per second and a computer using this configuration can hold up to 64 gigabytes of RAM. Intel is giving away 100 of these experimental systems to various companies and partners to further programming research and testing, Microsoft is one of many partners who will be getting their hands on one of the 48 core systems.

Who wants to guess on what type of software or computing programs we will see when these powerful computers start hitting the mainstream?

Owner at DragonBlogger.com
Working in the IT Industry for over 17 years starting with OS, Networking and then moving into web based technologies including authentication and online security. Dragon Blogger has unique insights and opinions to how the internet and web technology works. An Avid movie fan, video game fan and fan of trying anything and everything new.