There are many more people signed up for SponsoredTweets now than there used to be, so my offers have dropped dramatically even though I am charging the same price due to the increased competition. I know that there are still tons of advertisers because of the sheer number of referral earnings I am making just from having around thirty referred people to SponsoredTweets.

I have earned 14 referral earnings in just 7 days off of SponsoredTweets and though you only make 10% of referral earnings this is almost as much as earning from a single sponsored tweet without doing any work whatsoever. 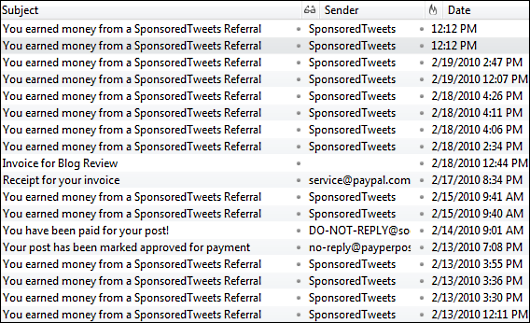 They key to getting better earnings from referrals is to getting higher caliber twitter users to sign up and start using the service, since you make 10% of what a referral gets paid, someone who gets paid $50 per tweet would earn you $5 for a single tweet in referral commission. This however is rare, most people earn me between .10 and .80 cents per tweet in referral commission because most of the big twitter identities have either already signed up for SponsoredTweets directly and not under a referral or have not yet shown interest in signing up for such a service.

I encourage people who have active and social personalities on twitter to sign up for SponsoredTweets as you can make a little bit of money just from promoting some products and services you may already be using and enjoy. I did several blog reviews on SponsoredTweets including how to optimize your cpc for SponsoredTweets and encourage my readers who are curious to poke around and sign up, nothing ever tweets without your permission and you have full control over what you want to say when you promote the product.

Meanwhile, for SponsoredTweets users I encourage you to get referrals because you could be earning even when not directly hired to write sponsored tweets and for me, this is the only earnings I have from SponsoredTweets some weeks.