Super Kid Cannon Launches Worldwide FOR FREE on Google Play, App Store, and Amazon Kindle, and Opts to Contribute 25% of ALL In-App-Purchases Towards Entrepreneurship in Developing Countries via Seeds! 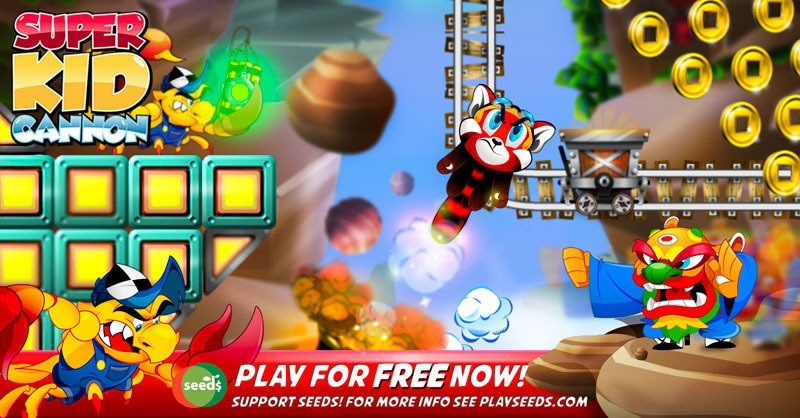 MIAMI, April 8, 2014 /PRNewswire/ — Super Kid Cannon has launched FOR FREE, worldwide, on Google Play,App Store, and Amazon Kindle. Additionally, the Skyjoy team is extremely excited to announce their recent partnership with Seeds, an organization which provides microloans from in-app-purchases to entrepreneurs in developing countries. Skyjoy will be contributing 25% of ALL in-app-purchase revenue in Super Kid Cannon to Seeds, effectively making ALL of the in-app-purchases related to the affable red panda socially responsible.

Skyjoy President Abdulhady “Abboudi” Taher added, “In creating Skyjoy, our underlying goal, besides making great games, was to find a way to stand up for a strong social cause through our games. Now, with Super Kid Cannon and our partnership with Seeds, we can finally do that by giving entrepreneurs throughout the world a chance to be self-sufficient, while giving gamers the gratification associated with giving back to the world.”

Players can now feel socially responsible as they launch Super Kid Cannon on an epic, high-flying adventure through 5 magical worlds consisting of 30 brilliantly diverse levels to save his beloved Justine from the evil snow leopard, Khan. This easy-to-play gaming masterpiece maintains its freshness with an array of beautifully hand-rendered worlds and baddies, diverse and exciting power-ups and skins, as well as breakable blocks, coins, and collectibles to help you soar to a high score. Launch from cannons, sling from windmills, or travel in bubbles, springs, ski lifts, UFOs, and anything else in order to save your precious Justine! Additionally, social integration via Facebook will allow players to compare ratings, scores, and check their friends’ progress in the game via the world map.

So what are you waiting for? You’re not afraid of heights are you? Press download and start the countdown because Super Kid Cannon is ready for blast off on your mobile device or tablet!

SkyJoy Interactive is a Miami-based software development company focused on casual and social games for mobile.

For more about Seeds, visit: http://www.playseeds.com