I immediately replaced my custom groups columns with Twitter List columns and it works great, in addition you can set the priority of tweet updates in your various column types (by default it will update your list columns more frequently than your Reply or DM columns).

When you click to retweet someone’s message, you are immediately presented with a popup asking to do a new style retweet (retweet original message) or Edit and Retweet which is the traditional older method which includes the RT @username in the retweet. This gives you the choice on which type of retweet and allows Tweetdeck to cater to audiences who are in favor or support both retweet function types. 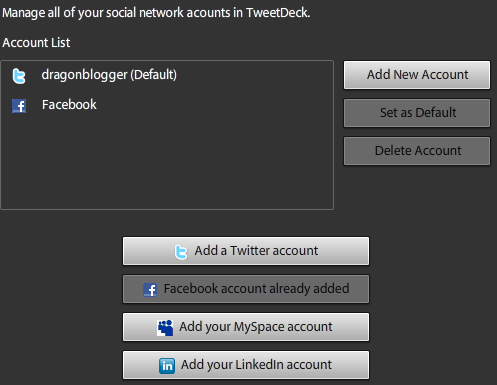 Lastly, TweetDeck continues to slowly integrate additional social networks and now includes “LinkedIn” as a profile you can add and directly update and receive updates from TweetDeck. I am surprised they don’t just interface with Ping.FM or HelloTxt which support almost everything and prevent the need from having to add each individual service directly.

Last but not least, Geotagging is now supported which will include your location when you tweet, and you can choose to enable this feature if you like having your location included in your twitter updates.

You can read the full blog update from the TweetDeck team of Version 0.32 features here.