The end is here for The Twilight Saga film series with Breaking Dawn Part 2 releasing at 10 pm on Thursday November 15.  This is despite the fact that the official release date was November 16.  This was something Summit allowed but they were also strict and said no showings before 10 pm, period. 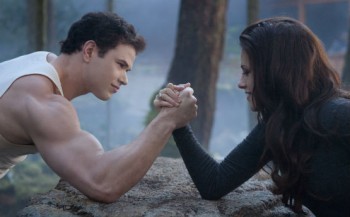 If you have been watching these movies from the beginning, and read the books, then you know this ending is going to be bittersweet.  Here is the last time you will see Bella, Edward, Jacob, and all your other favorite Forks’ residents on the big screen.  However, it is nice to FINALLY see Bella as a vampire.  They did a good job of showing some of the funnier and more important parts of her as a young vampire.  Oh and you do get to see her defeat Emmet in the wrestling match.

Then there is Irina and her setting things in motion for the Volturi visit thinking that the Cullens have done something completely forbidden.  Seeing all the other vampires appear is interesting, especially with the ones that become more prominent than others who are just faces and extras.  Of course, to get through the entire movie with the important parts being hit upon, some things had to be glossed over with the visitors.  And then there is J. Jenkins.  That was a highly disappointing part.  I get that it needed to be short since his part isn’t all that big in the book, but they did a bad job of portraying him I think.

So since you know that there is a fight scene in the movie from the previews (and if you haven’t seen the previews you probably aren’t much of a fan) I won’t spoil anything for you, except to say two things.  One: get ready for a rollercoaster ride of emotions; you will scream, gasp, cheer, and maybe cry (plus a few other things as well).  Two: Stephanie Meyer helped write the script and the ending that includes the fight scene so you can’t complain too much about it differentiating from the book.  Plus I read somewhere that she wished after the book was published that she had written the movie ending for the book because it was too anti-climactic.

For an ending of a series, it’s worth seeing.  As an action movie, it’s interesting to see how the special effects are used.  For a fan, you will walk away mostly happy.  Whatever you do though, stay for the credits.  They show a picture of each major and major minor character with their Twilight name and real name from all five films.