In reviewing several Twitter tools in the past for managing your follower and following lists, I was recently contacted by the creators of iUnfollow.com who wanted to see if their tool could be reviewed and mentioned to readers.  I had some two way discussion on some feature improvements for the website and within a day the developers had a version I felt would be valuable to my readers.

iUnfollow is a simple and easy to use website that allows you to quickly unfollow batches of users who are following you on Twitter.

From the dashboard you can first setup your whitelist which is recommended, this is a list of users who you will not unfollow by accident because you want to follow them no matter what.

After that you can simply click on the Unfollow button and display your followers based on two criteria:  All followers or Non-Followers.

Non-Followers will display all people you are following who are not following you back, it displays them in groups of 3 and you can hover over their names to get information about their Twitter account.  You can unfollow each batch of 3 with a single click, or skip them to look through more users to unfollow. 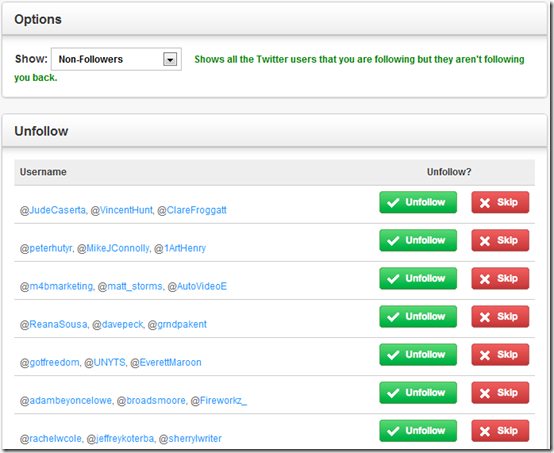 Because iUnfollow allows you to unfollow in batches of three it is faster to process and unfollow people than some other online accounts, but I am not sure if this meets Twitters Terms of Service as far as API call automation or not.  One thing that iUnfollow offers that most other Twitter unfollow tools does is a Statistics and History features which allow you to go back and keep track of who you unfollowed and when you unfollowed them.

The iUnfollow website is also fast and has a very appealing design interface for simplicity with no blocky advertisments or popups whatsoever.

If you are looking to find another way to unfollow batches of your Twitter followers, iUnfollow is another tool in your arsenal and is worth considering.  Remember though to avoid doing too many bulk unfollows in a day, I would recommend unfollowing no more than 300 accounts in a day.