Episode two of The Vampire Diaries was even better than the first.  So many things happened that it’s hard to know which is the most disturbing at this point.  Plus this is the first time almost all of them have been in the crosshairs of someone. 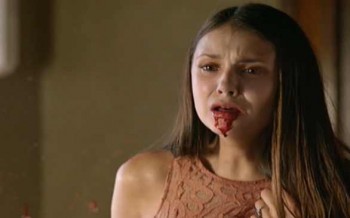 Elena is not adjusting well to being a vampire since her body is rejecting all blood except straight from the vein human blood.  I never thought a vampire could get sick drinking from another vampire.  She wasn’t even able to keep down the bagged blood Damon brought her.  I was surprised to hear Matt offer his blood to Elena, despite their history and the fact that her choice saved him from drowning, because he is so appalled by this condition; it was touching though.  With her as the newest addition to a town where all the youth is slowly becoming supernatural in one way or another, she is lucky to have so many others to help her adjust. 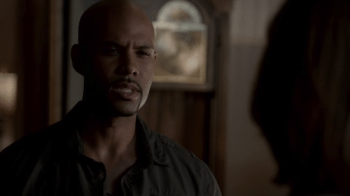 The new villain, Connor, comes with many questions.  Why did he come to Mystic Falls?  How did he know there were vampires in the town?  What did he do to the wooden bullets which Tyler was shot with (and Damon said if he has been a full vampire would have killed him)?  His verbain gloves are ingenious though.  Connor has already shown his dedication to exposing all the vampires, and killing them, since he was willing to sacrifice a young girl by making her bleed to temp the vampires during a memorial service.  I’ve seen rumors that he’s centuries old but if that’s the case, why has it taken this long for him to arrive in Mystic Falls?  And why didn’t The Originals warn Damon and Stefan about him (as there’s almost no way they have been around as long as they have without at least hearing about this guy)?

Then there is Bonnie’s issue.  What will happen now that she has been punished for using black magic?  Will she even continue to use magic?  Heck, will she even be able to since the spirits that help her perform her spells are angry at her dark use?  Currently her story seems to be a back-story but I’m sure it will come to the forefront, especially with Connor hunting her friends.

I think the new villain might even bring back Rebakah and Niklaus but perhaps not since their storyline has run its course.  A united front between them and the Mystic Falls vampires would be interesting though.  Either way the next episode looks to increase the tension even more.