I’m not sure what to think of this week’s The Walking Dead; so much happened although not really that much.  However, I think what did was significant in several ways.  Some people lost, some found, and a whole lotta trouble coming at the main group. 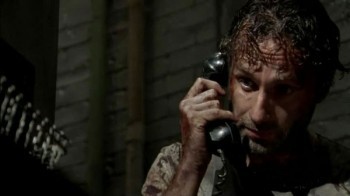 After last week’s episode with Rick answering a phone ringing in the prison, listening to him speak with a female who stated they were safe but wouldn’t say where they were nor how they were without attacks, there seemed to be hope for the group.  Finally a place to go where they could live without fear and Carl and the baby could grow up like normal children.  However, as the calls continued we learned that wasn’t the case.  Actually, it seemed like we learned that Rick had gone insane when his own dead wife spoke to him on the phone, but since he seemed fine after he was done crying and admitting to himself that he should have tried to fix things, perhaps it was the only way he could accept what happened and move on.  After this entire exchange, Rick finally held his daughter and left the prison confines to be in the fresh air. 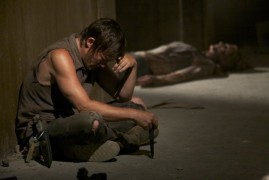 Daryl, Carl, and Oscar work on cleaning up more of the prison and find one door that is swinging open slightly with a dead walker in front of it.  Daryl decides they will get it on the way back and the trio head farther into the area.  Carl and Daryl have a serious conversation about their mothers where Carl admits he shot Lori before she turned so that she wouldn’t.  Oscar finds one cell with shoes that fit him and a single walker appears, but doesn’t last long with the three warriors.  The walker turns out to have Carol’s knife lodged in its chin and after Carl and Oscar return to the rest of the group, Daryl gets angry about her death.  Finally deciding to kill the walker in the room they passed before, he moves the dead one only to find a very weak but very alive Carol.  Daryl carries her out of the area but the group doesn’t see her before the episode ends.

At Woodbury, Andrea volunteers for sentry duty and the Governor tells her they will train her to use a bow.  The girl who claims to be good, and will be Andrea’s teacher, misses twice as a walker heads toward the wall.  Andrea jumps down and kills it with a knife while the girl is yelling that they aren’t supposed to cross the wall (little brainwashed are we?).  When the Governor speaks with Andrea about it, she admits she did like the fights and killing the walker was about the excitement.  He woos her some more and they end up in bed together.

In the meantime, Merle and three other men hunt down Michonne.  Unfortunately, for them, she kills two and wounds a third before running off.  Merle does manage to shoot her in the leg.  The guy who has been injured wants to finish the hunt and kill her but Merle doesn’t want to because she is heading toward the red zone (high walker territory) and kills the kid instead when he won’t lie about it.  Of course, this happens right after they and Michonne get attacked by walkers.  The guts of the one Michonne kills falls on her and, when she retrieves her pack from a tree, she is shocked at first to see a group of walkers go right past her.  Apparently, since she smells like one, they don’t smell her live flesh (we haven’t seen this since the first season). 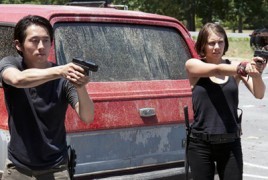 Michonne is escaping to she has no idea where, when she ends up by a store which Maggie and Glenn have just drove up to look for baby formula and some other supplies.  She hides, watching them, and sees Merle find the pair as well.  Merle acts nice but Glenn isn’t buying it.  Merle is able to capture Maggie and force the pair into the truck when Glenn refuses to tell Merle where their camp is so that he can reunite with Daryl.  They drive off to Woodbury, leaving the basket of supplies behind.  Michonne somehow finds the prison and Rick sees her walk up right after the group walks outside with the baby.  His face shows the shock that she is neither a walker nor being attacked.  She has the baby formula too.

At this point, we are left wondering just what will happen to Glenn and Maggie when the Governor sees them and will Andrea find out they are in the town?  Will Michonne trust Rick’s group since she has found them now and knows what happened to two of their comrades?  How long before they all go after Glenn, Maggie, and Andrea?  We can only wait until next week to see what happens on the next Walking Dead for these answers.