I have owned a Nintendo Wii for over two years now and my three year old has destroyed two Wiimotes in that time frame.  The first he drooled over the connector part so it wouldn’t recognize a nunchuk, and the 2nd he dropped one to many times to where the Wiimote just wouldn’t power on anymore without batteries.

I don’t like paying $49 for a new WiiMote and another $20+ for a Nunchuk, so when I was in was in my local GameStop the other day I saw the Wii Pro Pack Mini which is a combo Wiimote + nunchuk called the Wii Pro Pack Mini for $49.00.  The Wiimote is smaller as is the nunchuk and the only downside is that it uses Triple A batteries instead of Double A batteries (so all the rechargeable double A’s I bought don’t fit it).  However the Wiimote and nunchuk are responsive and have a niche rubbery built in grip on the device without needing a sleeve on top.

The device is actually smaller and perfect for my six and three year olds smaller hands, even my wife who is petite and has smaller hands preferred the feel of the small Wiimote.  It is much lighter and you can barely feel any resistance weight, so I prefer the bigger and heavier Wiimote myself, but if you need extra Wiimotes and nunchuks for your Nintendo Wii and/or if you have small kids then the Wii Pro Pack Mini is perfect as you get the Wiimote and the nunchuk for around 1/2 the price of a retail Nintendo Wiimote and nunchuk.  I bought myself both a Black and a Purple set. 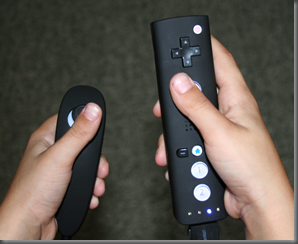 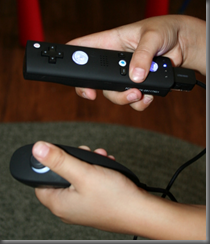 I even found that this same Wii Pro Pack Mini was cheaper on Amazon.com so you can literally get almost two mini Wiimotes and Mini chuk for the price of one by purchasing two of these combo’s. They are light, but have a good clean and stable grip, are padded and fit better for little hands. The fact that they use Tripe A batteries is either a plus or a negative depending on how you look at it.