Those of you who have become accustomed to the gray gradients that defined the signature look of the WordPress dashboard are about to experience a thoroughgoing change in the way your site’s interface looks. Whether the change is welcome depends on your aesthetic sensibility, but there’s no doubting that the WordPress admin center was beginning to look tired and old-fashioned.

The changes to be included in the 3.8 release, which is scheduled to become available on December 12, are the result of a fairly novel development process for the WordPress team. Proposed features and changes were developed as stand-alone plug-ins, which are then integrated back into WordPress core when the developers are satisfied. It’s a development method that is intended to encourage experimentation, better testing, and speedier iteration than would be possible while working directly on the WordPress core.

If you want to give the beta a spin, take a look at this post that covers installing beta versions of WordPress, but you should keep in mind that beta software is by definition not ready for production use, so think long and hard before you upgrade your main site to the 3.8 beta. If you’d like to try it out without installing the beta on your server or hosting account, you might want to try installing WordPress under MAMP on your desktop computer.

The Good, The Bad, And The Ugly

If you’ve played with the MP6 plug-in, you’ll already have experienced the new look admin center. With 3.8, MP6 has been folded into the main development line of WordPress.

The gradients are gone and have been replaced with a flatter, black design and new icons. It’s a fairly radical change when compared to the old look, and will take some getting used to, but it adds a touch of much needed modernity and style to what was an overly fussy and outdated design.

The post writing interface hasn’t seen much modification with the exception of the look, but the less intrusive icons and flat unobtrusive design causes the text entry box to become the most prominent feature, rather than being buried in visual clutter.

The rest of the interface, particularly the widgets, appear to have taken many of their design hints from Google’s new aesthetic, with flat card-like displays. 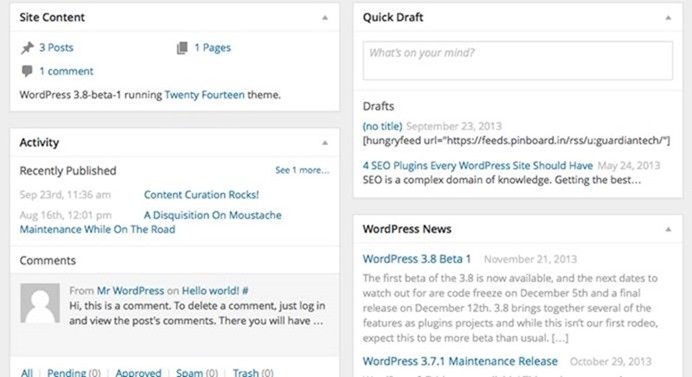 The end-of-year release is usually when the new default theme arrives, and this time around we get 2014, which is significant departure from the colorful 2013 theme. This year’s default theme broke with the tradition of minimalism and added a warm color palette, but 2014 goes back to the minimalist look, except rather than wide expanses of white space, 2014 mixes black and white in a way that echoes the changes to the admin area.

I was quite a fan of the 2013 theme, and I’m less enamored of 2014, but it does make a much needed departure from the traditional list-of-posts format that better reflects the way WordPress is used as often for videos and images as it is for text. 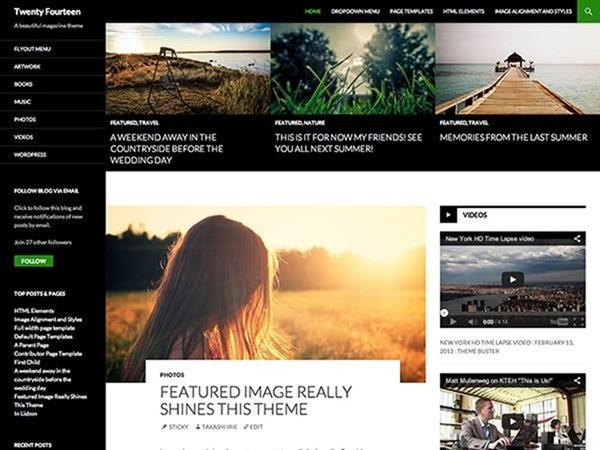 The final significant change is to the Theme selection area, which has been given a complete overhaul and now presents installed themes in a more compelling layout.

Do you like the new look? Is the WordPress redesign a success? Let us know what you think in the comments below.

Graeme Caldwell — Graeme works as an inbound marketer forNexcess, a leading provider of Magento and WordPress hosting. Follow Nexcess on Twitter at @nexcess, and check out their tech/hosting blog,http://blog.nexcess.net/.