Calling all gamers! Did you know the video game industry is worth $100 billion?

We bet you’re not surprised to hear that. Almost two-thirds of American households have a member of the house who plays games regularly. If you’ve landed on this article, you’re probably one of them!

There’s something to be said about the hot new video game. But have you ever thought about taking a trip down memory lane and playing some old computer games? The ones you couldn’t step away from as a kid, teenager, or even grown adult?

You might still have some of these on your gaming shelf—albeit covered in a layer of dust.

Without further ado, let’s get nostalgic together and highlight some old faves that still hold a place in our hearts!

Get your Lenovo up and running and prepare to lose yourself in world domination for a few hours!

Age of Empires, and its many sequels, was a go-to PC game for many a PC gamer. These real-time strategy games had that fun element of urgency, forcing you to age up in the game past your competitors and then use those resources and skills to essentially wipe them out completely, allowing you to declare victory.

In addition to these fun one-on-ones or two-on-twos (or four-on-ones—the options were plenty), you could play campaigns that allowed you to explore the map and complete various quests.

The Age series also allowed you to link up and play with others online so that you could test your skill against your friends’.

Pajama Sam was a fantastic 90s game for children—that also happened to resonate with teens and adults, too!

It was the perfect mix of adventure, mystery, and puzzles that all took place during the nighttime. But with Sam’s trusty cape, his fear of the darkness vanished, and all that was left was bravery and smarts. He navigated a fun imaginary world with interesting characters and missions throughout.

The original Pajama Sam is a favorite, but the game proved so popular that three more iterations came out afterward.

Speaking of adventure and mystery-solving . . .

Freddi Fish and his companion Luther do some sleuthing, too, but under the sea. The entire series yielded five games, but we’re impartial to the third installation: The Case of the Stolen Conch Shell.

When Freddi and Luther attend a festival, they realize the conch shell, which announces the festival’s beginning, has been stolen. Naturally, only they can uncover who stole it and why.

Queue you, the player—can you find the culprit and shift the blame from Luther’s innocent uncle?

Sure, The Sims is a household name at this point. They’ve released an astounding number of series, as well as countless expansion packs that allow you to get creative to the nth degree.

Still, The Sims was revolutionary when it first came out. It allowed you to craft the world of your dreams—or nightmares. Maybe you let your avatar thrive, reaching all their career goals, marrying and having children; or, perhaps you took it the other direction, making your Sim unhappy and poor and single until their untimely death by fire in the kitchen.

Yeah, that was a little morbid, but that’s what made The Sims so fun. There were so many life choices to make!

Diablo, a dark, moody game released in 1996, was another popular old computer game that ended up spitting out three versions of itself. The addictive role-playing aspect of the game kept many PC gamers hooked from one series release to another.

In addition to being a role-playing game, Diablo was also what you’d call a hack-and-slash game. If you’ve never heard of that expression, today’s your lucky day.

Hack-and-slash means that the main character . . . hacks and slashes. They operate in a weapon-based melee system, holding a weapon in their hands and engaging in frequent combat. The weapon can be interchangeable, just like your enemies.

The Japanese videogame series, Resident Evil, was one of the first of its kind: a human vs. zombies saga.

In the game, you played various roles of different humans with a singular mission—to survive at all costs by merking zombies. The reason for the zombies and other such monsters? A pharmaceutical company called Umbrella Corporation.

If you’ve ever wanted to engage in some post-apocalyptic game-playing, this long-standing, beloved series is the perfect one for you.

With Doom, we’re taking our focus back to the early 1990s.

This first-person shooter game takes you into the body of an unnamed space marine. In a nutshell, the game focuses on Hell vs. Earth, but it’s oh so much deeper than that. There’s a little bit of Mars, a lot of fighting, and some casual demonic invasions.

No big deal! Step into the body of your mystery soldier and get to the slaying.

Here we have another post-apocalyptic game that takes place after a nuclear fallout.

It’s your mission to sort through the prevailing wreckage and make another world for yourself, with the help of other surviving vault dwellers.

This FPS (which you should know by now as a first-person shooter) follows Ranger from dimension to dimension. There’s a little bit of everything here: teleportation, fighting humans, magic ruins, Earth invasions—all the makings of a good, exciting video game.

Prepare for a longer stint with this game, as it comprises 30 maps (levels) over the course of four episodes. Each episode represents its own dimensions, so you’ll surely never get bored of what Quake has to offer.

This 90s computer game is an adventure waiting to happen! It’s the third in a series of Monkey Island games, and arguably the one that stole many peoples’ hearts.

Put yourself in the shoes of a wannabe pirate and lift a curse that’s plaguing your love. In the meantime, avoid other not-so-nice pirates (including Buccaneers and smugglers), and watch out for your nemesis, Captain LeChuck.

There’s The Sims, and then there’s SimCity 2000, which grants you the opportunity to build the city of your dreams.

While it sounds easy, there are significant things to keep in mind throughout the world-building. From county ordinances and land surveying to water collection and so much more, SimCity forces you to be a conscious creator. Without following certain rules and guidelines, your city will crumble. 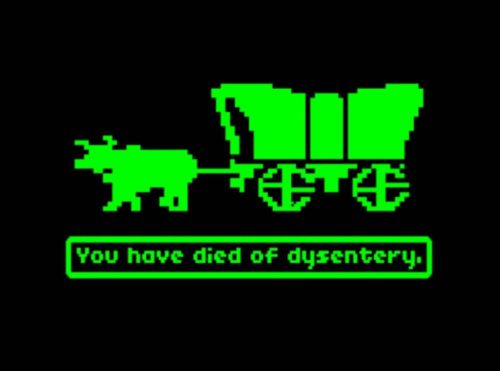 This computer game was so fun, it was hardly remembered that it was educational to boot! It taught its players what the reality of life looked like for pioneers in the 19th century. And here’s a hint—it wasn’t always easy and glamorous.

As the wagon leader, your goal is to lead your crew from Missouri to Willamette Valley in Oregon by taking the Oregon Trail. That entails everything from hunting to dying from a slew of causes.

Your mission is to arrive with as many members of your party as possible, as well as some cash and possessions on hand. The health of your crew matters, too. How will you fare?

Can you find one of the world’s most elusive thieves? Put your mystery-solving smarts to the test in this fun game from the 80s, Where in the World Is Carmen Sandiego? And if you couldn’t guess by now, Carmen Sandiego is your culprit!

You need your wits about you to find Carmen and her gang of henchmen, of which there are plenty. You must complete a series of missions that put you face to face with Carmen’s coconspirators. Use your clue-compiling detective skills to find the next destination of theft, and ultimately serve Carmen Sandiego that arrest warrant—if you can find her.

Which Old Computer Games Will You Dust Off?

These tried-and-true PC games are all classics for a reason.

While you may not have played these recently, they still resonate—bringing back that joyful, nostalgic feeling that only these old computer games can instill. Whether you tried world-building in SimCity or total world domination in the Age of Empires, you likely had a close relationship with at least a few on this list.

Now that you’re in the mood to play some fun computer games, we’ll catch you later. When you’ve solved the mystery of the missing conch in Freddi Fish, come on back to our website and see what other fun trips down memory lane you can take!