When I first heard about Imperial Steam, the first impression was still just “Oh, another route building game with pickup-&-deliver? Railways to .. series again?”. After learning that the designer is Huemer (the designer of the Lignum series), I decided to give this one a try. In my mind, I was expecting a game full of difficult-breathing moments, from the rule book, and the how to play. 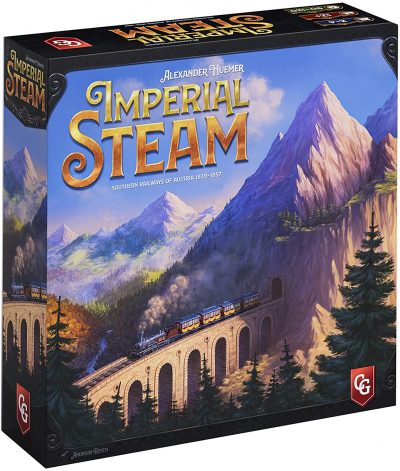 When I first bought Imperial Steam, I saw something strange. The box was a little bit bent already. That’s not a good sign. I checked with the other boxes, and they all share the same problems. Because there are so many punch boards and different components. As I started punching the boards, I could tell that my fingers are going to have a good exercises. The more I punched, the more I realize there is no end to this nightmare. Then, I started to wonder, this will be an absolute nightmare to store all of these components. As a result, I had to go and buy a Plano box right away. And that was a perfect solution.

After finishing organizing the components, I realized this is a table-hogging game. Each player has 2 boards, one is their main board and the other one is the investment board. Then, there will be the big big map in the middle. Next to it, we will have to set up another worker board, a factory board and an area for all the actions. 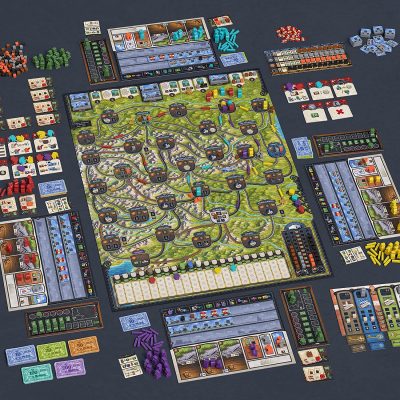 There isn’t a reference sheet that gives a brief guide to the law. On the player board, players can find the references to all the stages. You can find the same illustration style in Gugong. Then, on the 11 action cards, there will be icons illustrating the actions. That’s it. After struggling for a while, I finally had to take out my notes to learn and draw mind-maps at the same time.

The fact is the rule is very straightforward. The game has total of 11 actions in 8 stages. Along with that, there will be 3 free actions; that are totally different from the 11 actions mentioned above. One thing that impressed me was how detailed and explanatory the rules are. In every single action, there will be a step-by-step examples, along with the action’s purpose. These help me a lot in follow the rules.

One thing that throws me off is the limits in every SINGLE action. Let’s pick building roads action as an example. To build a road, the player must satisfy at least 3 conditions. Aside from simply having enough resources, the player must have enough workers whose level is greater than or equal to that of the new city. Also, each city can only has maximum two rail roads (if the city has no stations). Moreover, when players build the road, it has to be a part of the player route network.  And, this is just the first action.

To be honest, I am a sucker for mid-heavy weight games, especially the ones with complicated but elegant rules. Unsurprisingly, Imperial Steam just hits that sweet spot.

In the first 3 days acquiring the game, I played total of 4 sessions. Each game last about 2 and a half to 3 hours. There is one thing that I learnt from all the game session, is how satisfied you can be with your decisions. At the same time, you will have a good brain work out. During the game, the player’s brain will constantly be forced to think, to find ways to optimize their actions and resources.
The game is extremely tight and very punishing. If you make a wrong move, or miss the opportunity, you will pay the price in the next turn. Sometimes, they have to double the effort to make it up in the next turn. Even though, it might not be possible to do it again the next turn. 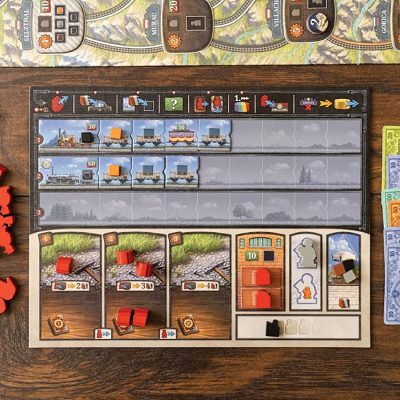 (1) Everyone will build railroad to expand their network. They will try to build to Triestie if possible. In order to construct rail road, it requires qualified workers (2) and resources (3).

(2) If you want a qualified worker, then you don’t use it to build the road, nor send it to the factory. Leave it free and the next round it will evolve to a higher level. The higher the level, the more efficient the ability to build roads (1) and send them to the factory (4)

(3) Resources are extremely tight in this game. Not because it’s rare. But because you will always lack money (5). Sometimes, even if you have tons of them, you can’t get more resources easily money. If you go to the market to buy resources, you can only buy ONE resource at a time. The more people buy the resource, the more expensive it is. If you buy a lot of resources, you have to buy them by making an order. Then, you will receive them in the next round. The number of resources ordered is limited each round. If you want to produce resources, you need workers in the factory.

(4) Send workers into the factory is a way to produce them at the city. The better qualifications the worker has, the more resources will be available at that city. With resources at the city, players can do two things with it. They can either collect it to use for something else. Or, they can use it to deliver to big cities. If they decide to collect it, they won’t have anything to deliver to big cities? (6). Another dilemma is you can only have one worker in 1 factory, and they produce exactly one. If you want to have more factories, build more in any city that has factories spot.

(5) In addition, players can sell shares to investors. Investors are very easy to handle. They give money immediately. But at the end of the game, each investor will get back 10% of the player’s money. In other words, players will have zero money at the end of the game if they have 10 investors. One or two wrong moves, the player will pay the price of the game. Because the game has a lot of things moving constantly. From resource prices to city values, and worker prices. Rest assured, Imperial Steam is a great exercise for the brain.

The game is determined to be for mid-to-heavy weight euro gamers. There is no handicap in the game, nor are there many catch-up mechanisms. The game also does not have a lot of luck factors, so everything is up to the player’s decision. Not to mention there are ways to block other players from doing the actions they want. And especially, the player can control the end game conditions.As mentioned, players need to strategize their games from the first turn.  They also have to plan their tactics about what they will do in the upcoming rounds as well. Once you have chosen a path, it is almost impossible to turn back.

It’s been a long time since a game made me feel so blind. Blind in many ways, from approach to game, strategy, and blind to emotions.. So blind that now, after 5 games, still don’t know how to review. Right now, I just know that I really like Imperial Steam. Love the way the game burns out neurons and brings me to a good night’s sleep about the Austrian railway industry in the period 1839-1857. 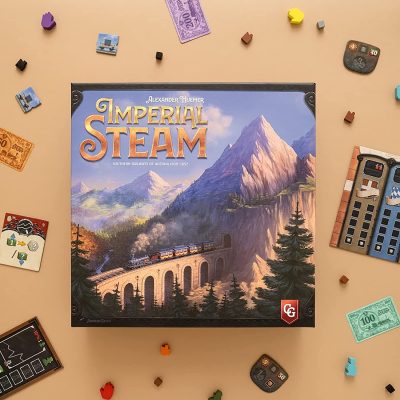 You can buy Imperial Steam at this link