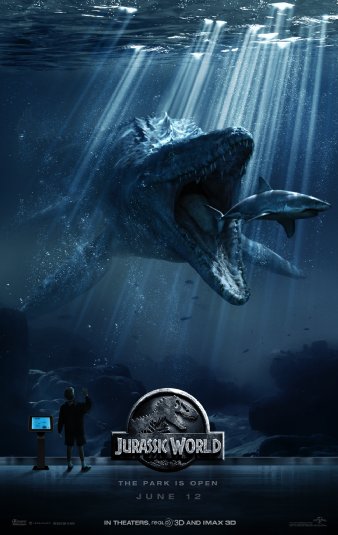 The Lost World: Jurassic Park was completely forgettable and, with the exception of Jeff Goldblum, there’s absolutely no reason to watch it again. With Jurassic Park III, the premise is just outrageous and while the CGI is considerably better than the previous one, it’s still doesn’t better the movie in any way. My favorite part in the entire movie is when William H. Macy says he owns Kirby Paint and Tile Plus which is located in the Westgate Shopping Center in Enid, Ok. While Kirby Paint and Tile Plus is definitely not an actual store, the Westgate Shopping Center and Enid, Ok are real. The only reason I like this fact is because I grew up in Enid, Ok.

Fast forward to 2015 and enters in Jurassic World. A movie that has been in the works since early 2005, it’s definitely gone through some growing pains and I’m sure its fair share of rewrites, directing changes and actors attached to it. What would make a studio attempt to revive an all but dead franchise and what makes them think they can pull it off twenty years after it started? I guess originality being at an all time low mixed with nostalgia and nothing to lose makes the perfect situation to bring Jurassic Park back from the dead. So forgive me if I went into this with extreme skepticism. Don’t get me wrong though, it was a positive and hopeful extreme skepticism.

Jurassic World starts off with a family getting their kids, Gray (Ty Simpkins) and Zach (Nick Robinson) ready for a trip to Costa Rica. The kids are the only ones going due to an ongoing divorce between their parents. Gray and Zach arrive at Isla Nublar, twenty-two years after the horrific events of Jurassic Park and ten years after it reopened. They are suppose to be met by their aunt Claire (Bryce Dallas Howard) who will be watching them and taking care of them during the trip. Unfortunately she’s the parks operations manager and she’s in the middle of negotiating a new contract with some big businesses in an attempt to sponsor their newest attraction, the genetically modified, Indominus Rex. So while the kids are off with the babysitter, Claire is showing off the Indominus Rex to the park owner, Mr. Masrani (Irrfan Khan). He’s unsure of how the newest attraction will perform considering it has been in captivity since birth so he asks to bring in Owen (Chris Pratt). 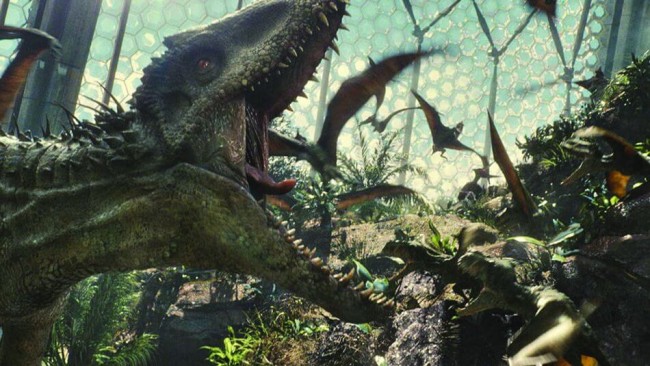 Owen works with a company called InGen, run by Vic Hoskins (Vincent D’Onofrio), and he trains the park’s four Velociraptors. Vic wants them trained for military purposes, which Owen objects to, but Owen’s ability to control them, or guide them, doesn’t help his own cause. Claire visits Owen at his makeshift camper-house and, after some obvious sexual tension between the two is levied, Owen agrees to evaluate the Indominus Rex. As Claire goes to show Owen this abomination, this “more teeth” attraction, they discover the dinosaur is not showing up on any thermal scans. Owen and a few others go into the enclosure to figure out what might have happened and Claire rushes to the control center to issue a containment breach. When she arrives the thermal images show that the Indominus Rex is still in his enclosure with a new meal right at its feet. What ensues after the Indominus Rex breaks out brings the second act alive and leaves you on the edge of your seat as you watch the destruction of Jurassic World.

This movie is very much a tale of two different stories. It is split up almost right down the middle. The first act is a nostalgia overload. Look at the island! Remember this?! Look at the dinosaurs! Remember them?! Listen to the epic music! You loved it right?! Every pan out has it’s own intense theme song. Every pan in is a dramatic event worthy of its own movie. We’re spoon-fed two worthless plot points that aren’t needed, in the family drama with the kids parents, and the love interest between Claire and Owen. This movie would’ve worked just as well, if not better, without these two nagging things hanging over most of the movie.

The second act is so much better. The kids being chased, the Indominus Rex stopping the parks plans at every turn. The surprising betrayal and unlikely alliances that form. The fitting end of some and the timely arrival of others. It ends on such a rush that makes you wish the whole movie was this. I just kept thinking to myself about how I wish the whole movie had been like this. I kept thinking about the inevitable sequel and how amazing it could actually be if done right.

The visuals, for the most part, are stunning. Isla Nublar looks as beautiful and stunning as it did in the original and this time around we get to see so much more of it. The dinosaurs look amazing, but I feel like they might have gone a little overboard with the CGI and when you do see more practical effects used on a dinosaur, it is so late into the movie that it makes you wonder why they even bothered. I understand it was more than likely used as a homage to the original Jurassic Park but it really wasn’t needed. The score, outside of the first half hour or so, was pretty good and really set the tone the rest of the way.

The acting was decent. Chris Pratt is a certified star. He’s going to be in everything from here and out and I’m completely fine with this. Irrfan Khan was enthusiastic and really made me feel like he was in the business for the right reasons. The only one left from the original was BD Wong who plays chief geneticist, Dr. Henry Wu, and he is ice cold! He knows what his team is doing and he’s perfectly fine with this. Everyone kind of just drifts along. Bryce Dallas Howard comes into her own at the end, but by then, its a little late. Jake Johnson and Lauren Lapkus who play Lowery and Vivian, two control tower workers, provide the comic relief when Chris Pratt isn’t in the shot.

All-in-all I must say, I really enjoyed this movie. The plot wasn’t all that spectacular and the nostalgia pill was a little too big for me to swallow but I still went back for seconds. This is the sequel we should’ve gotten after Jurassic Park and it really acts like the second and third films didn’t even really happen. I thoroughly enjoyed the fact that basically the movie premise is based on humans always wanting more. We can’t just leave well-enough alone. We can’t be happy with what we got. We need bigger, badder, more teeth and we need it now! I just hope the next one doesn’t take this to heart and goes overboard.