In this game, you get to build a town, fight warring enemy clans, quell minor upstarts, and build a kingdom. 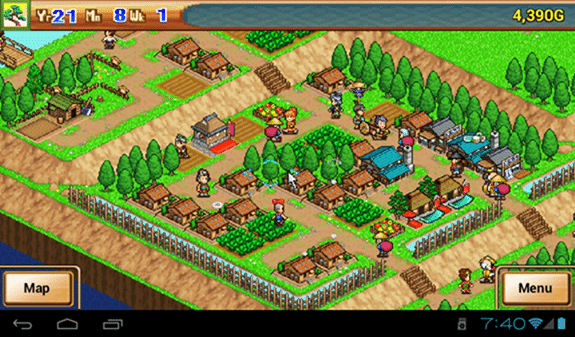 When you start the game, there is a short tutorial that helps you understand the various functions of the game. While doing the tutorial, you will acquire land and extra ninjas. You will need to build basic services like food, shelter, and businesses. All of which will assist you in making money and ultimately fighting battles later on. 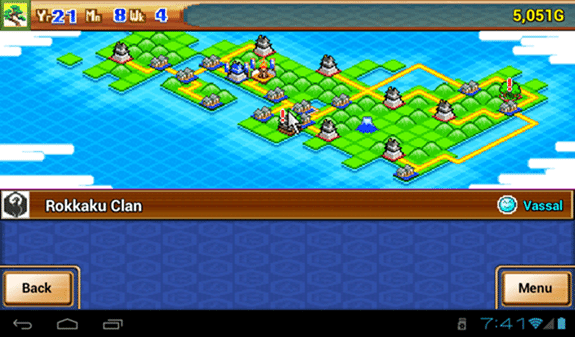 The map above shows you where certain enemy forces are located and where other friendly villages are located as well. There is a training facility that you can go to, to allow you to test out your forces strength, and for participating, you get money and even a new weapon. 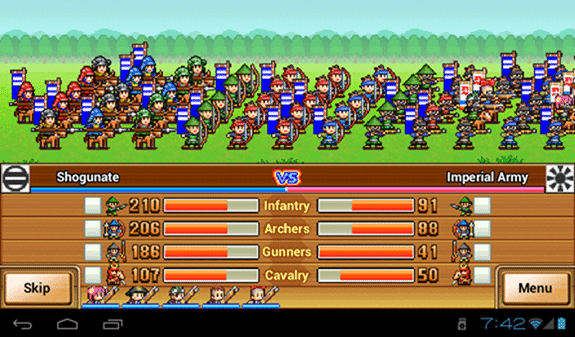 Battles are fairly simple. there is an intro showing the size of your army as well as the size of your enemies army. This can be skipped if you get tired of it. The battle after that is automatic. you either win or lose in three rounds. One hint, before you start the battle, you can arrange your ninjas and choose the best ones to fight with. you can also manually fight but I found that to be difficult to do.

When you win a battle, you also win technology. With that technology you can do research to build weapons, get advanced troop types, and many other things. Check all of the various things out that you can build. And as you update your resources, you may want to update what items your shops sell. Just because you research something, it wont automatically update to the next item in the shops, and you may just be cheating yourself out of valuable finances.

Along those same lines, you need to recruit enough ninjas to run all of your various businesses, and make sure you have enough places for them to live. Now for the good part, you have just over 16 game years to get it all done. That’s right, 16 years, to build up your forces, your money, your lands, your tech, etc. At the 16 yr point, you get your score. But don’t worry, the game doesn’t end. You can continue to play for as long as it takes and even once you beat back all the upstarts trying to take over the country, there are still a few surprises.

This is just one of the many games made by this company. I have played it on both my Kindle fire, and my regular android tablet. It is fun, fairly easy, and no bloodshed. The battles are challenging and kind of exciting. I think you will enjoy this game.