How many of us want to know what it would be like to be perfect versions of ourselves? What if there was a pill that could help you unlock your full potential in everything you do? Want to be smarter than Stephen Hawking? Done. Want to be able to corner the stock market and make your first 10-million dollar return in 3 days? Done. Want to think ahead far enough into the future that you could possibly predict the next preventable disaster that would save the lives of hundreds, maybe even thousands of people? Done. What if I told you exactly where you can find this pill, even if it caused you to be on the run for the rest of your life?

If only it were that easy–I would have taken the pill for myself. 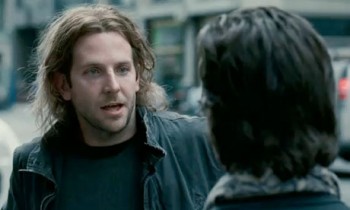 Eddie (Cooper) is what you could consider as a failed writer, or a starving artist. He is on his last dime, his girlfriend Lindy (Cornish) had just about enough of supporting him. Faced with “writer’s block,” his publisher is on him for the book he was supposed to have completed by now, or he has to return the advance money. Overall, Eddie is just all out of luck. That is, until he runs into an old friend–well, his former brother-in-law–who gives Eddie a “smart pill,” and all the trouble it gets him into, with it.

This pill is an un-regulated, FDA approved drug called NZT. What it does is, it helps the brain access 100% of it abilities. Now, no longer suffering from “writer’s block,” Eddie pens his novel within 4 days! His publisher is amazed. The effects of NZT do wear off, however, and without the ‘inspiration’ the pill given to him, Eddie was back to square one. Now, he had to find his ex brother-in-law. But enough of the boring aspects of Eddie’s life. Of course, he gets another dose of NZT. In fact, he gets an entire supply of the pills. In no time, Eddie can speak Chinese, Italian, and can figure out the algorithmics of the Stock Exchange. Doing all this and making a ton of money. Fast. 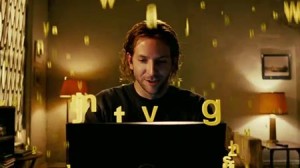 His life is set on fast forward, and all the big players are after him now. His talents in the stock market attract Carl Van Loon (De Niro), who recruits Eddie to give him a key advantage on a huge investment deal coming up. It’s not a problem, though, because Eddie can handle it. When he starts working–thinking–the numbers just appear, raining from the sky, so to speak. He’s at the top of his game, now.

But, what goes up, must certainly come down.

With Russian gangsters eventually following him (he gave their leader a little taste of NZT–now he wants more), a woman left murdered with him pinned as being last at the scene (NZT turned Eddie into an international playboy), and a lawyer who eventually proves how hard it is to trust them (well, this is a given), Eddie begins to suffer the side-effects of NZT. Should he stop taking the drug all together–he’ll die. But why would he stop? With NZT, Eddie instantly acquires mind-bending talents accompanied by mesmerizing visions bringing him big money, beautiful women and limitless success. His dream life, however, soon becomes a waking nightmare, as the drug’s brutal side effects take their toll and Eddie finds himself entangled with a cunning Wall Street power broker (De Niro) who wants everything he has…and more.

Honestly, Limitless could have been a better film–but why should it be? Movies like this just would not work well if it were “too smart.”  With all its shortcomings, Limitless is a damn good film; extremely enjoyable, and just all around awesome! Definitely takes you on a thrill ride. Bradley Cooper is excellent in this film, and De Niro plays a brilliant and convincing conglomerate. It is only in the beginning, the film starts out strenuously slow. But just as Eddie pops that pill, you are whisked away on a whirlwind of adventures and relish in the speed at which our main character, Eddie now begins to live his life. The film is fast and awesomely directed. There just isn’t any downtime.