New Bedford is a city in Bristol County, Massachusetts in the United States. This city has about 100k households (based on 2020 statistics).
New Bedford has another nickname, Whaling City (whaling city). In the 19th century, New Bedford was one of the most important whale ports in the world along with Nantucket, MA and New London, CT. Around 1840, New Bedford was once the richest city in the world.
In 1927, New Bedford ended all whaling. 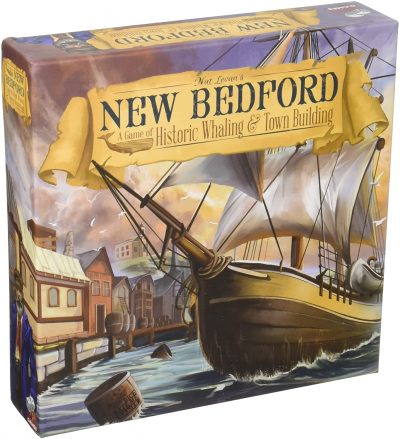 – New Bedford will bring players back to the 19th century and focus on building a coastal city in Massachusetts. The only mechanic of the game is Worker Placement. Each player will have in hand two Workers to use throughout the game. The game lasts through 12 rounds, and each round will have 2 stages: placing workers and catching fish.

– Players will put workers in the Tiles of the town to use. Town tiles will have a bonus effect for first comers. In addition, players can build more Tiles around the town. If a player uses another player’s tile, they will have to pay that player’s owner $1. Players do not spend money when using their own tiles.

– The game’s smartest, and most innovative system, is the going fishing stage. Players will have to spend a certain amount of food to send their boat out to sea. The more money, the farther you go.

– When going to the fishing stage, the whole village will take out n + 1 whale cards from the bag (n is the number of players). There are 3 types of whale cards (2 points, 4 points, and 8 points). There is also a blank card for nothing. The player with the farthest boat gets to choose the first whale card. All boats will also take a step closer to shore.

– When the boat docks, the player must pay for the value of whales they have caught. The more points the whale has, the higher the value. If the player does not have enough money to pay, they will receive 1/2 price from the whale. Then the player sitting on the left will buy that whale. 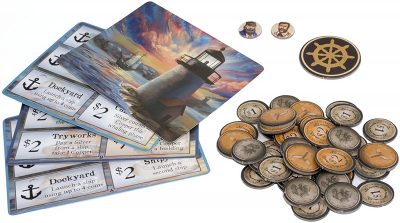 – A simple Worker Placement game, and not too complicated. Players simply bring their worker, trigger the action they want to do to earn more resources, build a house, or get more money. Even though it’s 12 rounds, but with only 2 workers per player, the playing time is not too long

– The best point of the game, in my opinion, is still in the Whale Hunting system. Pushing the boat away requires more food, and more options. But many whales caught means that players will have to have a lot of money to be ready to buy whales when the boat arrives. This system requires the player to calculate and plan carefully. So, catching a lot of whales doesn’t matter. It is important that the player has enough money to buy a whale when the boat docks or not. Not only that, creating conditions for other players to buy whales, the game requires players to always monitor the status of other players, especially when their boat is near the dock. 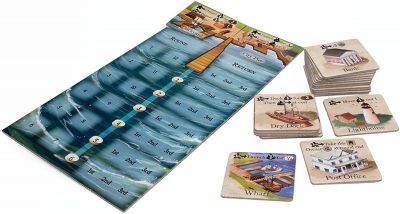 – RULE book!!!! Man! Why are you missing so many things? There are too many Tiles that don’t explain the rules, forcing people to house rules. Not only that, there are one or two houses with typo – misspelled – as well. Did the testers not proofread the rule book?

– The Expansion version makes me feel uncomfortable. In LoWD, Expansion Skullport turns a gateway game into a Gamer’s game. Or with Orleans, expansion Trade&Intrigue introduces new mechanics, increasing player interaction. Or with Viticulture, expansion reduces playtime. But with New Bedford, expansion makes the game strangely smoother. For example, each time whaling, in addition to drawing the elephant cards, the player also has the right to choose 1 of 2 event cards. This event card can give the end game point, or give the player some temporary power up etc. Why isn’t this system embedded in the base game? Not to mention a lot of tiles with functions that make the game smoother. The expansion doesn’t actually introduce any new mechanics at all. Simply add more arrays to make the game more complete.

– A game with a very primitive whaling system (original) and the rules are not too complicated. However, it is difficult to say that this is a gateway game for Worker placement.

– The game will be for you if you like to build a long-term strategy, and meticulous calculation. The game isn’t too heavy on punishment if you fail. In addition, if you are interested in trying out this novel theme, New Bedford is also a good choice.

– The game will hardly be on your cabinet if you are looking for a game with high level of direct interaction between players. The game also won’t satisfy those who want to spend burning all their brain neurons to build and make a grand combo. This game simply does not have it.

You can buy New Bedford at this link