Smartwatches and smartbands are replacing the conventional analog and digital watches like a plague. And today, we’re going to review one of those watches that’ll be a part of that epidemic. So today, we’re looking at the Nuband I smartband. It’s the same company that made the Active+ smartband that we reviewed in the past.

Whereas the Nuband Activ+ used a button for the various task, the Nuband I uses a touch screen for that purpose. But they’ve also taken this one step further ahead, so let’s check it out below. 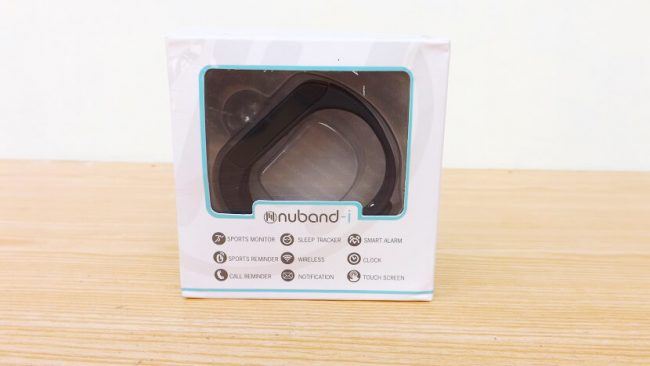 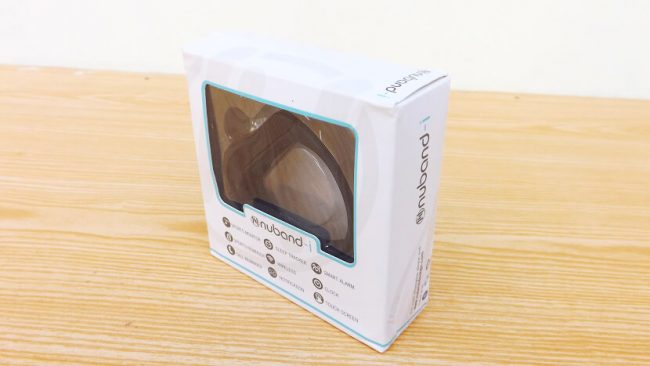 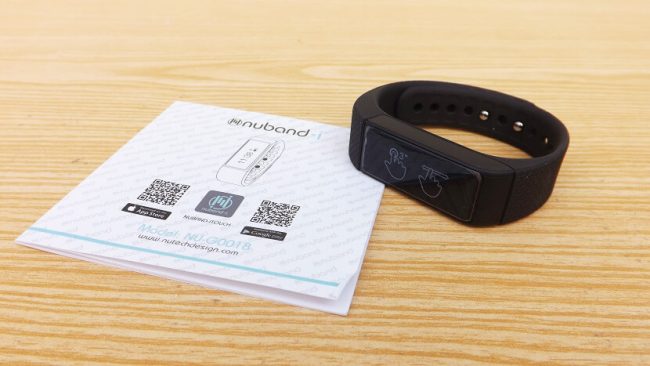 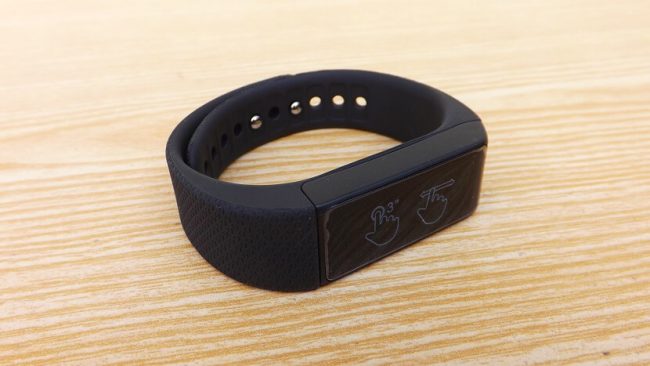 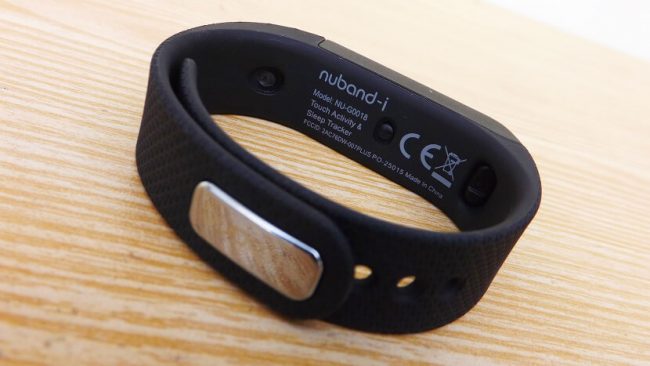 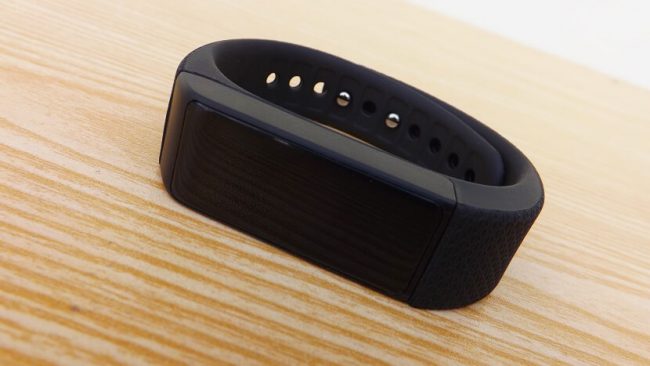 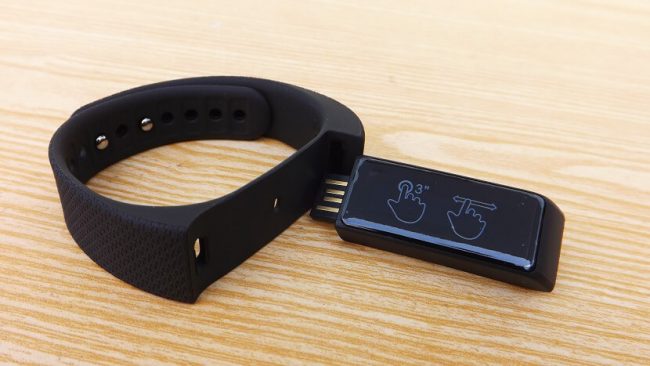 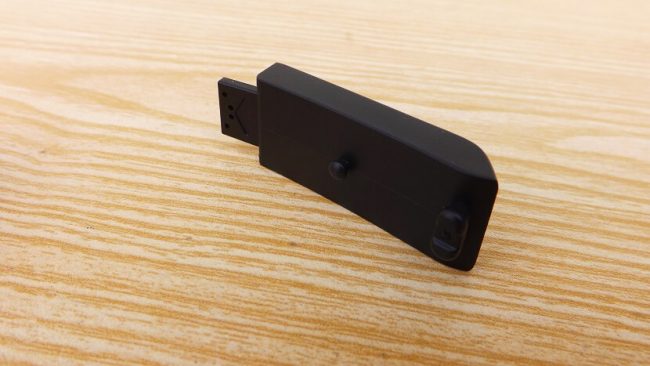 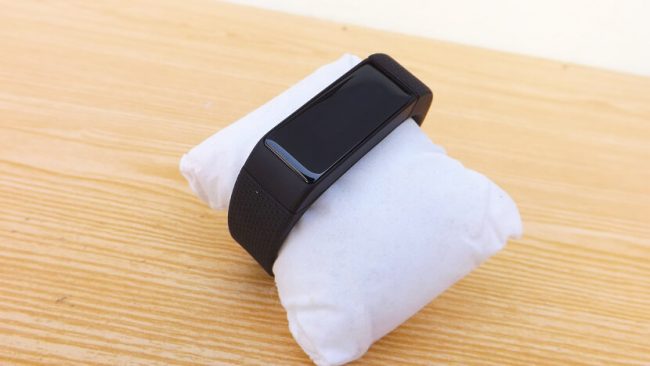 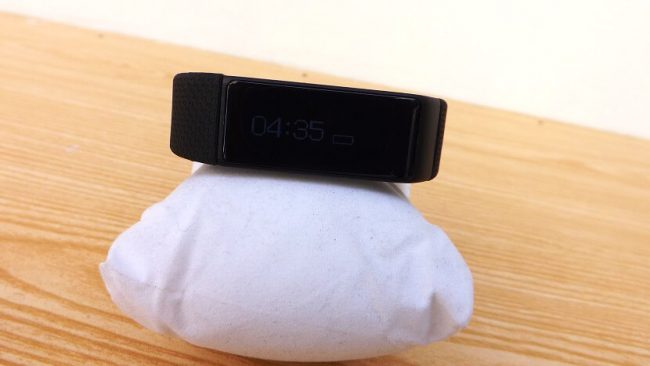 As mentioned earlier, the Nuband I is using a touch screen. Though there’s on thing about the touch screen that I don’t like. It’s that it’s too sensitive. The pattern the watch has for the functions it has is supposed to be like tap for time, left/right swipe pedometer and night mode and tap for the date on time screen, power off on night mode display, and calories burned and distance traveled on the pedometer display respectively. But the screen is too sensitive that my left and right swipes are sometimes noticed as tap which results in random screen appearances. Or it’s just random like that. But I’m pretty confident it’s the sensitivity of the screen since the watch is almost vibrating every time it’s touching a cloth or something while laying down or traveling.

The Nuband iTouch just like the Activ+ has a mobile application for the time, and other stuff synchronize. The application is called Nuband iTouch and is available on both Android and iOS platform. Now the very first trouble I had with the Nuband I smartband was the Android application. The website and the packaging o f the Nuband iTouch clearly states that the smartband is Android 4.4 supported. But once I installed the app on my Landvo S6 (android 4.4), the very first thing it did was freeze my smartphone. I couldn’t do anything with the phone. Not even rebooting the phone helped with the situation, and I had to uninstall the application amidst all the freezing of my smartphone. But once I did, the smartphone was working fine.

Now let’s get back to what the application has to offer. Once you install the application, you’ll need to connect the Nuband I to your smartphone. Just launch the application, and it’ll ask you to enable your Bluetooth function so it can connect to the smartband. The band should show up as Braceli followed by some numbers. I haven’t faced any issues with the connectivity with the smartphone running Android 6.0. 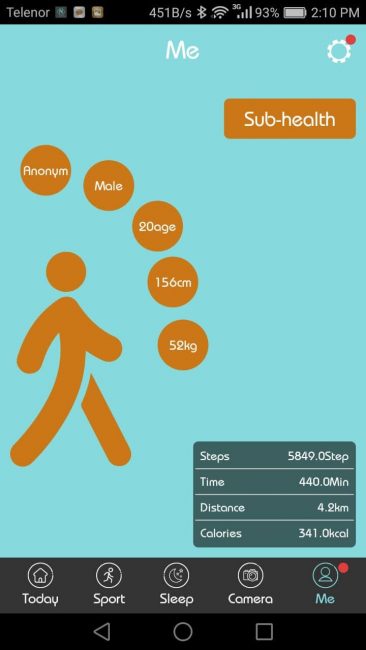 Now once the Nuband I and smartphone is connected, you’re asked about your age, height, weight, and gender, so the application can give you a recommended goal from the start. After that, you’re taken to the home page. 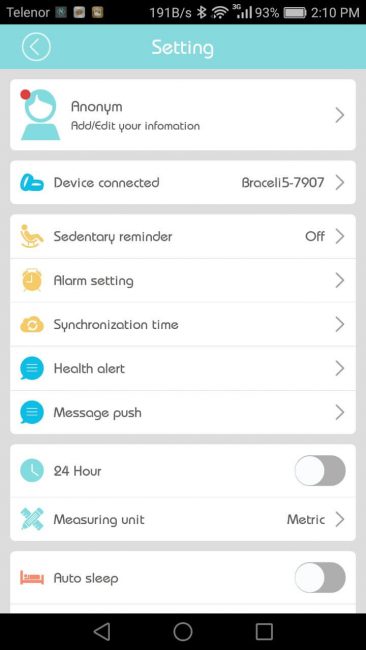 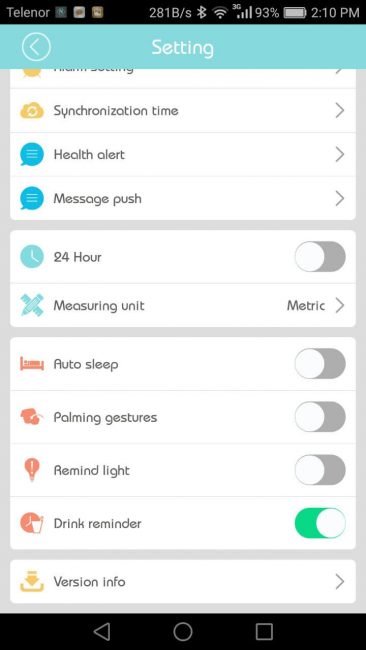 If you click on the cog on the top right corner, you’ll enter into settings. Settings that are available for the band including synchronizing time, which is, of course, a must, sedentary reminder, Alarm, Message Push notifications on the band, change of measuring units, Auto Sleep, Palming Gesture, Light Reminder and Drink Reminder.

As for the breakdown of your daily activity, you have 5 different categories. These 5 categories include your steps taken, distance traveled, activity time, calories burned and sleep monitor. All these activities are in the form of a graph of hours vs activity. Though there’s no mention of which is which in the chart. And you can also judge from the activity graph; I’m not much of an exercising type ;) 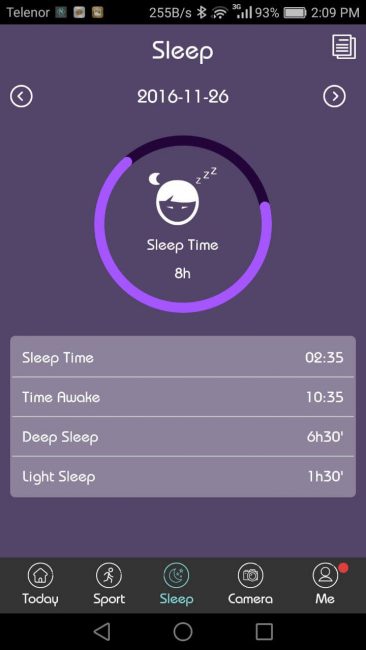 As for the sleep monitor, it has its own tab. But it seems like the sleep tracker is broken or something or I’m just not able to make sense of it yet. First of all, there’s no 24-hour timeline for sleep monitor. And secondly, in the following picture, you can see, that the sleep time in the circle is 8 hours, that’s pretty accurate considering I only sleep about 6 to 8 hours a day depending on routine. But below, we have another sleep timer showing 2:35 hours of sleep, 6:30 hours of deep sleep and 1:30 hours of light sleep. That doesn’t add up to 8 hours of sleep which I had that day. Also, then we have the awake timer, which is 10:33 hours. That also doesn’t add up to 24 hours to complete a day cycle. So right now, it’s only logical to say that the sleep timer is broken.

First of all, the band is not to be used for medical purposes. And secondly, I couldn’t think of a way to measure the accuracy of the smartband as the steps tracker doesn’t update in real-time as advertised on the product page. So one night, I thought about checking the accuracy of the band once it resets. So at midnight, I went ahead and took 64 steps which I counted myself, yet the watch only showed 56 steps. From the looks of it, it seems like the band is off the mark by 8 steps, but I can’t confirm that since the band doesn’t update in real-time. It could’ve updated to the exact amount +- a few steps if I had taken a few more steps to the point where the band updates.

So I can’t deny nor agree on the measurement accuracy of Nuband I, but it still makes up for a good average tracker than to have to count all the steps yourself.

There’s no mention of what type battery is being used in the Nuband I, but the battery takes about an hour and a half to charge from 0 to 100% which gives you about 4-6 days of usage time.

The Nuband I is also IP67 waterproof which means that it is fully protected from dust (6) and can also withstand being submerged in 1m (about 3.3 feet) of static water for up to 30 mins (7). -CNET

Nuband currently has 6 smart bands available in the market and Nuband I to me, have the perfect design. I love how you can just pop out the whole thing and insert it into any USB port for charging. No strings attached. Also, the body and texture on the straps also seem well thought. Compared to Activ+, the strap of Nuband I seems a lot more sturdy and durable. Simply put, the Nuband I is a beautiful, durable and elegant smartband.

Though the Application accompanying the watch can ruin the fun a little bit. Firstly, it doesn’t work on Android 4.4 which I’m sure most Android users have left it in the past, but still, doesn’t work as advertised. And secondly, we have a broken sleep tracker. The application has a user-friendly UI, but it still needs some improvements in the sleep tracker and graph sector. And thirdly, the tracker doesn’t update in real-time once again as advertised. Also, there’s no goal tracker in the watch or the application.

This is not the first time Nuband has let us down with their mobile applications, the application of Nuband Activ+ was also buggy in the beginning. Not sure how it’s doing right now, though. So Nuband needs to make their app game strong for now as The smart bands they make are awesome.

Also the feature I like the most about the Nuband I is the push notification feature which shows your notifications from your smartphone directly onto your smartband. So if you’re laying on the bed and you receive a call, it’s up to you to attend or ignore the call after taking a look at the band ;) The remote camera feature is good as well, but there’s not much use of it unless you want yourself in a large group photo. So Nuband I compared to Nuband Activ+ is more featured packed and better, but let’s talk about the price. The Nuband I is currently available for $69. At this price, you can easily get a smartwatch with a lot more features and also, I managed to find fitness trackers almost identical to the Nuband I available in the market for lower than half the Nuband I’s price. So not only Nuband has to fix their application but also the way the product is priced. So I would rate the Nuband I a 2.5/5 stars for the price and apps issue even though I love the design of the Smartband.